Some impressive logos that made it to the Google homepage over the past few months. 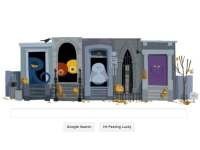 Concluding our series of interesting Google doodles for the year, well, they surely saved the best for the last! From geeks to children, Google's complex art had stories for everyone. Here's our pick for the year-end.

Flying Onboard USS Enterprise
It's been 46 years since Star Trek first beamed on TV, and the popularity of the series has only grown over the years. Google paid a fitting little tribute to the most popular sci-fi franchise ever: A doodle that aimed "to boldly go where no doodle has gone before". The interactive art of the USS Enterprise relayed through the Google logo had several Easter eggs that were decodable only by hardcore fans. How many did you find? Google Turns 14
To celebrate their 14th anniversary, Google tempted us with a cake-themed doodle. While the doodle came up on the 27th of September, that isn't the date when Google was born; it filed for incorporation on 4th September 1998. The first time, the birthday doodle came up on this date on 2002, and the next two years, it went up on 7th September. No-one seems to know when Google's birthday really is!

Slumberland Comes Alive
Little Nemo's Slumberland adventures came to Google's homepage to celebrate the 107th birthday of the comic strip's maker, Winsor McCay. The cartoon strip is iconic in many ways — it was one of the earliest examples of dark humour and violence in this format. Understandably, it wasn't a major hit with little children, but those who enjoyed dark comedy and art — his use of colour and painting technique were considered revolutionary at the time — were instantly hooked. 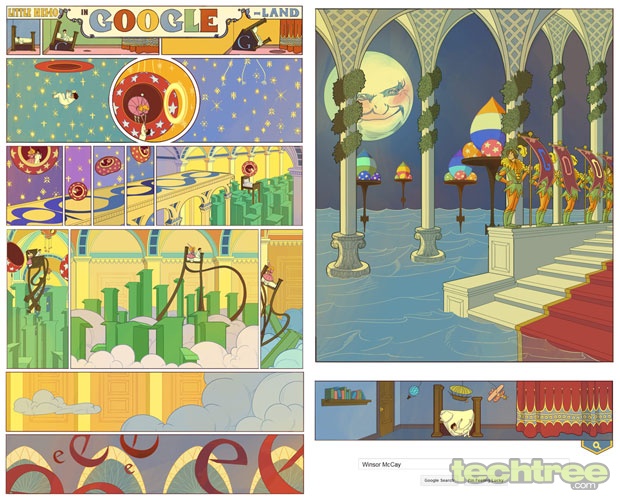 Halloween Shivers
For the American holiday Halloween, Google "spooked" users with an interactive doodle. For me, this was the most interesting doodle of the year. The art is complete with a haunted mansion (don't miss the "13" on the house!), backed by spooky sound effects, black cats, dancing skeletons and fun ghouls. India - A Prism Of Multiplicity
The winning entry in the Doodle 4 Google contest for Google India, titled "India - A Prism Of Multiplicity", was won by a class IX student of Kendriya Vidyalaya, Chandigarh, Arun Kumar Yadav. His doodle, which went up on 14th November (Children's Day in India) shows how youngsters interpret the diversity of the country on the whole. Arun described his art saying: "India has diverse cultures, religions, languages, customs and traditions. This diversity can be witnessed in enthusiasm for sports; unique folk culture; extraordinary remarkable handicrafts; wide range of flora and fauna; agricultural practices with worldwide farming output; unparalleled spices and cuisines... Such colossal diversities represent India's oneness". Little Red Riding Hood
Fairy tales and folklore have been integral to our childhood, and the German brothers Grimm have been part of it for a good 200 years! To celebrate the occasion, a Google doogle telling the story of Red Riding Hood made it to the search engine's homepage. The European fairy tale is about a little girl who goes to meet her granny only to bump into a Big Bad Wolf; it was originally penned by Charles Perrault.