A mixed-bag year that told of some fun, silly, serious, and really interesting tales! 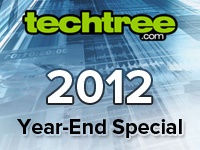 To end our 13-part year-end special series, I have picked the best feature stories that TechTree has done in 2012. Now that 2013 has just started, you can perhaps reflect upon the larger issues surrounding our more serious stories; while the lighter ones are as funny as they were when first published.

There are plenty of links here to TechTree's stories, so do settle down, and be prepared for some fun as well as serious insights.

With the hope that you enjoyed our journey through 2012; with a promise to come up with more interesting insights, the TechTree Team wishes you a Happy New Year 2013!