For those who have more money than sense. Think your iPhone 4S and Samsung GALAXY S III are expensive? Well, allow me introduce you to the crore club, where each phone is a diamond-encrusted vulgarity, with the price equivalent to the GDP of a small African nation. These are phones meant for people who believe that an SOC is what one sends out when they are in mortal danger. The ones who don't care what electronics are crammed within their gadgets, as long as they are encased in solid 18-carat gold.

Welcome to a world where a mobile phone's worth isn't measured in how many million units it has sold, but how few a number of units the manufacturer has produced. These are luxury phones accessible only to those who are very successful in business and \ or crime.

Do you have Rs 44 crore lying idle? I recommend putting it into a new iPhone. How many, you ask? Just one, because this isn't your average Apple product. The Stuart Hughes iPhone 4 Diamond Rose Edition is a phone meant for those who are snobs, even by the standards of Apple users. At GBP 5 million (Rs 44 crore approx), this iPhone 4 gives you unprecedented exclusivity, because only two of these ridiculously expensive phones have been made.

The bezel itself holds 500 flawless diamonds totalling to over 100 carats. The rest of the chassis is fashioned out of exotic materials such as rose gold and platinum, with more diamonds thrown in for good measure. Heck, it even comes with its own hernia-inducing chest, carved out of a single block of granite. Unfortunately, since the iPhone 4 is only 32 GB, you might have to buy both existing models if you must have 64 GB of storage space. GoldVish is a luxury phone maker from Switzerland that was awarded with a Guiness World Record, for making the most expensive phone. The uber-costly phone in contention is the 'Le Million' Piece Unique. Although the body is comprised of pure 18-carat white gold, you won't notice it because every single square millimetre is taken up by 120 carats worth of VVS-1 grade diamonds. What's VVS-1, you ask? Well, they are diamonds that are only microscopically flawed. I don't know about you, but I'd be very disappointed to know that my 1.3 million-buck phone has a flaw - microscopic or otherwise. 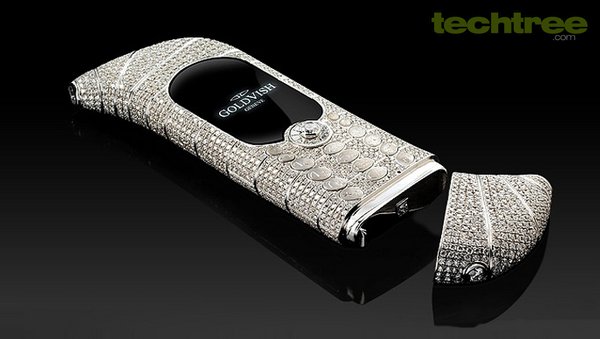 This limited edition handset from the Russian luxury phone maker Gresso is dubbed Luxor Las Vegas Jackpot, for a reason. With a $1 million price tag, you need nothing short of winning a jackpot to afford one. Designed around a Pharaoh-Goes-To-Las-Vegas theme, this phone seems to be targeted at all the rich brothers out there, thanks to its predominantly black theme. Don't believe me? Just look at its list of exotic materials.

You have a bezel crammed with 45.5 carats of black diamonds, and a back panel made from 200-year-old African Blackwood. Even the keys are handcrafted from laser-etched black sapphire. What isn't absolutely black, is another African-American stereotype. I mean the blinged up body cast in 18-carat pure gold by that, which weighs in at 180 grammes. In a nutshell: if you happen to be P. Diddy, this is the phone for you. 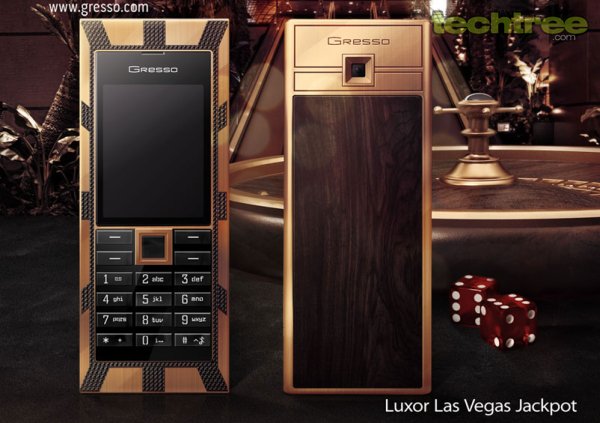 When you're dealing with an ultra-expensive phone named after a venomous snake, you assume that it will have some design cues representing that theme. A bit of serpentine accents integrated with exotic materials perhaps? Unfortunately, subtlety is a virtue lost upon the designers at VERTU. I say that because they have taken this cobra business rather literally, and put an entire snake on it. If I were Samuel L. Jackson, I'd be very angry with this phone.

French jeweller Boucheron has set the Signature Cobra with a pear-shaped diamond, one round diamond, a pair of green emeralds for the snakes eyes, and a whopping 439 rubies for the cobra's body. Fortunately, only eight of these ridiculously expensive, and equally hideous handsets exist. This phone is so expensive that Swiss luxury phone maker Knalihs Athem won't tell you the price unless you drive into their showroom in a Rolls Royce with a boot-load of cash. That's because its Limited Diamond Edition of the BlackBerry Bold is studded with diamonds in various colours of your choosing. The customisation is extended at the rear panel that's fashioned out of denim, leather, or crocodile/snake skin. Let's not forget that under all the bling lies a proper BlackBerry smartphone as well. I guess this is what they call mixing business with pleasure. 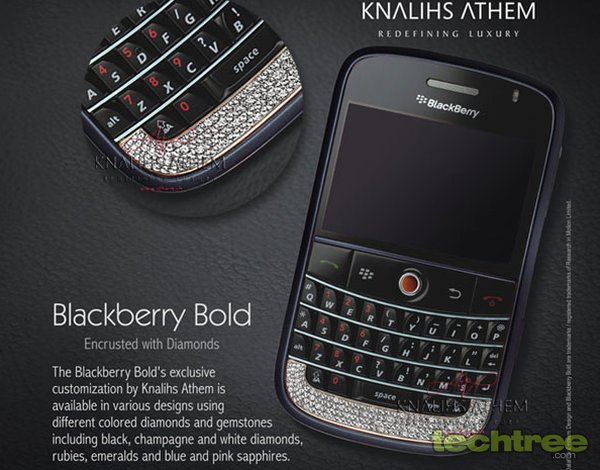