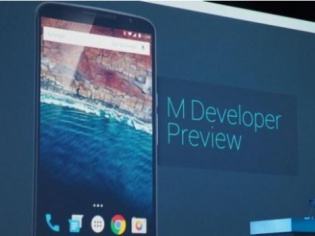 After creating hype lately, the Internet giant Google has finally announced about its much talked-about Android M at the on-going I/O conference 2015.

With this announcement, Google has officially unveiled the next version of Android which will succeed Android Lollipop later this year.

However, the pre-release version is available from today for a few Nexus smartphones; the Nexus 5, 6, 9 and the Nexus Player.

While Android 5.0 Lollipop introduced a new design and interface, the new Android M seems to be working more on the improvement in stability and usability of the software.

Even while the company is announcing what all shall be part of the new Android M, it looks like there is no hint about the actual name of new Android.

Speaking about the new features of Android M, one gets to mainly talk about the newly redesigned apps permissions system where users will be able to approve or deny security permissions, such as camera or location access only when they are using a particular function in an app.

Also, Google is trying to bring in a change in the web browsing experience along with an upgrade in the built-in app linking system allowing apps to open content directly instead of stopping users with a dialogue box every time.

Google is also including a new payment system, fingerprint support, power managing feature known as Doze and support USB Type C for charging which is known to be bidirectional port which can either charge the phone or charge another device as well.

Apart from these main features, Google is said to include a better implementation of Copy/Paste function with a floating toolbar giving you the ability to select the Cut, Copy, Paste options easily and also the new Direct Share feature will let you share images or links and also Volume controls are said to give a drop down menu, which we see on the Cyanogen OS.

With all these features, we definitely feel Android M to be the best Android version so far a smartphone can have.