In an upside-down world, lawmakers get jeered and site-breakers are (sometimes) cheered. 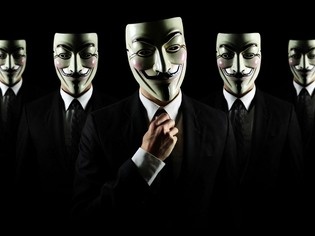 2012 has been a year of protests across the country, and not without reason. While commoners stuck to shouting slogans and holding placards (for the most part), hacking groups were busy defacing the websites of the alleged "bad guys". One of the more famous groups calls itself Anonymous. Boasting of their exploits via Twitter, the hacktivist group has been in the news over much of 2012. Here's a look at their more infamous hacks through the year in India.

Time To "Trash The Current Government"
In May, Anonymous took down the site of the Indian National Congress as a protest against web censorship. This was after Indian ISPs banned The Pirate Bay and Vimeo. In retaliation, Anonymous also took down the websites of the Supreme Court of India and the All India Congress. In true Anonymous tradition, they posted on their Twitter account: "Namaste India, your time has come to trash the current government and install a new one. Good luck."

Dangerous Ishq More Dangerous Than Anticipated!
Soon after "attacking" government and SCI websites, Anonymous' India operations took down Reliance Big Entertainment's (RBE) website along with that of the BJP. Relaince ADAG had initiated a lockdown on sites such as The Pirate Bay and Vimeo to curb piracy on its dud, Dangerous Ishq. Too bad the film didn't do well; if it had, the faces of Reliance ADAG would've at least been worth all the effort.

Twitter Blocks Handle, Anonymous Fights Back With A New One!
After Twitter pulled down the group's @opindia_revenge handle, Anonymous — instead of attacking the microblogging service — defaced Goodgov.in, which talks about setting up a new governance model. This was the first instance where they not just attacked a website but defaced it, with warnings of more attacks. Twitter later restored the group's original handle.

Opposition-Bashing
In May, Anonymous downed BJP Mumbai's website and the parent BJP website, with a message and a nice background score. This was in retaliation for the opposition not having done anything to curb the government's web censorship policies.

The defaced message read, "Today they took away your right to use a few websites... day after tomorrow they will take away your freedom of speech and no one will be there to speak for you. Speak Now or Never".

Mizoram Government Websites Fall
In a bid to mobilise students from the north-eastern states of India to protest against internet censorship, Anonymous blocked several websites of the Mizoram government. A tweet related to this call for action said, "Indians from Mizoram are expected to wake up!! We want an protest organized there too..".

Mamata Didi Gets B*t*h-Slapped
Kolkata CM Mamata Banerjee was soon in the line of fire online, and for good reason: After calling students extremists, celebrating like crazy without a real reason (read: Kolkata Knight Riders winning the IPL), lathi-charging cricket-crazy Kolkata fans, and putting a chemistry professor — who drew an unflattering caricature of her — behind bars, Anonymous decided to teach her a lesson. Not by pelting stones; they took down the All India Trinamool Congress (AITMC) website, redirecting users to the group's Twitter page instead. They said in a tweet: "Please spare aitmc.org the horror | No wait she called students asking queries--> maoists !! #OpIndia #Anonymous".

Peaceful Protests
The group also staged protests against internet censorship on 9th June. Small groups of netizens donning Guy Fawkes masks were seen in cities including Bangalore, Mangalore, Kochi, Chennai, Vizag, Delhi, Mumbai, and Hyderabad. The Facebook page of the group's Indian arm set up event pages to rally interested individuals. But the month to come showed that the protests weren't as successful as was expected, as it couldn't manage to create enough awareness.

The Samajwadi Party Site Goes Down
After lying low for a few months, Anonymous got back into action to take down the Samajwadi Party's site. Facebook and Twitter were being blamed for spreading rumours that caused panic among people of northeastern origin. Rajya Sabha SP leader Ramgopal Yadav, in his infinite wisdom, called for a ban on all social websites. In retaliation, Anonymous took down the SP's site.

Don't Want False Claims
While Anonymous prides itself on being internet vigilantes of sorts, the group made it amply clear — in two separate incidents — that they would not take credit for hacks they didn't cause. First there was a DDoS attack causing a DNS outage on GoDaddy.com. The hack was claimed by Anonymousown3r, which Anonymous said was unendorsed by the group: "(It/he) is misguided, or he's trying to give Anons a bad reputation", @AnonyOps tweeted. Closer to home, the hacker group threatened tech portal ThinkDigit.com for incorrectly linking them to an attack on Dominos India's site. After being asked to issue an immediate apology or "face the wrath of Anonymous", the tech site duly complied.

Anonymous Takes On Kapil Sibal!
Kapil Sibal, our Union Telecom Minister, has had several foot-in-mouth moments, at least as far as his technology quotes go. In view of his remarks on Section 66A of the IT Act, Anonymous dubbed him a threat to online freedom, defaced his home page, and added this text there: "Kapil Sibal is the world's biggest retard. Born with a below 60 IQ he thought he could mess with the Internet and let the elite of his party suppress freedom of speech."

The Year Ends With A Communication Snag
...And for the year-end party, Anonymous picked national telecom company BSNL's site to protest Section 66A of IT Act, instead of going after a politico or industrial biggie. Supporting cartoonist Aseem Trivedi and journalist Alok Dixit, who were on a hunger strike, the defaced BSNL homepage read: "Hacked by Anonymous India, support Aseem trivedi (cartoonist) and alok dixit on the hunger strike, remove IT Act 66a, databases of all 250 bsnl site has been deleted.............Do not think of BACKUP". Why they picked BSNL is a puzzle, though.

Looking forward to 2013, let's just hope Anonymous gets fewer reason for such protests.

Ahh 2012, what a year it was! But why do you want Anon to find fewer reasons to protest - i'm looking forward to cheer them this year IPL-style on big screens at pubs/sports-bars with barrels of beer, good food & some great company. I hope they wont disappoint. :P
Submitted by Vinny the Boo on Fri, 01/03/2013 - 17:23
News Corner