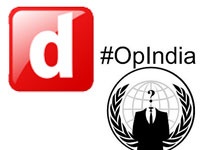 Anonymous India, which until recently was targeting only government websites to protest against its censorship policies, has turned its attention to media outlets as well. In this case, when tech portal ThinkDigit.com reported a news story pertaining to the attack on the Domino's India website, it mistakenly used Anonymous's Operation India logo, even though the group had nothing to do with the incident.

Enraged at this error, the hackers expressed their displeasure and lashed out at the website via its Twitter account, then issued a 12-hour ultimatum to publish an apology or "face the wrath of Anonymous". Needless to say, few want to mess with the might of this hacker group, and as expected, a clarification was made post-haste.

While the fault lay entirely with ThinkDigit.com, it has to be said that Anonymous seems to have overreacted to the error. A better approach would have been to first ask the website to take down the offending image, and issue a threat only if it failed to do so. Since the mistake seemed to be unintentional, flying off the handle liked that seemed entirely unnecessary.

There's no doubt that the hackers are a force to be reckoned with, but shaking a stick at the slightest misstep is rather uncalled for. Do you think Anonymous's reaction was over-the-top, or was it justified? Let us know in the comments. Yeah, i think Anon went a little overboard this time. I thought they should've taken pride in their logo being associated with a break-in like this - but then they wouldnt've got the credit, would they? Again, it's good that they're honest enough to disown this upfront. But then, if they throw their weight around this way, then its fodder in the mouths of their critics. But hey!... Hail Anon!!
Submitted by Vinny the Boo on Sat, 15/09/2012 - 23:25

In this case, Anon was right in wanting its logo out, since there's such a thing as TOO much infamy. If your profile starts increasing, you appear in the sights of more law enforcement agencies. Of course, they didn't have to be so rude about it. But I guess that's the way they roll. :)
Submitted by Badri 'BADJAG' Narayan on Sun, 16/09/2012 - 01:27

I'm not sure if the "laaton ke bhoot" tag can be applied to ThinkDigit. It's not like it has a history of bad reporting or distorting facts. First-time offenders should usually be given the benefit of doubt.
Submitted by Badri 'BADJAG' Narayan on Sun, 16/09/2012 - 15:51

defending your former employers huh? ;) he he he :) kidding. I totally agree with you, slip ups happen, i think whats important is that they are honest enough to admit they are wrong. ThinkDigit has always been a responsible magazine and website. Also, "ThinkDigit.com Gets Bitchslapped By Anonymous!" you guys never fail to crack me up :) love TT, carry on rocking :)
Submitted by MutedCleric on Sun, 16/09/2012 - 16:05
News Corner