Offers an elegant UI, but has a few shortcomings. 
Microsoft's long time partner, High Tech Computers (HTC) has edged past Nokia to become the first manufacturer to ship Windows Phone 8 devices to India. With "Windows Phone 8" branding in tow, HTC is marketing the 8X as a "signature" WP8 handset. Microsoft's mobile platform has been acclaimed for its minimalistic design yet attention to detail, but it couldn't garner a significant marketshare due to various reasons. In its latest iteration though, the folks at Redmond have finally added Bluetooth file sharing and USB mass storage mode along with other enhancements.

Design And Build Quality
What has a colourful polycarbonate unibody, convexly-curved glass, but is not a Lumia? Well, HTC's Windows Phone 8X! While the design may seem inspired by Nokia's flagship handset; the Taiwanese manufacturer has indeed tried its best to bring in some originality. The tapering sides make the 8X feel thinner than what it actually is, for instance. Despire being lightweight, the handset is quite sturdy. The design is quite pleasant, and the soft rubberised finish at the back helps with the grip. However, at a few places HTC has made odd design decisions and overlooked a few things. Take for instance the lock button that is placed on the top, which is uncomfortable for single-handed use.  And then the LCD backlight leaks out where the glass meets the polycarbonate body. That being said, HTC's efforts to achieve a bold design are appreciable. It's quite a welcome change especially when some biggies in the business are bombarding the market with a series of lookalikes. Overall, the design and build quality is good, if not impressive. The 8X sports a 4.3" Super LCD 2 screen with 720x1280 pixels covered by Corning Gorilla Glass 2. With pixel density of 342 ppi, the display is impressively sharp. However, the screen has a mediocre contrast ratio - the blacks are just not deep. In comparison, Samsung's mid-range smartphone, Omnia W's display beats this one hands down. This behaviour hurts the aesthetics of WP OS, where black is used throughout the UI.

This flagship handset is powered by a Qualcomm Snapdragon S4 chipset that combines 1.5 GHz dual-core CPU and Adreno 225 GPU, an 8 mp camera and Beats Audio integration. The full specifications are at the end of this review.

UI And Applications
Let's get straight to the point; the latest iteration of the platform is not only as sleek and fluid as that of the WP 7.5, but is also feature-packed. The unused space on the homescreen, often referred to as the "gutter", has been removed by Microsoft. Users can now customise Live Tiles with three sizes to choose from. The latest version of Microsoft's OS offers mass storage mode for effortless file transfer. You can also pair a WP handset with any phone and share files over Bluetooth. While these additions aren't worth bragging about, but it shows Microsoft's willingness to take user feedback seriously. 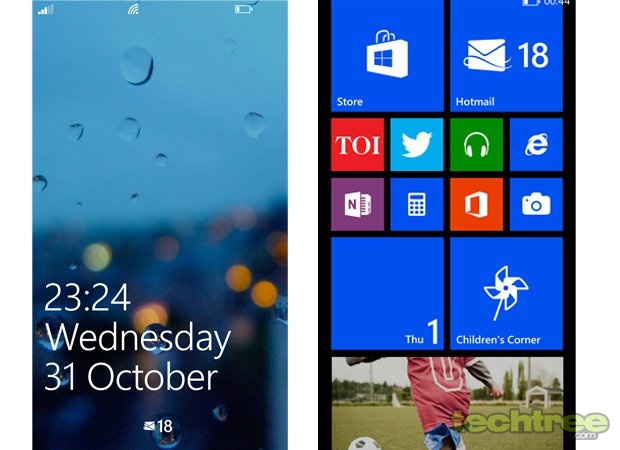 An interesting feature called the Children's Corner lets you create a separate homescreen for your kids (girlfriend, wife, or even friends). Only the selected content will appear in this section — think of it as a guest account for your phone. This way, you can let other people check out your cool new phone without compromising your privacy. Minor changes include an improved lock screen that can display updates from apps, and pull background images from Bing and Facebook feeds. The social networking experience is top-notch leaving other platforms far behind.

Since WP8 Maps are now being powered by Nokia's map data, you can download the India (All) map pack that takes 530 MB or opt for the Maharashtra/Goa map that fits in 126 MB. While offline maps are a welcome addition, HTC doesn't offer turn-by-turn navigation, and currently Nokia hasn't finalised its Drive software for other manufacturers.

Coming to the subject of apps, Microsoft's Office Suite is excellent. The mobile version of IE10 is blazing-fast at page rendering. If you own an Xbox 360, then Smart Glass is a must have app for you. It not only works as a controller for your console, but also comes in handy for text input. Microsoft's Store, previously known as Marketplace, has around 125,000 lakh apps, which should be enough for most users, but it's certainly no match for Google Play or Apple's App Store.


Multimedia
As already mentioned in the review, mass stoarge mode has been added to the platform. Therefore, you no longer require the (highly-annoying) Zune software to manage the media collection on your phone. The music player's offers a neat and clutter-free interface. On the downside though, it lacks equaliser settings. Moreover, HTC has decided to do away with the FM radio. Now before you exclaim, remember that the iPhone too does not have an FM radio receiver, and neither do the Nexus smartphones have). The 8X is the first WP device from HTC to feature Beats Audio integration with a specialised amplifier chip. Thankfully, it's not just a gimmick, and the phone actually delivers splendid sound quality. Due to the platforms restriction though, you don't get equaliser settings. The phone plays 720p quality MP4 and WMV videos, but with a slight stutter. With Snapdragon S4 inside, I was expecting better performance.

The 8 mp autofocus camera offers many settings such as face detection, white balance, exposure, contrast, ISO, saturation, contrast, and various effects. The camera also offers Lenses, which are actually photo apps that can be integrated right into the camera's UI. This includes anything from AR software to funky photo-filters. The resulting images, however, aren't great considering the handset's price tag. The colours look fine, but it comes with noticeable amount of noise. HTC's much hyped BSI sensor does very little to improve the quality of low-light shots. The device is capable of recording 1080p video at 30 fps in the MP4 format. Playback is smooth and the clips contain good amount of detail.

Instead of a plain phone book, Microsoft's OS features a People Hub. It brings all your contacts from Facebook, Windows Live, Twitter, and LinkedIn to one place. The social networking integration runs so deep that if someone pings you through FB, that person's message gets stored in the inbox (Messaging Hub). What's more, the WP8 keyboard is extremely responsive and thoughtfully designed.

The handset's call quality and network reception were good during our tests. I had no issues with the 8X's wi-fi signal reception. Thanks to Bluetooth version 3.1, sending files to another device was a breeze.


Battery
With the 1800 mAh battery the 8X can survive a normal work day's usage. If you're a movie buff, this phone can last for around 5 hours of video playback.

Verdict
The WP8 OS is definitely the USP of this handset. Moreover, the trendy design and impressive sound quality are the 8X's plus point. On the other hand, I feel that its display and camera could have been better. If you're not nitpicky about these, then HTC's Windows Phone 8X is worthy of your consideration. Otherwise, it's wise to wait and see what Samsung and Nokia have to offer.