An impressively built phone, but the display could have been better. 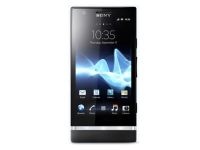 
The Xperia P doesn't boast of a powerful CPU or big screen. It instead emphasizes the design and user experience. This is actually a good thing, considering there's hardly any good-looking Android handset under Rs 30,000. Let's find out if Sony's latest handset has achieved the right balance between style and performance.


Design And Build Quality
The retail box comes with the phone, charger with detachable USB cable, and earphones, but without a micro-HDMI cable. The phone measures 4.8" (l) x 2.3" (w) x 0.4" (11 mm) (d) and weighs around 120 grammes. The handset features a simple yet elegant design, and looks identical to the company's flagship Xperia S. The Xperia P is probably the first handset from Sony to sport a metallic body. Its construction is quite sturdy, and the curved back provides a comfortable grip on the handset. Sony's iconic illuminated transparent strip is also present. However, you can't change the its colour, a feature I really liked in the Xperia U. Even so, Sony has done an impressive job with respect to the design and build quality. The gadget's 4" scratch-resistant screen has pixel dimensions of 540x960, giving it a good pixel density of 275 ppi. Sony claims that with its WhiteMagic tech, the display offers double the brightness when compared to normal LCDs. After having tested the screen in real-world conditions, it's safe to say that this is one of the brightest non-AMOLED panels in the market. Its sunlight legibility and viewing angles are also good. On the flip side though, the blacks look more like dark brown or grey.

The handset is powered by a 1 GHz dual-core CPU with 1 GB of RAM. Here's the list of detailed specs: The Xperia P runs Android 2.3 (Gingerbread) out of the box. The custom UI is exactly like what we've seen on the Xperia S and U. The interface is snappy, and offers some nice transition effects. Since the Xperia P's ICS update had recently reached Indian shores, I attempted to refresh the software. Being an unlucky chap, the process turned out to be quite painful for me. During the installation, the gadget became unresponsive, and since its battery isn't user-accessible, I had to wait for it to drain out on its own. As they say though, "Sabar ka phal meetha hota hai". Once restarted, the phone worked very well with Android 4.0. The dual-core CPU had no trouble handling the new software. All in all, Sony seems to have learnt from its mistake with the arc S.

In terms of gaming, the handset performs better than its expensive sibling the Xperia S, leading me to conclude that the Xperia P's Mali-400MP is a better GPU than the S's Adreno 220. The browser supports Adobe Flash, and thanks to the powerful CPU, can handle up to 1080p web videos. However, it becomes a bit slow while rendering script-heavy webpages.

The music player's interface is easy to use and full of eye candy. Sony has provided a plethora of equalizer settings along with various surround sound presets such as Studio, Club, and Concert Hall. More importantly, the phone's sound quality is very good, and the bundled IEMs are excellent to boot. The Xperia U Xperia P supports MP4, DivX, and XviD videos up to 1080p. Additionally, it can also play MKV files, albeit at low bitrates. Sony's much-hyped BRAVIA Engine enhances the picture quality to some extent. However, the display's tendency to render unimpressive blacks can be very annoying while watching dark-themed movies.

Moving on to the camera, the phone offers an 8 mp lens coupled with an LED flash. Similar to what we have seen on the Xperia S, it includes features such as the Sweep Multi Angle and 3D Sweep Panorama. In Sweep Multi Angle mode, you click the camera button and move the device in the direction indicated onscreen. The phone then combines these images to form a single animated image that with a sense of depth. It's a fun feature available only in Xperia phones.

Photos taken by the camera contain a good amount of detail while keeping noise levels in control. The handset is also capable of recording 1080p video at 30 fps, with an image stabilisation feature to eliminate camera shake. Clips are saved in the MP4 format and offer smooth playback most of the time. Click here to view the video sample.


Telephony, Messaging, Battery Life, And Verdict
The device's network and Wi-Fi performance were satisfactory throughout the review, and there were no issues with voice quality either. The onscreen keyboard is comfortable to use in portrait mode, and gets even better in landscape. The smartphone's 1300 mAh battery can last up to 5 hours under heavy use. With normal use though, it can easily get you through a normal working day. Although some users have reported a significant increase in battery life post the ICS update, I found a slight improvement of 10-15 minutes.

Available for around Rs 23,000, the Sony Xperia P scores with its excellent design, great sound quality, and a good 8 mp camera. On the other hand, releasing such a promising handset without installing ICS out of the box was a bad move. While it's still a good deal Android fans, those looking for a better screen should go for the slightly cheaper Samsung GALAXY S Plus. Other handsets worth considering in this segment are the HTC Sensation and Nokia Lumia 800.

Hello Sandy, thanks for bringing it to our notice. We have updated the handset, and modified the review accordingly.
Submitted by Chandrakant 'CK' Isi on Wed, 10/10/2012 - 18:13

i do not know why you said "However, considering that installing Android 4.0 turned the arc S into a lagfest, I'm sceptical about the Xperia P's future. " Xperia Arc S is single core only while this is dual core.. ad it is snappy even on ICS. :)
Submitted by Pankaj Gupta on Wed, 12/09/2012 - 15:15

Hi Raghav, Limited viewing angles mean that the display shifts colours if viewed from different directions. If you don't care much about the Xperia S' 12 mp camera and a relatively bigger screen, then go for the Xperia P. As of now, Sony hasn't announced the Jelly Been update for any of them.
Submitted by Chandrakant 'CK' Isi on Mon, 15/10/2012 - 12:07
News Corner