The Japs are back in the game. 
After parting ways with Ericsson, Sony has brought out its first flagship product, the Xperia S. This latest Android handset features a pixel-packed 4.3" screen, with the much-hyped BRAVIA engine. Additionally, the phone features a 12 MP snapper, which is something you don't usually see on most Android devices.


Design And Build Quality
The retail box comes with the phone, charger with detachable USB cable, and earphones. Sadly, there's no micro HDMI cable inside the box. The phone measures 5" (l) x 2.5" (w) x 0.4" (11 mm) (d) and weighs around 144 grammes.

Unlike Sony Ericsson phones, this handset from Sony has a clean design. The body is composed of scratch-resistant glass and matte plastic that makes it look decent. Additionally, the curved back provides a better grip over the device. Another nice touch here is an illuminated transparent strip placed below the three capacitive keys. Since the icons for the capacitive keys have been placed on the illuminated strip, you're likely to press the icons instead of the actual keys. Although it's a bit confusing at first, you'll get accustomed to it rather quickly. 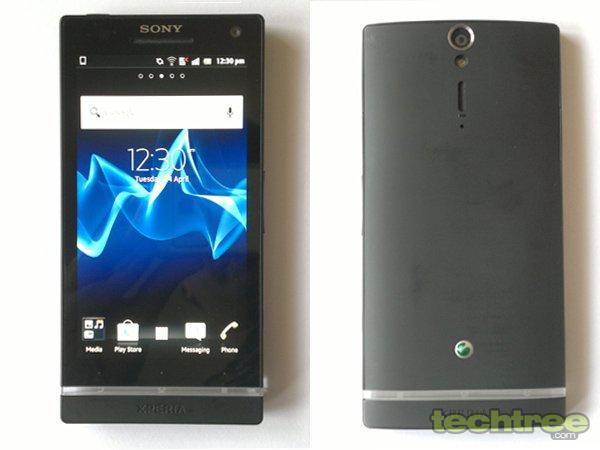 The microSIM slot can be accessed by removing the back cover. However, the battery is not user replaceable. To sum it up, the phone has a pleasant design and great build quality.

The handset is powered by a 1.5 GHz dual-core CPU, coupled with an Adreno 220 GPU. Other specs include a 12 MP primary and a 1.3 MP front camera, 1 GB of RAM, Wi-Fi, Bluetooth, GPS, NFC, a 1750 mAh battery, and a bunch of sensors. Although there's no microSD card slot, I think that the 32 GB of internal memory is more than enough.

The gadget's 4.3" LED-lit LCD panel has pixel dimensions of 1280x720, with the pixel density being as high as 342 ppi. The screen is bright, but its viewing angles are very limited. The display's sunlight legibility is strictly OK, and the blacks aren't very deep. On the bright side though, the display is very sharp and has an impressive contrast ratio. The Xperia S features Sony's custom UI on top of Android 2.3 (Gingerbread). It's hardly any different from what we've been seeing in the Xperia series so far. There's plenty of eye-candy throughout the interface, and the phone keeps up with the software very well.

The default browser's page rendering speed is reasonably fast and has all the basic features covered. It supports Flash, and thanks to the powerful CPU it can handle up to 1080p web videos.

Since Google Maps doesn’t offer voice guided sat-nav, I was excited about the bundled WISEPILOT app. Sadly, it turned out to be worse than Google's offering. The app has the worst possible interface I've ever seen on a navigation software.

Sony has revamped its music player's interface, and the results are very positive. It now looks fresh and is pleasing to the eye. The handset's sound quality is great, and the bundled earphones are also very good. The manufacturer has provided a lot of equalizer settings to play with. What's more, you can also choose from various surround sound options such as the Studio, Club, and Concert Hall.

The Xperia S supports MP4, 3GP, AVI, and even MKV videos up to 1080p. The much-hyped Mobile BRAVIA Engine enhances the picture quality to some extent. Additionally, the 4.3" screen great for watching movies.

The device's camera features the Exmor R sensor. Unlike the SE Satio though, it sports an LED flash instead of a Xenon one. The camera offers various features such as the Sweep Panorama, Sweep Multi Angle, and 3D Sweep Panorama. 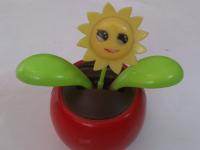 The 3D Sweep Multi Angle feature is similar to what we've seen in the Sony Cyber-shot DSC-HX9V. In this mode, you have to click the onscreen capture button, and move the camera in the direction indicated on the screen. The phone then combines these images to form a single animated image that gives it a sense of depth. It's a very good feature to have some fun.

The resulting images contain enough detail to please the casual users. However, the amount of noise produced should have been low. Additionally, Sony should have eliminated the over-saturation of colours.

In video mode, the device is capable of recording 1080p video at 30 fps. Here the image stabilisation feature comes handy. Clips are saved in MP4 format and thanks to the secondary mic, it contains stereo sound.  The videos contain a lot of detail and offer smooth playback. Click here to view the video sample.


Telephony And Messaging
The phonebook has social features, yet manages to remain neat. It can pull up contacts from multiple accounts and automatically merge duplicates. The device's signal reception was good throughout our tests and the voice quality was loud and clear.

The portrait keyboard is good to use, and a relatively big screen makes sure that you don't hit wrong keys too often. Needless to say, the keyboard in the landscape mode is even better.


Battery Life And Verdict
Like every other dual-core Android device, the Xperia S has a terrible battery life. Its 1750 mAh pack manages to keep the device up for only about 5 hours, and it gets even worse with gaming.

The handset has a great design, impressive sound quality, a 12 MP camera, and some serious raw power. On the other hand, Sony has erred by releasing this handset without the latest Android 4.0. I know that the update will be out in a couple of months, but then HTC's new phones feature ICS out of the box. Additionally, since the Android fans care more about numbers, they would want to buy the One X with a quad-core processor over this one. Having said that, I still think that the Xperia S is a worthy contender in the Android line-up.

Hi Raghav, Limited viewing angles mean that the display shifts colours if viewed from different directions. If you don't care much about the Xperia S' 12 mp camera and a relatively bigger screen, then go for the Xperia P. As of now, Sony hasn't announced the Jelly Been update for any of them.
Submitted by Chandrakant 'CK' Isi on Mon, 15/10/2012 - 18:21
News Corner
IMP IMP IMP
##