HTC Announces Its One M9 Smartphone With Refreshed Hardware | TechTree.com

HTC Announces Its One M9 Smartphone With Refreshed Hardware

It will get really hard to tell the new one from its predecessor. 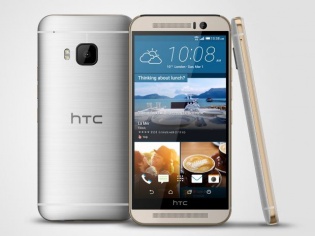 HTC has finally announced its all-new HTC One M9 flagship smartphone for the current year at the MWC 2015. The handset that sports a Qualcomm Snapdragon 810 chipset along with the all-new Sense 6.0 software that now comes with a slightly refreshed design.

HTC CEO, Peter Chou took to the stage at the Mobile World Congress at Barcelona today to unveil what was expected to be the next head-turner for the Android mobile space, but somehow it fell a bit below our expectations.

The new One M9 looks exactly like its predecessor up front, meaning that it is going to get a bit hard to convince your friends, that this is indeed the new One M9 and not its predecessor the One M8. On the top we have the usual infrared receiver with the charger and 3.5 mm jack covering the bottom of the frame. The frame gets a new colour treatment and is currently the only cosmetic differentiating factor between the One M8, along with square-shaped camera unit on the back. The rest of the smartphone including the new speakers and processor all lie hidden in a body that comes with similar design traits of its predecessor (and the One M7 to be frank). Seems like almost 60 percent of the leaks were indeed made up (or may be HTC decided to keep them for later), as there was no sign of the much-talked about One M9 Plus anywhere.

As for the specs of this beauty (it still looks good, but it is getting old) of a flagship, they are as follows:

On the software side of things, there are a couple of changes. Sense 6.0 has grown smarter, there is a revamped UI with BlinkFeed now being available on the lockscreen as well. The software feature grows smarter and is now a lot like Google Now with recommendations showing up on your screen depending on where your are and what you are searching for. There are now themes that will change the entire look of the UI. This is thanks to the new theme generator that will generate new icons, wallpapers, layouts and even your keyboard by just selecting a wallpaper of your choice.

All-in-all the HTC One M9 is more like a refined One M8, where the camera unit and the processor get an upgrade. Apart from that nothing else seems to have changed keeping aside a few design tweaks that most will skip on.

Indeed the rumours were a lot more interesting than the actual smartphone that was announced today.

The HTC One M9 is expected to launch in March and will be available in Gold, Pink, Silver and Grey.