Move over GALAXY, the One is here. Are you an Android fan who secretly admires the aesthetics of the iPhone? In that case, HTC's latest creation, the One, is capable of giving Apple's handset a run for its money. Under its shining aluminium armour, the phone packs in industry-leading specs, a much-hyped "Ultra-pixel" camera, and the Android Jelly Bean OS with a twist - its latest Sense UI. So let's find out if this qualifies to be the best Android handset around.

Design And Build Quality
In a market flooded with a horde of plasticky Android phones with uninspiring designs, the HTC One is a welcome change. The Taiwanese manufacturer has used top-notch materials to construct this phone. To be precise, there's polycarbonate chassis sandwiched between aluminium and Gorilla Glass 2. The use of metal and the whole minimalistic design approach makes it look elegant. Although the front of the device seems inspired by the BlackBerry Z10, the unique front-facing speakers make the HTC One stand out. Unlike the One X's protruding lens, their latest flagship comes with a recessed camera assembly. This was a much needed change, since I wasn't particularly impressed with the former's wobbliness, when placed on a table. 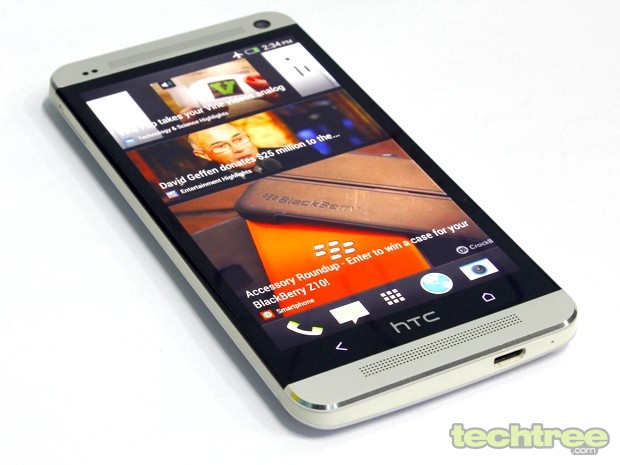 The handset is 9.3 mm thick, and tips the scale at 143 grams. It doesn't feature a user-replaceable battery or a microSD card slot. The phone sports two capacitive keys, Home and Back. Yes, HTC has done away with the multi-tasking button. The volume rocker is on the right side, whereas the micro-SIM slot is placed on left. One annoying aspect is the Lock button, which is placed at the top of the phone. This could have been fine for relatively-smaller phones with a 3.5 or 4 inches screen. But, for a handset as tall as the HTC One, it doesn't make any sense. During my week's usage, the Beats Audio branding got peeled off. I'm not saying that it's a deal breaker, but after paying more than Rs 40,000 for phone, I don't expect such thing to happen. The good news is that even when the branding's gone, the sound enhancement works just fine (Ok, that was a bad joke). 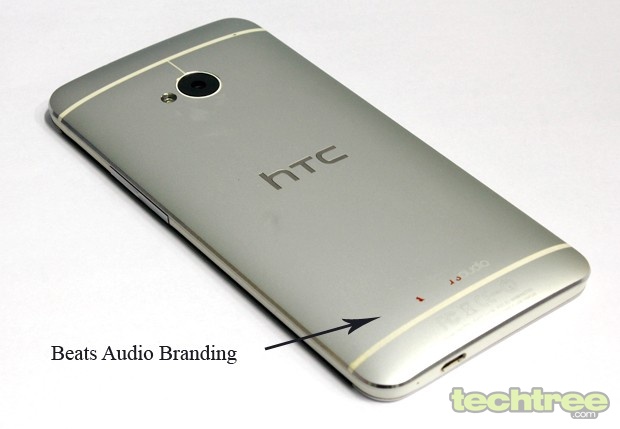 Overall though, the handset boasts of beautiful design and impressive build. It wouldn't be wrong to say that it's currently the only Android phone to match the class and finesse of the iPhone.


Display And Specs
The phone comes with a 4.7" Super LCD3 capacitive touchscreen. The display is reasonably bright and offers very good colour reproduction. The contrast is better than most of the HTC phones save for the One S. The blacks are good, but there's a room for improvement. The sunlight legibility is just about ok. With 1080x1920 pixels crammed inside, the screen looks impressively sharp. However, it's difficult to tell the difference between this and a 720p screen with naked eyes. So instead of this gimmick, I would have preferred deeper blacks.

In terms of computing power, HTC has gone all-guns-blazing. The One is powered by a quad-core Snapdragon 600 chipset clocked at 1.7 GHz, and there's 2 GB of RAM. Gaming is taken care of by the Adreno 320 GPU. Other bells and whistles include a 4 megapixel main camera with "Ultrapixel" technology, 32 GB internal storage, and 2300 mAh Li-Polymer battery. Detailed specs have been listed at the end of this article.


UI And Applications
The HTC One runs Android 4.1.2 Jelly Bean with HTC Sense 5.0 on top of it. The first thing to grab your attention is the BlinkFeed. It features a list of tiles containing information from numerous websites. Click any of these tiles, and you get redirected to the source page. Sounds like Flipboard? Well yes, it's just like that. Aesthetically, there's nothing to complain about. The app allows you to select the updates from the world of technology, sports, technology, and even your social networking accounts. However, you can't add your favourite news feed to this app. Apart from the BlinkFeed, you can add four more home screens. And of course, HTC's iconic clock also makes an appearance. 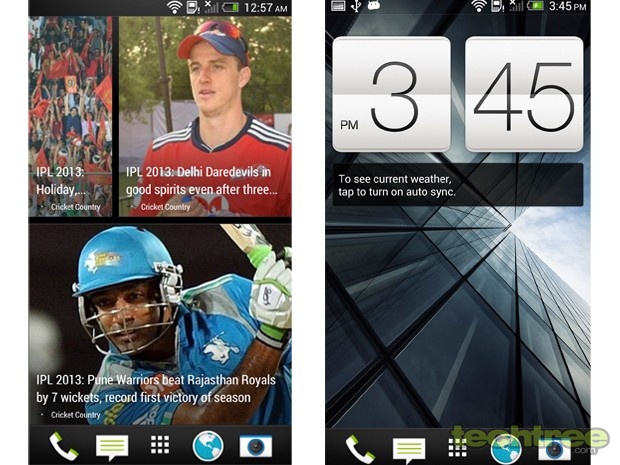 As mentioned earlier, the phone only sports two capacitive keys for Menu navigation. Don't worry about the lack of multitasking key though, as you can bring up the app switcher by double tapping the Home key. The Notification bar hasn't changed a bit from the previous iteration of the Sense UI, which means it still lacks Wi-Fi, Bluetooth, and mobile data toggles.

On the performance front, the HTC One offers a snappy user interface. The phone doesn't lag even when there are multiple apps running in the background. The browser offers swift page rendering speeds. It supports tabbed browsing and also gives you an option to enable Adobe Flash. In AnTutu benchmark, the phone scored a whopping 23,412. As you can see from the comparison chart below, only the GALAXY S4 beats it by a small margin. What's more important than these numbers is that the complex 3D games such as Frontline Commando and Dead Trigger worked without a hitch. Overall, the phone's performance is top-notch. And the interface looks a lot better than Google's stock version. 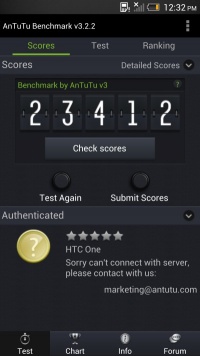 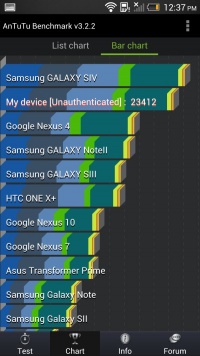 If you love bass, you're going to love the Beats Audio integration. However, this sound effect can ruin your music experience, if you're into soft rock. Thankfully, unlike the older handsets, this phone allows you to disable the sound enhancement. The phone ships with Beats branded earphones, which are sonically good. But due to the metallic earpiece, it can cause fatigue when used for a long time. The dual front-facing speakers offer quality sound, and are loud too. Another thing worth mentioning is the Music Channel feature, which offers beautiful visualisations that match the song. It also automatically hunts down the lyrics and metadata.

The phone can play 1080p MP4 video without a problem. AVI videos were bit of a hit-and-miss affair. Once you install the third-party apps such as MXPlayer, you can even watch full-HD MKV videos.

The HTC One has a built-in IR port hidden behind the Lock button. According to the manufacturer, it's compatible with TV, home theatre, and cable set-top boxes. The first problem I encountered was the lack of presets for Indian set-top boxes. None of the pre-installed settings for my Samsung TV and Sony home theatre system would work either. However, with the manual key mapping (which requires a lot of patience), it worked like a charm. Turning off TV sets in office when everyone's glued to the IPL match, just to see that look on their faces is priceless! Kudos to HTC for bringing this long-forgotten, but useful feature back in fashion.

Camera
The HTC One offers an interesting camera mode called Zoe. When activated, it captures around 20 stills and a three second MP4 video. This is pretty much like the burst shot seen on the most phones. The One offers many images post processing effects such as skin smoothening, red-eye removal, and anti-shine. Sequence Shot is an excellent feature that combines multiple images in a single frame to convey the action. Sound complex? Well, check out the following image: 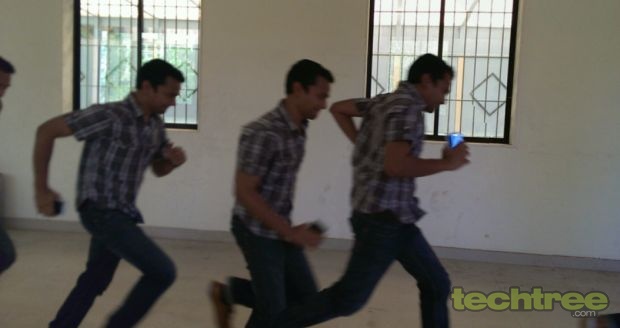 The HTC One is the first phone to come ship with HTC's UltraPixel camera tech. Instead of going for a higher megapixel count, the Taiwanese manufacturer has said to have opted for a better CMOS sensor. Ideally, this should result in better photographs, but unfortunately that's not the case. While the images are on par with any good 4 or 5 mp camera, it's not comparable to other high-end phones such as the iPhone 5. The pictures contain a decent amount of detail. However, it's the excessive noise that spoils the party. Click here, to view the untouched camera sample.

The phone is capable of recording 1080p videos at 30fps. Apart from that, you can also shoot HDR and 720p video at 60 fps. The videos are saved in MP4 format and offer jitter-free playback. After the Lumia 920, it's the second handset to use Optical Image Stabilization (OIS) for video recording, there's difference in implementation though. The Lumia 920 features a floating lens technology, in which the lens assembly moves on mechanical springs to compensate for camera shake. HTC One, on the other hand, makes use of the sensor shift stabilisation, which involves sensor movement to cancel the shakes.

Having tested both of these handsets, I can tell you that the One does quite well at video stabilisation. However, it has a long way to go before beating the Lumia 920 at it. Overall, the HTC One packs in a feature-packed camera, but sadly falters in terms of image quality. Mind you, the image quality is not bad at all, but not what you would expect from a flagship offering.

Telephony And Messaging
The handset's call quality and signal reception during the tests were good. More importantly, unlike the Sensation XE and HTC One X, this phone isn't prone to Wi-Fi death grip issue.

The revamped phonebook looks inspired by the Windows Phone platform's People Hub. You have to swipe sideways to access options like dialler, groups, and call history. On the messaging front, the onscreen keyboard is quite responsive. Moreover, the 4.7" screen makes sure that you don't hit wrong keys often.

Battery And Verdict
The smartphone's 2300 mAh Li-polymer battery easily lasts for a day to day and a half under normal usage. In our video loop test, it managed to power the device for almost 10 hours. That's almost as good as the iPhone 5's battery performance.

The HTC One is arguably the best looking Android phone in the market currently. In addition to the premium feel, the clever speaker placement is admirable. The handset delivers a sleek UI, consistent performance, sharp screen, and great sound. Considering its price tag of Rs 43,000 though, the camera could have been a lot better. That being said, it's still one of the best all round Android phone you can currently buy in India.

The battery is not "unremovable". It's just not user replaceable. I've mentioned it in the review, but I don't think it's a significant con. And 32 GB of internal storage is more than enough.
Submitted by Chandrakant 'CK' Isi on Tue, 16/04/2013 - 16:06