Quad-core phone with dual-SIM slots, expensive for the price and the inaccuracy of camera spec. 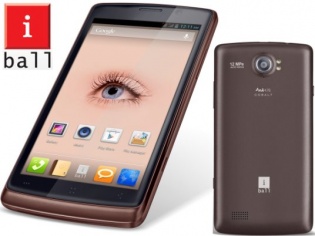 iBall has now launched yet another expensive quad-core smartphone called the Andi 4.7G Cobalt, after their previous iBall Andi 4.5d Quadro. Priced at Rs 19,995, the Cobalt runs Android 4.2, obviously has a 4.7 inch display and is driven by a 1.2 GHz quad-core Cortex A7 processor. The processor and OS version point toward this phone using the same MediaTek quad-core SoC as a number of other phones that are priced in the Rs 10k segment.

Its tech specs are as follows:

The USP could have been its claim of a 12MP Autofocus rear camera, and a 5MP front camera for video calling.

The problem is that the numbers are suspicious and a 5MP front camera makes me believe it is just interpolated/upscaled using software. When the high-end market demands and pays for a 13MP camera (not exactly 13, but a little bit over 12 megapixels), the existence of a 12MP camera in this phone is doubtful as well. Similarly configured quad-core phones from Micromax can be "patched" to "convert" their 8MP cameras into 12MP. So this claim from iBall just may turn out to be more fake than Kareena, the actor in the ad. It is worth noting that the budget phones (at 10k) based on the MediaTek MT6589 chipset have begun receiving the Android 4.2 upgrade, such as Micromax' A116. Many of those phones do feature a HD-ready screen resolution of 1280x720, offer dual-SIM slots and 3G connectivity. Clearly this iBall model has no advantage over them, yet is close to double their price. Perhaps it makes up with a design appeal to the public, which I'm somehow unable to fathom just yet, we'll find out soon enough.

If it were priced closer to Rs 10k, the iBall Andi 4.7G Cobalt would compete with the Xolo Q700 (4.5" display, 5MP primary camera, 4GB internal storage), Micromax Canvas HD A116 and Karbonn S1 Titanium. If you are looking for economical quad-core smartphones, then do check our Buyers' Guide of smartphones priced under Rs 15K.