Home » Mobiles » Micromax A116 Canvas HD Gets Update To Android 4.2

Micromax A116 Canvas HD Gets Update To Android 4.2

Said to enhance camera functionality, the update from Jelly Bean 4.1 to 4.2 may require you to visit service center. The popular Micromax A116 Canvas HD smartphone is slated to get an update to Android 4.2.1 (Jelly Bean). For now, users of the quad-core smartphone would have to head over to the nearest Micromax Service center to get their devices upgraded. An MMXNewscaster report states that the Over-The-Air (OTA) update has even started rolling out to various Indian cities.

Android 4.2 Jelly Bean upgrade means the availability of features such as Google Now, Google's Project Butter, and customizable widgets. However, the most important out of all the features that the Android 4.2 brings, is Google's Project Butter (provides for smoother performance), and the camera enhancement that the update brings along in the wake of reports of poor camera performance. After install users will observe a new notification panel design with Quick Toggles, along with a GPS fix, certain camera enhancements, and OTA support for future updates. 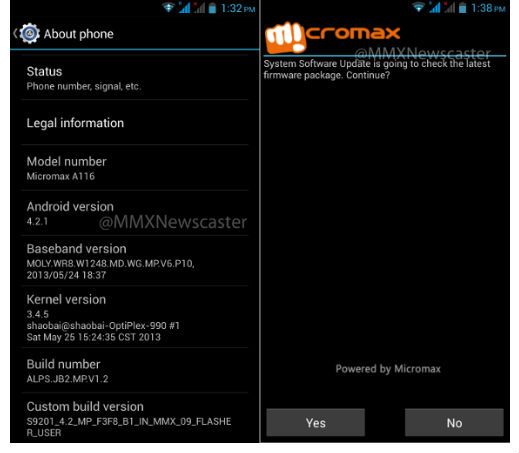