ICS handset features a 5 mp camera and 1 GHz dual-core CPU; is available in white and blue. 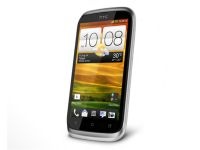 After being unveiled at IFA 2012 in Germany, HTC's Desire X has finally landed in India. The handset looks a lot like a mashup of the flagship One X and Desire C's design. Moving on to its features, the Desire X runs Android 4.0 (Ice Cream Sandwich) with company's iconic Sense 4.0a UI on top of it. The phone's 4" Super LCD display has 480x800 resolution. The gadget is powered by a 1 GHz dual-core CPU, and sports a 5 mp rear camera. Here's the list of its detailed specs:

The handset is priced at Rs 20,000, and is available through popular electronics shops across India. I wonder why HTC has gone with 768 MB of RAM, when 1 GB has become a norm at this price point. That being said, the Taiwanese manufacturer isn't known for its powerful hardware. As we all know, its expertise lies in build quality and UI. Going by its pricing, the Desire X will compete well with Sony's Xperia P. However, let's not forget that the latter has a slight upper hand due to its front-facing camera. for this price you can get the galaxy nexus. It’s a pretty sweet phone with an awesome screen and 1gb of ram. Also it’s the best implementation on android. its buttery smooth i say! :) plus, it runs jelly bean :) However on the downside you don’t get any warranty.
Submitted by MutedCleric on Tue, 16/10/2012 - 12:12

can you give me back the bright blue highlight instead of the faded boring blue one :(? please guys... Also, there are a lot of issues with the mobile version of your site. It is impossible for me to post any comments... for maybe my phone is messed up :P
Submitted by MutedCleric on Tue, 16/10/2012 - 12:14

Yes, the Galaxy Nexus, if you can lay your hands on one, and can live with the lack of warranty, is a brilliant piece of gadgetry for the price. I have a feeling the current Nexus will soon get out of stock as the new LG one comes in, though.
Submitted by Kailas Shastry on Tue, 16/10/2012 - 16:26

As already mentioned in the last paragraph, the phone does not have a front camera. This is what gives the Xperia P an edge, since Sony's offering has a front cam.
Submitted by Badri 'BADJAG' Narayan on Tue, 16/10/2012 - 17:04

You have this color since you have reached Level 6. Reach Level 7 for a different color. :) Thank you for your feedback regarding the mobile website. We will see what we can do.
Submitted by Rizwan Memon on Tue, 16/10/2012 - 17:39

Hello Atul, Can you let our readers know which phone did you purchase and from where?
Submitted by Rizwan Memon on Fri, 19/10/2012 - 09:50
News Corner