Sometimes, wit can be more interesting than fact. Making people laugh is serious business, more so in bizarre times when 'common sense' has become an oxymoron. As the country, and the world at large, comes to terms with political decisions that make little sense, a bit of tongue-in-cheek humour helps vent frustrations. And if you want to untwist some twisted assumptions, there's no better place than Twitter!

Here are some fun parody accounts of people we know (and love, or not) – they're sure to shoo away your mid-week blues!

Dr Moneymohan Singh (@DrYumYumSingh)
Let's begin with the political centre of our country – the Prime Minister, that is. Of all the parody accounts of Dr Manmohan Singh on the loose, this has to be the best of the lot. As opposed to the PMO's official account, which is drab to say the least, this handle is refreshing and witty – and also up-to-date with most scandals that revolve around the PM. Considering that this account, about a PM who hardly talks, is so bustling with activity, imagine what will happen when he does say something outrageous! Check out a few sample tweets: Sonia Gaxdhi (@SoniGaxdhi)
Where there's a Manmohan parody, there has to be a Sonia Gandhi fake account to keep the world in order. This one gives you the common man's perception of how the government really works. The Gaxdhi and Moneymohan accounts keep conversing with each other, leading me to suspect that they are managed by the same person. If you find the newspapers depressing, follow these accounts – taking their conversations with a pinch (or a spoonful) of salt of course!

sachin trendulkar (@Trendulkar)
After quickly scanning the front page of the newspaper, most Indians turn to the sports page. At least, that's all I can afford, travelling as I do in a local train! If its sports in India, it has to be cricket, and Tendulkar is cricket, generally. The dashing batsman has a low-key presence on social networks. In fact, he seldom posts anything. In stark contrast, this parody account is not just active, it's extremely interactive – and comes up with really clever one-liners every now and then.

Not Roger Federer (@PseudoFed)
Quite possibly the quietest and humblest tennis player the sport has seen, Roger Federer does have a steady and large fan following the world over. But frankly, if you were to compare him with John McEnroe and Andre Aggasi, he's plain boring. However, the Not Roger Federer account changes that perception completely. The guy is far from being humble, which makes him very likeable indeed. His tweets are fun, but they will sting the loyal-to-death FedEx fans no end! 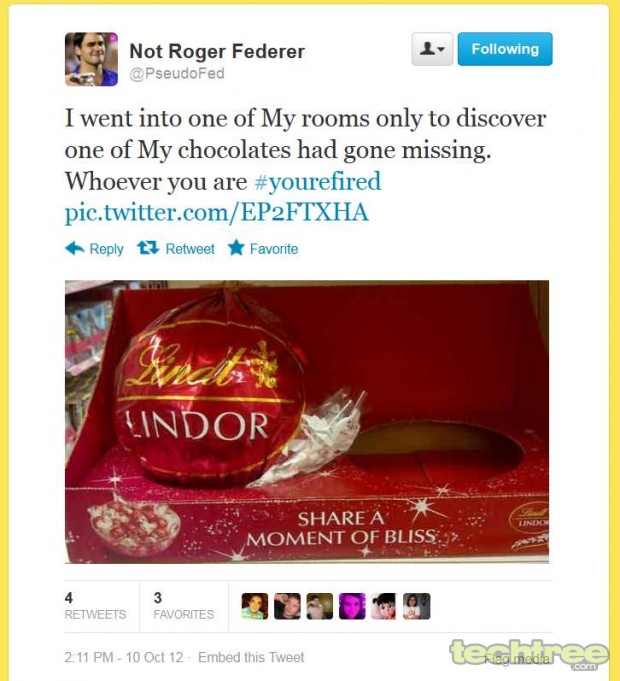 S S Sodhi (@SimpooSir)
Remember the affable character named Simpoo Sir that made the rounds on TV a few years back? This unofficial account tries to recreate some of that magic, and manages to do so with quite a bit of flair. Some of his "Peezays" may not really get you ROTFL, but they sure can make you smile. Homer J. Simpson (@HomerJSimpson)
This one is a personal favourite — I am a huge Simpsons fan! (If you're wondering why I pick Homer over Bart, well, I like Scott Adams just as much!) This is the only verified account on any of the Simpsons, and it's fun even if you don't follow the show. The tweets here refer mostly to happenings in the US, but it's nothing you don’t read about in the papers. Harry Potter (@ThatBravePotter)
One of the best Potter accounts I've come across, this won't make sense to you if you're not a Potter-lover. It references events, terms, and props that appear in the Harry Potter series, and I'lI have to say it's impressive. As a bonus, those who despise the Twilight saga will find plenty of food for thought — the page is rife with tongue-in-cheek comments pulling the rival franchise down. The Dark Lord (@Lord_Voldemort7)
Where there is a Potter there has to be a Lord Voldemort, right? Saving for the best for the last, this is one account every Potter-head should follow. Similar to the Harry Potter account, this one, too, references the series a lot. While it's hard to choose Voldemort over Potter, I pick the former in the Twitterverse, purely because of its sarcastic brilliance!

Know about some really cool Twitter parody accounts? Let us know in the comments. For a hand-picked selection of tweets, check out the gallery below.