Samsung At IFA 2012: A Complete Roundup

A look at the range of gadgets showcased by Samsung at the recent tech event. 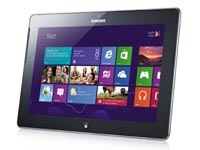 You've already checked out Sony’s products at IFA 2012, so let's take a look at what Samsung has to offer to us in the next few months.

One might say Samsung’s luck has run out ever since it lost almost over a billion dollars to Apple, and is in a danger of having eight of its devices removed from the US market, but the Samsung Mobile Unpacked event at the IFA in Berlin was still quite eventful. With a little help from Microsoft, Samsung seems to have learnt to turn life’s lemons into lemonade!

You've already read about the GALAXY Note II, GALAXY Camera and ATIV Tab, and a sneak peek into the ATIV S Windows 8 smartphone. Let's start this round-up with the ATIV S Smartphone.

ATIV S
Samsung has branded Windows 8 tablets and phones as ATIV. What is Samsung offering on the first official Windows Phone 8 phone? Well, the 1.5 GHz dual-core processor with 1GB RAM is perfect for running Windows Phone 8. It has a 4.8 inch HD Super AMOLED screen, and it comes with an 8 megapixel Auto Focus rear snapper able to shoot videos in Full HD with LED Flash and a front 1.9 megapixel VT camera. It is powered by a 2,300 mAh Li-ion battery, and will be available in 16 and 32 GB variants. Have a detailed look at the specs below:

There is no official information right now on availability and pricing. Let’s have a look the differences between the two: As the name suggests, the Smart PC Pro has higher specs — Intel Core i5 processor, 4 GB RAM, 256 GB SSD, USB 3.0 port and Full HD (1920 x 1080) resolution display. The Smart PC is slimmer, and has lower specs: Next-gen Intel Atom processor, 128 GB flash memory, a USB 2.0 port and a 1366 x 768 resolution display. What baffles us most is that despite being the higher-specced version, the Smart PC Pro has a 5 MP camera (on the rear), while the Smart PC has an 8 MP one. The front camera is the same (2MP). There's no information so far on pricing and availability. Samsung Series 7 and Series 5 AIOs
Windows 8 has given manufacturers the leeway to come up with some really nifty products. Sony has already done the Vaio Duo 11 and Vaio Tap 20. Samsung has the Samsung Series 7 and Series 5 AIOs. These make use of 10-finger multi-touch control and hand gesture commands to interact with Windows 8, which runs on 3rd-generation Intel Core processors. The RAM can be up to 8GB, depending on the customer's choice, and dedicated HD graphics is sure to bring life to its 1920 x 1080 resolution display. Users have been given the option to go up to 1TB memory space using standard HDDs, or they can opt for 64GB SSD.

There are two variants of the Series 7 AIOs — 27" and 23". Here are the individual technical specs:

The 23-inch version differs from the 27-inch one in the following, with other specs being the same: The Samsung Series 5 AIO will be available for $749 (Rs 41K), but the availability date is still unknown. The detailed specifications include: