Although bigger, the new Moto G is hardly better than its predecessor. The Moto G has been instrumental in Motorola's comeback bid. To keep its hit handset relevant in the ever changing market, Motorola gave it a bump in the specifications. The company also addressed some of the basic issues such as the lack of microSD card slot in the latest iteration of the handset. But, is it good enough to hold-up against the competition?

Design And Build
The original Moto G is known for its sturdy build. Thankfully, Motorola has retained this quality in the second iteration on the phone. The Moto G (2014) is a solid phone. Under normal use, it does not flex or creak. Having said that, the gap where the back-panel and body snaps is not uniform. Not a big deal, but it shows negligence on the manufacturer's part. Opening the back-cover gives access to two SIM slots (micro) and memory expansion. There are at least a dozen screws that stand between you and the battery compartment. So yes, the battery is not user replaceable. Handy form factor was one of the things we loved about the original Moto G. Unfortunately, with the bigger screen kicking in, compactness has gone for a toss. The Moto G is not ideal for single-handed usage. Overall, the new Moto G looks very similar to its predecessor. That's not a good thing considering that the Moto G's design was already ageing in 2013. The only significant design change here comes in the form of two metallic strips on the front that house the loudspeaker. Those strips, make the phone look like its cheaper sibling the Moto E. Check out the image below to know what I'm talking about: Motorola doesn't even bother to hide those ugly sensors on the white fascia. If you happen to watch movies on this phone in the dark, you'll realise that the phone bleeds light where the glass panel meets the body. Same issue, I have found in four units, so no, it's not a one-off incident. For more details, follow this link.

Similar to recent Nokia phones, the Moto G too comes with trashy earphones. The wall charger is also clumsy. To top it off, the retail package doesn't include a USB cable. Yes, you have to buy it separately.

Display And Key Specs
The phone sports a 5" HD IPS screen. That's a 0.5-inch bump over the predecessor. Since the resolution hasn't gone-up though, the new Moto G's pixel density is lower than that of the original Moto G. So don't be surprised, if your old Moto G's screen looks sharper than the 2014 model. The colour reproduction is very good. Its brightness levels are sufficient. Plus, the viewing angles are wide. Like very LCD screen though, it fails to render proper blacks. Motorola has used Corning’s Gorilla Glass 3 to protect the screen from scratches.

Specifications
In the specifications department, addition of the microSD card slot is worth mentioning. Camera too has gone up from 5 to 8 megapixels. Nothing has changed in terms of raw power though. The new phone is backed by the same 1.2 GHz quad-core Snapdragon 400 chip as that of the original Moto. It comes with 1 GB RAM — good enough to handle stock Android. Other features include front-facing snapper, 16 GB internal storage, Wi-Fi, Bluetooth 4.0, GPS, and 2070 mAh battery.

Software
The phone ships with stock Android 4.4.4 Kitkat. The Lollypop update has gone live in the US, so it shouldn't be too long before it rolls out in India. Frequent updates is one of the perks of owning a Motorola phone. Kitkat as we all know is much more refined than JellyBean. These small changes come in the form of transparency and better transition effects. The UX design is straightforward — you get homescreens and app menu to arrange the apps as per your convenience. 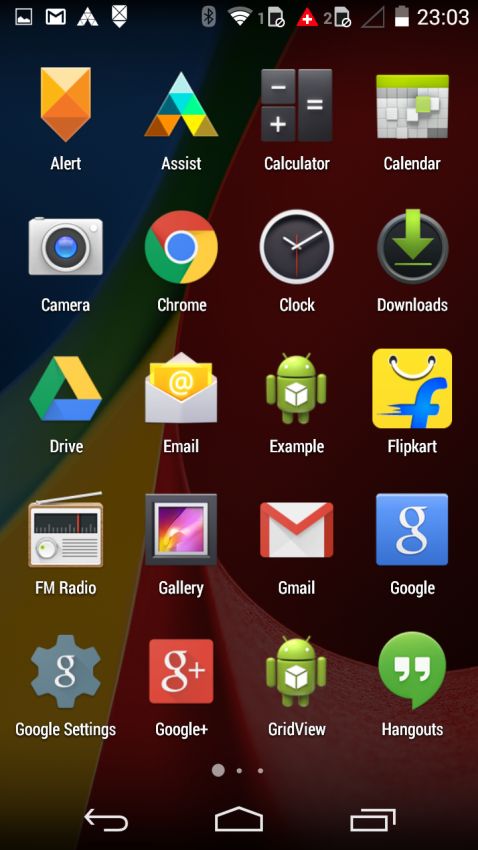 Compared to other operating systems, phone settings are easier to access on Android. With a two finger swipe from the top, you get into quick settings menu that gives access to various toggles such as Wi-Fi, Location, Bluetooth, and Aeroplane mode. Google still hasn't done anything to bring uniformity in terms of icons' shape and size. And not only third-party icons, but Google's own app icons don't follow any guidelines. 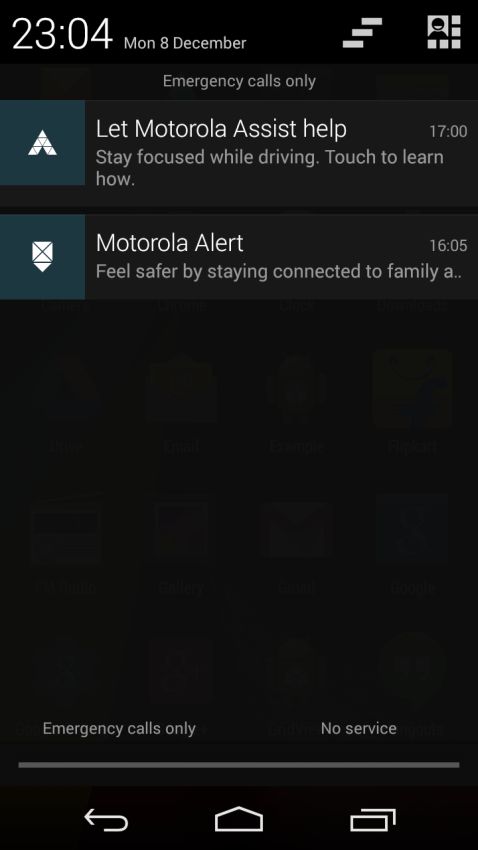 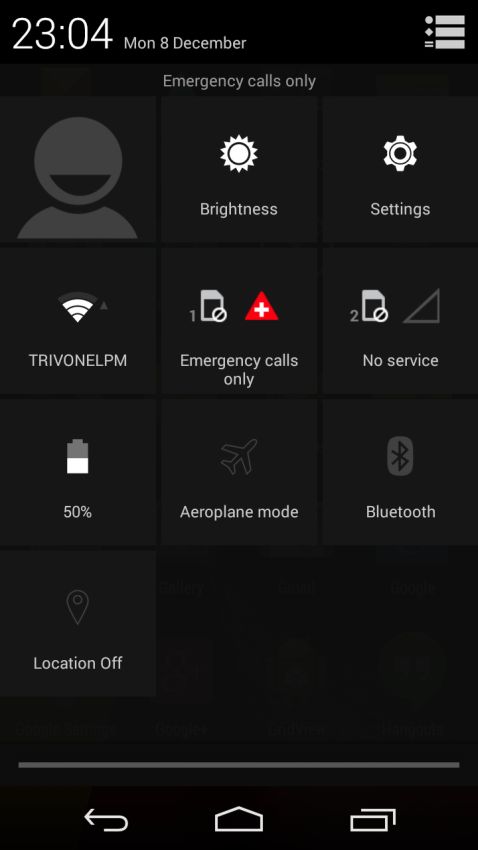 The software is free from bloatware. Little wonder then, the Moto G is quick and snappy when it comes to menu navigation. The gaming performance is exactly same as that of the original Moto G. Casual games run smooth. You can also play high-end titles such Real Racing 3 and Asphalt 8 Airborne at not-so-great, but playable frame-rate. The front-facing speakers produce loud sound, apt for gaming.

Multimedia
The default player on the Moto G is 'Google Play Music'. The software offers plenty equalisers and other audio effects. What matters more is that it produces quality sound (with after-market earphones). Moving onto video playback, the built-in player supports few formats. Not a problem though, as you can grab MXPLayer or VLC from the Play Store. 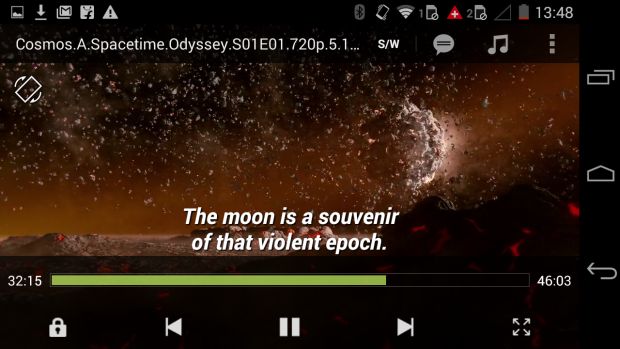 MXPlayer is a must-have app.

Camera
The new Moto G sports an 8 megapixel camera with an LED flash. In 16:9 aspect radio, it clicks at 6 megapixel quality. To fully utilise the sensor, you have to shoot in 4:3 aspect ratio. The camera interface is almost non-existing. You can access a few settings by swiping from the left side. Here you get to fiddle with flash, panorama, aspect ratio, HDR, and video. No interesting feature to talk about here.

In terms of picture quality, the Moto G is slightly better than its predecessor. This means that it sucks less. Like most Motorola handsets, the biggest downer here is the excessive visual noise. And the less said about the low-light performance the better. Video recording is capped at 720p. Many might crib about the omission of Full HD recording. However, I think that the resolution is more than enough. If anything Motorola should actually increase is the camera's sensor size. Click here to check out the camera sample.

Battery Life
The Moto G’s 2,070 mAh battery comfortably powers the device for a day and half. In our 720 video loop test, it lasted for around 6 hours. That's slightly less than the first Moto G.

Cellular
The phone's network reception is good. However, the earpiece sounds too harsh at times. If the person on the other end is loud, the sound starts cracking.

Conclusion
The Moto G offers snappy user experience. It handles high-end games at playable frame-rate. The phone impresses with its sound output too. On the other hand, it has let of of the compactness, we loved its predecessor for. Aesthetics is another critical area, as the design of the new Moto G is a step down from its predecessor. It looks more like the entry-level Moto E, which is not a good thing. After taking everything into consideration, the Asus ZenFone 5 is still the budget Android to go for. Those willing to spend a couple grand more, should consider the Lumia 730.