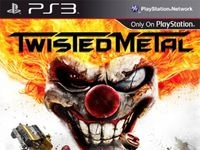 Over the last decade, there have been a number of inquests into violence in video games by well-meaning journalists who insist upon starting sentences with "A recent survey revealed", bringing to light the possible impact that killing for pleasure in games may have on impressionable teens. Of course, this hasn't deterred developers one little bit (cue: the Saint's Row series). However, the Twisted Metal franchise has traditionally taken that indifference to a whole new level. It defecates all over these do-gooders, sets them on fire, ravages them with a chainsaw, then feeds them to Mr Burns's hounds, piece by piece. In a commendable move, Sony has revived the venerable series (which saw a brief cameo on the PC with Twisted Metal 2) and handed the project to Eat Sleep Play, whose members were involved with the original title in various capacities. The developer has rebooted the franchise, bringing in a special brand of sadism to the PS3 — it's never felt so good to devolve into a crazed psychopath.

A Battlefield Full Of Bad Company
While it's unusual for arcade racers to have a discernable storyline, Twisted Metal boasts of a script that while not particularly compelling, is still convoluted and crazy enough to hold your attention. The single-player campaign tells the story of three deranged lunatics — a madcap clown, gothic biker, and mutilated supermodel — who take part in maniacal demolition derbies and races organized by a mysterious, red-eyed demon-of-sorts called Calypso. A cross between the Jigsaw Killer and Arjun Rampal, Calypso builds arenas with varying sadistic complexity, designed simply to punish participants and their vehicles to the maximum possible degree. The prize for surviving the tournament is anything the winner desires, which is decent incentive for a crazed killer. Sweet Tooth's ice cream truck transforms into a robot. Which can fly.

The campaign for each character spans several events including all-out deathmatches, races, cage matches (wherein players must remain within dynamic, designated sections of the map to avoid losing health) or Juggernaut contests (giant trucks roam the map spawning new enemies every minute until destroyed). Whatever the challenge though, your purpose is singular: Obliterate every opponent.

Career missions are interspersed with boss battles, each more overwhelming than the last. While they're certainly engrossing, I experienced major technical issues, with the camera going haywire until I killed myself, in the second boss battle. Also, I found the racing events to be too chaotic to be enjoyable, but that's a purely subjective matter. However, there was little else to complain about in the campaign, which lasted approximately four hours.

Pimp My Ride!
Obviously, there are no Ferraris or Lamborghinis to be found in Twisted Metal's vehicle roster, but there's a variety of ludicrous rides to choose from. The designs are crazy, special weapons even crazier, and each vehicle has a different characteristic in terms of speed, durability, and weapon power. From ice cream trucks that transform into robots to helicopters equipped with magnets that swoop opponents off the ground, the variety in gameplay is incredible. What's commendable is that the machines are very well-balanced. While slower, armoured automobiles such as Sweet Tooth's ice cream truck are easy to use, others like the Reaper (a motorbike equipped with a chainsaw) and Talon (the aforementioned helicopter) are delicate but capable of inflicting incredible damage. Such vehicles have a steep learning curve, but the rewards are rich. You're allowed to pick three vehicles for most events, and you can swap one for the other to gain a tactical advantage or if it takes too much damage and health pickups are unavailable. The exchange can be made at garages marked on the map. Gotham's goons have had to seek alternative employment since the Joker died.

Vehicles are equipped with primary guns and a special weapon that regenerate over time and need to be used wisely. A number of armaments ranging from remote bombs to incendiary missiles are scattered around the map, along with health pickups and turbo boosters. Primary weapons can only be fired in the direction the car is facing, while there's an automatic lock-on for missiles and powerful weapons, which can be a bit of an annoyance when there are multiple enemies around you. On the whole though, the controls are rather easy to use. Having said that, since Twisted Metal doesn't proffer instructions at the beginning of the campaign unlike most other games, I advise players to go through the dedicated tutorial before diving in.

Friends With Benefits
Since the single-player experience is rather short, Twisted Metal's main draw, as with most racing titles, is in its multiplayer action. There's cause for café gamers to rejoice, as LAN multiplayer makes a welcome appearance. Up to 16 players (either on separate consoles or groups of four players or less per PS3 using split-screen) can battle it out over a local network, although given the amount of carnage and explosions, I wouldn't recommend having more than two players per TV for displays smaller than 50". It goes without saying that online multiplayer (ranked and unranked) is part of the package. All the events within the single-player campaign are available online, in addition to team-based "faction" events. Servers in India (or reasonably close by) are easy to find and connect to, with the experience being fun and addictive. This is what happens when you cross a GI Joe action figure with a monster truck.

Dressed To Kill
The cars, characters, and environments in Twisted Metal look spectacular, with crisp textures (no jagged edges at all) and buttery smooth framerates. The maps themselves are huge and twisted, and almost entirely destructible to boot. Walls crumble left right and centre with gay abandon, revealing smaller battlegrounds packed with goodies. Each map is unique, varying from diabolical winter wonderlands with Santa statues and treacherous ice rinks, to an amusement park with constantly shifting platforms.

Another interesting design decision by Eat Sleep Play was to eschew the in-game engine for the many long and prominent cutscenes in favour of real-life actors with a generous helping of CGI, à la the Command & Conquer series. It's an interesting, almost avant-garde effect that looks slick and adds a bit of soul to the otherwise surreal storyline. While no game can ever displace Carmageddon II: Carpocalypse Now! on my list of all-time favourite gore-fests, the all-new and reworked Twisted Metal is right up there among the best arcade racers of this generation. It's addictive, insane, and a veritable bucketload of explosive fun. The psychotic cast, crazy vehicles, and downright mental arenas come together to create an adrenaline-pumping, button-mashing experience that should keep gamers busy for quite a while. Just don't take Sweet Tooth the clown too seriously, alright? View the gallery below for some more twisted screenshots.