Not your mother's vacuum cleaner. 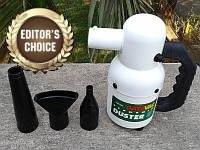 The fact that you are reading this review on this particular website means you're a gadget geek who owns electronic gizmos worth a small fortune. It also means that you care about your sizeable investment, and rue the fact that India is a very dusty and humid country. Dust, moisture, corrosion form the unholy trinity responsible for horrors such as: This milk bottle-sized blower packs in an insane 500-watt motor.

America Saves The Day, Yet Again!
While full-sized vacuum cleaners are powerful enough, they can't get the job done well because of their bulk and unwieldiness. Handheld ones are useless too — they're as effective as an asthmatic sucking through a straw. A compressed air can is your only choice then. Unfortunately, these are prohibitively expensive at Rs 225 a pop, and tend to piss off the vegans at Greenpeace as well.

The solution to this distinctively Indian problem can ironically be found on the other side of the globe with the Metropolitan Vacuum Company's (MetroVac) DataVac Electric Duster 500 (ED500). It may cost $52 (Rs 2700 approx), but you end up paying $95 (around Rs 5000) due to shipping ($22) and taxes ($20) incurred by the time it reaches your doorstep. You may think it's crazy to pay twice the price to import something, but there's a method to this madness. The scores of geeks who swear by this product notwithstanding, it takes one look at the company's About Us page to know why this product will turn out rather sublime.

No Chinese Prisoners Were Harmed While Making This Product

MetroVac is an old-school, family-owned business that's proud of what it does. While most corporations's major concern starts and ends with maximising profits, that isn't the case with this company. This is pretty evident from the fact that unlike almost every single manufacturer out there, MetroVac didn't dropkick its workforce for cheap Chinese labour. That's why the ED500 bears a prominent American flag with the words "MADE IN USA" below it.

But is a quintessential American worker lovingly lap-winding an armature any better than a Chinese prisoner forced to do the same? Apparently yes, because I've been using the ED500 almost daily for over three months without a hitch. The good people on the internet also vouch for its indestructibility after having used it for years. MetroVac itself gives a 5-year guarantee on the motor. Not that it can be claimed in India, but it's still reassuring to know that. Now that we've established it's money well spent, let's take a look at the product itself.

The ED500 pretty much resembles a slightly fat milk bottle, with a large black handle and a short spout projecting from its neck. It's quite comfortable to hold due to its reasonably light weight of 1.25 kg. The power cable is quite long and sports a tangle-free design. It appears like something straight out of a military surplus depot, thanks to its mil-spec industrial looks and a very purpose-built construction. You won't find any chrome or effeminate design cues here. What you will find, however, are rugged high-impact plastics, an all-steel body, machine screws, and heavy duty switches. Mind you, this electric duster isn't meant to look good, but to fulfil a sole objective — push ridiculous volumes of air.

The ED500 achieves this with an absolutely mental 500-Watt electric motor crammed inside a deceptively small and unassuming shell. The duster sucks in air through a removable sponge filter at the bottom. A metal mesh over the razor sharp fan blades prevents you from making mutton kheema out of your fingers. The motor then compresses and accelerates the air, which emerges like the breath of Hades from the nozzle.

Nothing I say here can prepare you for the wrist-wrenching torque that the motor exerts when switched on. I've lost count of the number of times I kept the duster on my desk with its power switch accidentally placed in the on position, then switched it on directly from the mains. That's enough to make it tumble off the table on its own accord. Thankfully, the body is strong enough to withstand multiple such impacts. How powerful is the ED500, you ask? Well, I initially considered comparing it to a compressed air can, but this is so stupendously powerful, that a comparison would be an exercise in futility. The fact is, it can shove around and even topple my vertically-mounted PS2. Lesser gadgets such as mobile phones and PMPs are blown straight off the desk without warning, so be careful where you point that thing. All this is achieved with the attachment bearing the largest opening, so you can well imagine what will happen when the nozzle is narrowed, increasing the pressure. All you need is a minute to clean an average-sized desk.

The electric duster ships with two attachments: one with a wide nozzle and another with a narrow opening. The latter concentrates the airflow enough to tackle hard-to-clean objects such as heatsinks with consummate ease. While the ED500 is small and handy enough to reach anywhere inside PC cabinets, you also get a flexible tube with a micro nozzle, and a brush attachment to dislodge dirt from nooks and crannies.

The first time you blow into the innards of your PC, I recommend moving it outdoors. That is, if you don't fancy applying a fresh coat of dust to your room. The amount of dust the machine can blow out of a cabinet just beggars belief! The best part is that while lesser blowers are known to produce ESD (ElectroStatic Discharge), I haven't faced any such problem with the ED500. This is powerful enough to lick all your components clean, while gentle enough not to blow capacitors and diodes off PCBs. In short, it's perfect.

The downside? Well, being American, it operates at 110-120 Volts AC. Plugging it directly into a 220 V Indian socket will incinerate the motor in a matter of seconds. Therefore, you will have to spend another Rs 450 or so on a voltage converter before you can power it up. It's a little gadget that plugs into your mains socket and reduces the high-voltage Indian power source (220-240 V) to the low-voltage American standard required by the ED500.

Another disadvantage is that the gizmo's almost as noisy as a full-sized vacuum cleaner. However, that's subjective, because I personally enjoy the high-pitched whine of its motor. Its batshit insane blend of power and noise means you feel more like Kratos holding the angry, severed head of Hades, instead of a regular geek with an electric blower.

Let's face it, a decent gaming rig these days can cost nearly a lakh. Paying 5% of that to ensure it works as good as new is the least you can do. It's actually cheaper in the long run as compared to compressed air canisters. It's like buying 20 of the latter at one go, but from the 21st canister on, the product starts paying for itself. If you really value your electronic possessions, this is a worthwhile purchase.

No, it shouldn't read that way. Allow moi to explain, le Badari: You see, a step-down transformer isn't a star of the next Michael Bay blockbuster. It's a little gadget that plugs into your mains socket and "steps down" the high-voltage Indian power source (220-240 V) to the low-voltage American standard (110-120 V) required by the ED500. I hope it's crystal now.
Submitted by Nachiket Mhatre on Mon, 23/04/2012 - 14:02

As has already been mentioned in the review, you will need a step-down transformer that will convert your Malaysian voltage (230-240 V) to the safe 120 V required by the device. Again, a link to a sample step-down transformer has been included in the article. Here it is for your convenience: http://www.mdrelectronics.com/productdisplay.asp?PID=4645 Note that the site above will not ship to Malaysia, so you'll have to find it in a local store or a website that has shipping to your country. IMPORTANT: The converter MUST HAVE a rating of AT LEAST 750 WATTS, or it will BURN OUT! A 1000 Watt converter will be ideal. It'll cost a little extra, but better to be safe than sorry.
Submitted by Badri 'BADJAG' Narayan on Mon, 15/10/2012 - 00:14

I've been doing a bit of research on your question, and here's what I've found: For a simple motor (which is what this duster is), you DO NOT need a step-down transformer, but a simple (and cheap) VOLTAGE CONVERTER. What's the difference between the two? In simple terms, a step-down transformer "properly" reduces the voltage to 110 V, maintaining its sinusoidal shape in the process. This makes it safe for use with ALL electronic devices within its power rating (Watts). On the other hand, a CONVERTER simply "chops off" the excess 220 V and reduces it to 110 V. The result of this is a non-sinusoidal wave (or square wave), which is just fine for simple items like heaters, irons, and motors (including electric dusters), but will DAMAGE sensitive electronic devices such as computers, DVD players, gaming consoles, etc. Here are a couple of CHEAP converters you can buy, which will WORK PERFECTLY WELL with the duster: * http://www.amazon.com/Jensen-1600-Power-Converter-JEN1600/dp/B000BB7B82 * http://www.amazon.com/Seven-Star-Voltage-Converter-1600Watts/dp/B0035H7DCI/ To sum things up, if you want a voltage reducer for use WITH ONLY THE Electric Duster 500 (and other simple ELECTRIC devices such as heaters and motors), go for the CONVERTER and save a good amount of money. However, if you're going to use other ELECTRONIC devices as well that need reduced voltage, then buy a step-down TRANSFORMER (such as the Goldsource STU0750). Hope that helps.
Submitted by Badri 'BADJAG' Narayan on Mon, 15/10/2012 - 14:00

It's understandable to be nervous. After all, the duster isn't a cheap item and you don't want it getting damaged right off the bat, especially since you won't be able to return it. So here goes again: 1. Malaysia, like India, uses the 220-240 V AC standard. 2. The Jensen power converter changes the input 220 V to 110 V, but does not maintain the sinusoidal waveform required by sensitive electronic devices. 3. Therefore, the Jensen converter IS SUITABLE for simple electric devices such as blowers and heaters. DO NOT use it with low-power devices (below 300 Watts) and with electronic devices such as DVD players, computers, laptops, gaming consoles, etc. 4. The writer who reviewed this product has been using a simple power converter (like the Jensen) with the Datavac Electric Duster successfully, once a week at least for the past few months. He has encountered NO PROBLEMS, except for a slight heating up of the converter. This is normal. 5. If you want to save an additional $5, you can go for the even cheaper Seven Star converter, which is the other link in my previous post. Quality-wise, there won't be much difference between the two. DISCLAIMER: All the above information is correct and true to the best of my knowledge. However, don't blame me if something blows up. :)
Submitted by Badri 'BADJAG' Narayan on Tue, 16/10/2012 - 16:29

If the step-down transformer works fine, you really DO NOT NEED to buy the converter. The transformer is a far superior product, since it maintains the sinusoidal waves of the current. Why then would you want to ditch that in favour of a cheap, Chinese-quality converter? If the transformer has worked fine for an hour, then it should work fine for years. Stick with what you have and save yourself some money.
Submitted by Badri 'BADJAG' Narayan on Tue, 16/10/2012 - 19:17

Hi! Did you end up buying the power converter? I am in the same spot as you were before. I would much rather buy the converter not transformer since transformer is much more expensive, would like to have some assurances first, though. Thanks for the help!
Submitted by rzzk552 on Thu, 03/01/2013 - 13:47
News Corner