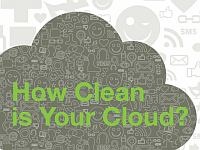 A latest report by the borderline-militant environmental group Greenpeace has accused Apple, Microsoft, and Amazon of using "dirty energy" sources to power their cloud services. What's this cloud business, you ask? Well, that's a term used by cool kids to describe any form of distributed computing, where storage or processing is offloaded onto a grid of networked servers residing in a different part of the globe, all thanks to the wonders of the internet.

Running hordes of powerful servers 24\7 can be a power-guzzling affair of major proportions for such server farms. The report's major concern is the nature of power being used to sustain these massive computing hives. Greenpeace rues the fact that Apple, Microsoft, and Amazon have been using polluting fuels such as coal, as opposed to drawing energy from renewable sources such as wind, solar, and geothermal power plants.

According to the report, only 13.5% of total energy consumed by Amazon's cloud farms is said to be obtained from clean sources. Microsoft fares marginally better with 13.9%, whereas Apple's iCloud services have been blamed for relying on "dirty energy" sources for 85% of its power requirements. The latter has been chastised for burning coal for more than half its energy needs.

Meanwhile, Apple has refuted the Greenpeace report by stating that its server farm in North Carolina fulfils 60% of its energy requirements with clean sources such as solar and fuel cells. Amazon and Microsoft, however, haven't commented on the report yet.

On the other hand, Greenpeace has praised Google and Yahoo for embracing cleaner energy sources. Facebook has earned a special mention in the report for taking "first major step in [the] direction with the construction of its latest data center in Sweden, which can be fully powered by renewable energy".

It's good to know that even if Zuckerberg happens to sell your personal information to advertisers, at least the environment won't be harmed in the process.