This not the iOS 9.1 update that we are all expecting. It has just been a week after iOS 9.0 was released, and while it does come with plenty of new features, the software also has its fair share of bugs. But this time there’s more than plenty with some iPhone users getting stuck at the update process itself with the ‘slide to update’ bug.

While Apple has confirmed that ‘slide to update’ exists, by adding a page with a solution to remedy the issue on its support site, iOS 9.0 with all its goodness still comes some pretty nasty performance related bugs. These may not be as bad as a beta version, but is not as good as smooth as iOS 8.4.

Surprisingly, just a week later Apple has already released iOS 9.0.1. Don’t get all that excited though, as this is not the iOS 9.1 update that Public Beta testers are currently running, but just a minor bug fixing update that is 35 MB in size. 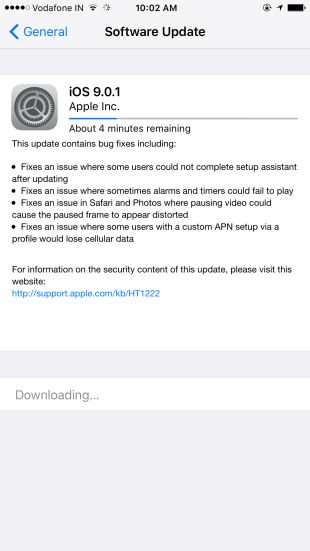 The update fixed a couple of essential things for now. These would include issues related to the users not being able to complete the set up process after installing the iOS 9.0 update. Other minor yet essential ones involve alarms not ringing as expected and some to do with custom APN networks who lost cellular data connectivity after set up.

Clearly, Apple is aware that there are issues and this is just the first of many bug fixing updates that are yet to come. But the most important problem with iOS 9.0 (now iOS 9.0.1) is performance. Users have been complaining all over the web that their iPhones (both old and new) stutter while scrolling, while others report slow camera starts that take almost 3 seconds.

Performance was supposed to be the whole point of iOS 9 after iOS 8’s problems, but sadly, none of these seem to be addressed. In fact, it’s so bad that many have switched back to iOS 8.4 via a previous backup.