The LED flash in the front lets you to click selfies even in low light conditions. 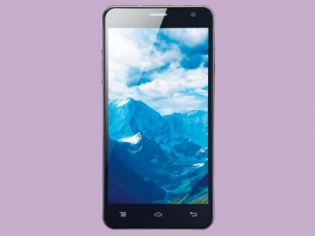 After launching its first Android One smartphone, Indian mobile maker Lava has come up with its new selfie smartphone dubbed Lava Iris X1.

With a price tag of Rs 6,777, the Lava Iris X1 is an entry-level smartphone focusing more on the selfie-obsessed young generation. Coming in three colours: Royal Black, Icy White and Purple, the Lava Iris X1 Selfie features a 5 MP front-facing camera along with an LED flash while the rear camera section equips an 8 MP sensor with an f/2.0 aperture along with an LED flash unit.

It is worth noting that the LED flash in the front enable you to click selfies even in low light conditions.

Speaking more about the smartphone's camera, it is also being said that pictures can be clicked from the front camera by making a "V" Gesture. Alternatively, the smartphone also clicks pictures whenever you say either "Capture" or "Cheese".

Apart from this, the smartphone has a 'Tap to Capture' feature which apparently allows its users to focus and click images with a single tap. Coming to the other specifications of the smartphones, it features a 4.5 inch IPS display protected by Asahi Dragontrail Glass while being powered by a MediaTek MT6580 SoC which has a 1.3 GHz quad-core processor paired with 1 GB RAM.

On the storage front, you would be getting 8 GB of internal storage which can be expanded up to 32 GB via the microSD card slot.

The smartphone runs on Android Lollipop 5.1 operating system and draws power from a 2,000 mAH battery.

Having said this, we feel the smartphone might come in sheer competition with the likes of Micromax Canvas Selfie Lens Q345 which was launched in June this year.