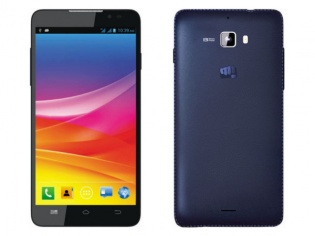 Micromax has launched it Canvas Nitro A310 budget smartphone at Rs 12,990, which will go on sale exclusively through e-commerce site Snapdeal at 2pm on September 8. The device will go head to head with the second-generation Moto G, and isn't part of the Android One program as earlier reports suggested.

The launch of the Canvas Nitro A310 comes just 3 days after Motorola unveiled the successor to its all-time best-selling smartphone, Moto G. The Micromax device features a 5-inch 720p display, and is powered by a 1.7GHz octa-core MediaTek processor coupled to 2GB of RAM.

The device also comes with only 8GB of on board storage, but users will also be able to take advantage of the microSD card slot. The Canvas Nitro trumps the Moto G in terms of imaging (at least on paper) with a 13MP rear camera and a 5MP front facing one.

The Canvas A310 will come preloaded with Android 4.4 KitKat, albeit with some amount of Micromax bloatware. Users will now be able to view notifications on the lock-screen, while there's also a Quick Look home screen feed, which is reminiscent of HTC's BlinkFeed.

In terms of connectivity, the Micromax Canvas Nitro A310 comes with standard Wi-Fi, Bluetooth and 3G capabilities. Other specifications include a 2,500mAh battery, which should be large enough for the phone to last a full day on a single charge.