Hardware Specs Of The Upcoming BlackBerry Passport Get Confirmed | TechTree.com

Hardware Specs Of The Upcoming BlackBerry Passport Get Confirmed

The Passport certainly seems armed to the teeth. 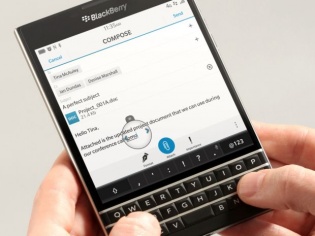 We have been tracking the BlackBerry Passport since April so when CEO John Chen, revealed the smartphone at the recent Annual general meeting, the big question was, what comes inside? Well, after a lot of speculation and some leaked details, we finally have the complete list of specifications of this abnormally square smartphone.

The BlackBerry passport comes with the following hardware specs: The monstrous handset measures 128 x 90.3 x 9.3mm and weighs a pocket-heavy 194.4 grams all of which makes sense considering that the smartphone packs in a 3,450 mAh battery.

The handset as we already know and as confirmed by BlackBerry, will also sport the all-new touch capacitive physical keyboard. The keyboard allows one to navigate the UI via swipes and will definitely be a favourite with the BlackBerry faithful who have been missing out on a trackball or trackpad for long.