Announced only for Korea, the phone brings seven-inch display with the the same specificationss as last year’s GALAXY Mega 6.3. 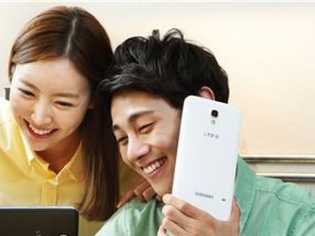 Samsung has launched what can be technically termed as its biggest smartphone, the GALAXY W. The smartphone will literally cover your face with its 7-inch phablet-sized screen and looks pretty similar to a GALAXY Tab if it were not for the slimmer bezels.

We had recently reported a device sporting a large 7-inch screen showing up at the FCC and apparently this may be the Korean version of the same device. The device comes with a “Mega-sized” 7 inch 1280 x 720 pixel display with a 2MP camera unit on the front.

On the back is an 8MP snapper with auto-focus and the all-important LED flash. Inside comes a quad-core 1.2 GHz processor coupled with 1.5 GB of RAM and 16GB of internal memory, which is expandable thanks to the presence of a microSD card slot. The smartphone (yes it’s a phone) is powered by Android version 4.3 (Jelly Bean) which is a bit strange considering that the device comes with 1.5 GB of RAM. All of the above is powered by a massive 3200mAh battery unit which should keep the tablet-like smartphone running for a day.

The device which clearly is very similar to the GALAXY Mega 6.3 (minus the 7 inch screen) will be priced at 499,400 KRW (approx. Rs 29,000) and will be available in white, black and red. We guess that the international version will be released as the successor to the GALAXY Mega 7 soon. But that again makes the whole device pointless, since the Mega 6.3 has already begun receiving its Android 4.4.2. KitKat software update.