Confirms that the case does draw power from the phone and that it supports wireless charging as well. 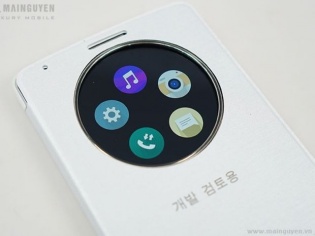 We are just a couple of hours away from the final reveal of LG’s much-awaited flagship, the LG G3. But similar to the HTC One M8, leaks have already revealed all that we need to know and more. Now, that the handset has been clearly detailed, it is time for the accessories to step in the spotlight.

Clear images of the case indicate that the case will fit on the phone and replace, the standard back cover of the handset. Moreover, the images clearly show connectors, indicating that the case indeed draws power (to power the notification light on the window) from the handset as reported earlier. Again, we are just a few hours away from the LG G3 announcement and things will surely get confirmed by then.