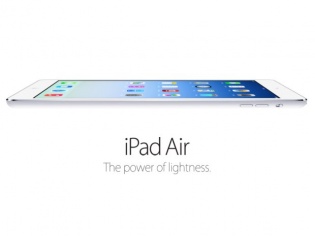 It's only a month and a half since Apple announced its new iPads, and the tablets have officially landed in India. That was quick, and is surely a sign that the Cupertino-based company taking the Indian market seriously. Apple's leaner and meaner 9.7" iPad Air's price will start at Rs 35,900. The new ipad mini which sports a 7.9" display will will set you back by Rs 28,900.

In case you missed our announcement coverage, the iPad Air sports an IPS screen with pixel dimensions of 1536x2048. Similar to the iPhone 5S, the iPad Air boasts of the A7 chipset, which is claimed to be twice as powerful compared to its predecessor, the A6. Similarly, the new iPad mini also packs in a Retina display (1536x2048 pixels). Moreover, it's also powered by spanking-new A7 chipset. It features a 5 megapixel rear snapper, while there's a 1.2 MP front-facing camera for video calls (using Skype, Fring, etc). On the software front, both the new entrants run iOS 7 out of the box.

Detailed pricing information as below...