After several leaks and speculations, will we see a WP8 handset with a super-camera? 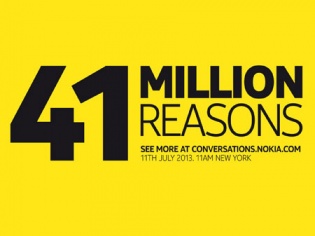 Nokia sure has something big up its sleeve, as it gears up for its much-hyped 11th July event. Promising a webcast of the event on its conversations blog, the Finnish brand has dropped clear hints that it has yet another camera phone with a 41 megapixel sensor that will be unveiled on 11th July at New York. Rumours of a Windows Phone handset dubbed as Lumia EOS has been making round for some time already, and we expect more details to come out soon.

Nokia's PureView 808 handset, which brought the mammoth-sized sensor into the limelight, runs a dated OS (Symbian) that is now dead. Ever since, Nokia fans have been pleading for the technology to be brought to the brand's WP8-based Lumia handsets, which it seems to be complying to now. Since the date is just round the corner, we'll find out the truth soon enough.