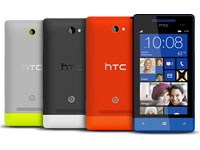 Along with unveiling the HTC Windows Phone 8X, HTC came up with the Windows Phone 8S at a scheduled media event. This smartphone has lower specs as compared to the 8X, packing in a 1 GHz Dual-core Qualcomm S4 processor with 512 MB of RAM. It has a smaller 4" WVGA resolution screen coated with Gorilla Glass. The 5 mp rear snapper with auto focus and LED flash is capable of recording videos at 720p, but it misses out on a front camera. Here is the list of technical specifications:

The 8S, like the 8X, will be available in November 2012; pricing hasn't been disclosed. Until then, feast your eyes on this video, which features both devices.