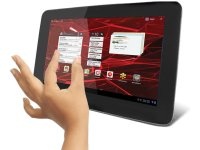 The Android 4.0 based 3D Life features a 7" multi-touch capacitive screen with pixel dimensions of 480x800. Powered by a 1.2 GHz Cortex A8 CPU, a Mali-400 GPU, and 512 MB of RAM, the tablet offers 4 GB of internal storage with a 16 GB microSD slot. Connectivity options include inbuilt Wi-Fi and 3G via an external dongle, but GPS is absent. The 3400 mAh battery claims to offer a minimum playback time of five hours for 1080p video. Other features include a 2 mp main camera, Flash 10.1 support, USB OTG port (for connecting accessories), and a 3.5 mm audio jack. The slate is 3D-capable and comes bundled with 3D glasses. However, the nature of the 3D content included with the device hasn't been specified. The 3D Life is available in black and is priced at Rs 6000. Next, the Float Tab X78 is powered by a 1.5 GHz CPU, a Mali-400 GPU, and 512 MB of RAM. Running Ice Cream Sandwich (ICS), this 7" multi-touch tablet measures 7.6" (l) x 4.8" (w) x 0.3" (8.5 mm) (d) and tips the scales at only 295 grammes, making it India's "slimmest and lightest tablet", according to the manufacturer. It also features a 2 mp front-facing camera, Wi-Fi, 3G support via an external dongle, mini-USB 2.0 port, 3000 mAh Lithium-polymer battery, and 8 GB of internal storage that can be further expanded via a 32 GB microSD slot. It also claims to supports several video and audio formats, and comes preloaded with games and utility apps, including Olive Office Premium. This tablet is priced at Rs 7000 and comes in the Champagne Gold colour. It has to be mentioned that Swipe has compared the Float Tab against the Apple iPad 2, listing one of its "disadvantages" as "No support to google market". Either it's being really cheeky, or really ignorant — you decide which. Finally, the 7" Halo Tab also runs ICS and is powered by a 1.2 GHz Cortex A8 CPU, a Mali-400 GPU, and 1 GB of RAM. It packs in 4 GB of internal storage that can be further expanded by up to 16 GB via the microSD slot. It is differentiated with the previous two products by its HDMI-Out capability and a SIM card slot, which lets you use it as a mobile phone. Other features include a 1.3 mp front and 2.0 mp main camera, Wi-Fi, 1080p video playback, Flash 10.1 support, USB OTG port, and 3.5 mm audio jack. GPS support is missing in this tablet too. The device features a 3800 mAh battery that offers a minimum running time of five hours. Available in black and white variants, the Halo Tab is priced at Rs 9000.

Hi Likhit, If you go to the gallery on the product page, you the back shots show an HDMI slot. As for the comparison, once we review the product only then we can help you better.
Submitted by Kamakshi S on Thu, 09/08/2012 - 15:57

Your understanding is correct. The SIM slot does not support 3G, but you can access 3G DATA ONLY by using a 3G dongle, which will work fine. Just check with the manufacturer to see which dongle models are supported. Alternatively, you can use now the PPP Widget app from Google Play, which supports nearly every dongle. However, it requires you to provide root access to your tablet, which may make it unstable. Go here for more details: http://www.techtree.com/content/news/1936/android-40-penta-t-pad-is709c-7-screen-snapdealcom-4000.html#comment-10326
Submitted by Badri 'BADJAG' Narayan on Wed, 19/09/2012 - 20:41

The SIM slot does not support 3G, so you need a dongle, if you plan to browse the internet using a 3G connection. You can browse the net (or make calls) using a 2G SIM card too, but that will give slower browsing speeds. In shot, you can use the internet from the tablet using either a 2G SIM or a 3G external Dongle
Submitted by Kamakshi S on Wed, 21/11/2012 - 17:06
News Corner