The hottest tablet in the market - literally! 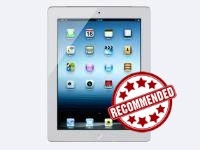 
After reviewing plethora of Android tablets, we are now evaluating a tablet from the company which started it all. Although Apple's third generation tablet isn't called the iPad 3, it's just the new iPad, and that's what matters to the fans. It promises to deliver a power-packed performance and a "sharper than ever" screen. Let's see if this gagdet is a worthy sucessor to the highly successful iPad 2.


Good Old Design And A Spectacular Display
The iPad's retail box contains the tablet, charger, USB cable, and a couple of Apple stickers. I wish at least a pair of earphones should have been bundled with the retail package. The tablet itself looks very similar to its predecessor. Despite the lack of innovation though, it is still the best-looking tablet in the market. Measuring 9.5" (l) x 7.3" (w) x 0.4" (9.4 mm) (d), the new iPad is slightly thicker than its older variant. Additionally, tipping the scales at 652 grammes, it's also on a heavier side. Overall, with a shining new scratch-resistant glass and metallic finish, it's excellent for showing off. Although the guys at Cupertino haven't done anything extraordinary on the outside, the internal components have gone through some serious upgrades. The slate is powered by a new powerful A5X chip, which packs a 1 GHz dual-core CPU and a quad-core PowerVR SGX543MP4 GPU. Other specs include 1 GB of RAM, Wi-Fi, Bluetooth, main 5 MP camera and a front VGA camera, 3.5 mm jack, and an 11560 mAh Li-Po battery. The GPS receiver is only available in Wi-Fi + 4G versions.

The gadget's 9.7" screen has pixel dimensions of 2048x1536, which delivers pixel density of 264 ppi. This is the arguably the most pixel-packed screen ever slapped on a tablet. As expected, the screen is bright and sharp. Colour reproduction is excellent; the only minor annoyance here is its reflectivity. The gadget runs the iOS 5.1, which hasn't changed drastically from the previous iteration. However, there are a few iPhone-like features, such as the pull-down notification bar, have made it to the new iPad. Additionally, there's an option to replace the usual pop-up alerts with banner-like notifications, as seen on the Windows Phone platform. Apple has also introduced a few new gestures, including swiping four fingers up to reveal task switcher, pinch to go to the home screen, and swiping sideways to switch between apps. Another thing worth mentioning here, is the optional split keyboard layout. The tablet comes with dictation support that does the typing for you. However, Siri hasn't made it on the iPad yet.

In the web department, the default browser has HTML5 support, but gives a cold shoulder to Flash. The browser is quick at rendering pages and is capable of showing websites in desktop mode. Additionally, thanks to the pixel-packed display, the text looks crisp. Although you can't enjoy 4G speeds in India yet, the device works perfectly with 3G networks.

Gaming has always been a strong point for iPads, and thanks to the A5X chip, this one is capable of delivering console-like graphics. I tried Frontline Commando, and the device rendered the third person shooter game in its full glory. However, as much as I liked the GPU capabilities of the tablet, I was put off by the device's heating issue. Playing HD games even for 15-20 minutes makes the device uncomfortably hot. I wonder how this issue went past Apple's strict quality controls. The music player interface hasn't changed a bit, and still offers plenty of eye-candy. However, the equaliser presets are placed in the device settings, instead of the music player, which is a bit silly. On the bright side, the sound quality as usual, is excellent.

The gadget can effortlessly play the MOV and MP4 up to 1080p quality. However, AVI, MKV, and WMV files are a no-go. Although the display is brilliant, it's feels odd to watch movies on a screen with aspect ratio of 4.3. The biggest annoyance here is that the iTunes dependability. It not only puts restrictions on you, but the software also refuses to sync some videos. This may have something to do with the bitrate, but iTunes doesn’t give you any indications or reasons. The iPad 2 probably had a lackluster 1 or maybe 1.3 MP camera. Thankfully, the latest iPad has received a major camera upgrade. It offers touch focus, face detection, and grid option. As seen in the WP platform's camera UI, the iPad now lets you view the last clicked picture with a simple swipe gesture.

The photos taken in broad daylight look great. Overall, I feel that the noise is on the higher side. Coming to the subject of video recording, the device is capable of 1080p video at 30 fps. The level of detail is good, and here's a sample that we've uploaded on YouTube.


Battery And Verdict
The tablet's 11560 mAh Li-Po battery can keep the device running for about a day with normal use. With 720p video on a constant loop, the new iPad's battery lasted for around 9 hours 40 minutes, which is very impressive. However, for some reason, you can't recharge the new iPad when it is in use.

Apple's latest tablet offers a brilliant screen, simple UI, excellent gaming performance, and 1080p video playback. On the flipside, it has typical Apple restrictions such as the proprietary port and iTunes dependability. The biggest downer, however, is the heating issue. Having said that, since there's nothing impressive coming out of the Android camp, the new iPad seems to have no real threat, until the Windows 8 tablets hit the market later this year.