Home » News » Apple Watch to Get Camera and Sensors?

Apple Watch to Get Camera and Sensors? | TechTree.com

Apple Watch to Get Camera and Sensors? 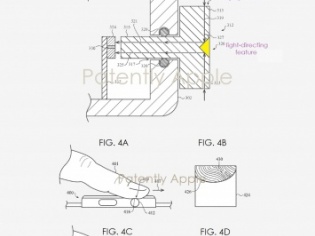 There’s something to be said about Apple and its penchant for patents. Over the years, the company has surprised many with their technology smarts that has resulted in a slew of products that are high on the UI/UX while competitors often offer the moon and end up just beyond the tree-tops.

We had reported just last week about the company’s attempts to join the foldables bandwagon and the slew of rumors already floating around in the lead-up to Apple’s 2020 launches. Looks like the company isn’t done with their vivid imaginations as they’ve now shifted focus to the next generation Apple Watch.

The caveat that all that Apple patents doesn’t turn into reality continues to hold good. Having said so, the company had first filed a patent in 2015 adding a touch sensor to the side surface of the Apple Watch’s digital crown. Which effectively means that what is available now on the crown would be going away.

The Apple Watch 4 and 5 house a sensor on the central digital crown though it doesn’t serve the purpose of a biometric authentication. And possibly that’s what Apple is hoping to achieve in its next generation of wearables. For example, a fingerprint scanner could allow easy unlock of even the iPhone connected to the Watch. Currently, Apple Watch requires passcode authentication or by unlocking the associated iPhone. Imagine unlocking one with a slight touch and the other by rotating the crown? Is it a must-have feature? Well, not exactly because the iPhone already has face authentication with fingerprints slated for a revival in the upcoming models.

The future Apple Watch may include a housing that provides a side surface, a transparent cover attached to the housing and a front surface of the electronic watch that brings forth an image-sensing element and a crown extending from the side of the housing to define an imaging surface. In addition, there could be a light-directing feature that is configured to direct light on to an image sensing element such as a finger.

Another interesting piece of patent data was published in the report by Patently Apple that suggests a possibility of the camera coming on board the Apple Watch. What could be the purpose? Definitely not to click selfies or take pictures. It could be the solution to a two-step authentication of Apple devices connected to each other. Maybe, the passcode is also set to disappear soon.

There is also another patent with the US Patents and Trademark Office that shows a modular Apple Watch with interchangeable sensors. The patent claims that users could swap modules in order to customize their watch based on personal needs. Could be Apple’s way of getting back at its rival Google which sought to acquire healthcare wearables company FitBit last year.

Must say that a camera and a sensor on the watch isn’t really going to be a game changer in the future though it ties up with Apple’s new-found narrative around data privacy and security as it would strengthen the tie between its devices, perhaps requiring one to open the other.