Home » News » Is Mark Zuckerberg Preparing for US Presidency?

Is Mark Zuckerberg Preparing for US Presidency? 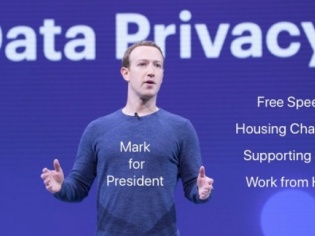 First things first! Facebook’s billionaire CEO Mark Zuckerberg deserves a word of praise for removing his head honcho hat and putting on that of a public figure while discussing of long-term issues and not just about quarterly investor meetings and profitability numbers. That he did so is in itself a sign that his networking platform has an important social role too.

So, how does he see the technology firmament taking shape over the next ten years? In the post Zuckerberg made on Facebook, Zuckerberg has made a few predictions:

After reading these predictions, if you didn’t say ‘meh’, well you are just being charitable or aren’t remotely interested in the business of technology and computing. Because, Zuckerberg hasn’t told us anything new save the fact that his precious company is working on building more private groups, Oculus and AR glasses to overcome the three “challenges”.

Now let’s come to the operative portions of his post. He starts off with an admission that Facebook hasn’t “brought about the generational change in addressing issues as hoped” and suggests that institutions aren’t doing enough to address concerns of the youth such as climate change and costs of education, healthcare and housing.

Bang on! What Zuckerberg appears to ignore here is his own role in promoting political ambiguity on the platform that allows rogue actors to conveniently distribute misinformation while he shrugs his shoulders and uses the right to free speech as the peg on which he can conveniently hang the blame for his inaction. Will he take personal responsibility for ensuring that his own platform would provide the opportunity to create this social change?

Carrying on, the Facebook boss says millennials would be leading the institutions in the next decade which would provide the shift in policies that structural reforms across the US and the rest of the world badly needs. He claims the Chan Zuckerberg Initiative would be “funding the younger entrepreneurs, scientists and leaders to enable these changes.”

This is where Zuckerberg hits the mark (pun intended) as a politician. Does he plan to fund the next Democrat nominee? Of course not, given that they’ve been vocal in criticizing Facebook and its ilk over the political ads imbroglio. So what if Bernie Sanders and Elizabeth Warren are two senators having the maximum connect with young voters. And, both have been disdainful of Facebook’s efforts to curtail fake news and misinformation.

In another section, Zuckerberg harps on ways that Facebook can decentralize opportunity for small enterprises over the next decade by “building the commerce and payments tools so that every small business has easy access to the same technology that previously only big companies have had.”

This appears to be another political masterstroke where he is merely requesting Amazon to part with a small chunk of their e-commerce pie! There’s already talk of Facebook Pay becoming centrepiece of the company’s bid to enter the lucrative and highly competitive digital marketplace. That too without claiming any technological high ground but continuing its model of owning the users and selling them to brands for targeted advertising.

However, the pièce de résistance of the post is what he says about platforms holding massive amounts of data. “Platforms like Facebook have to make trade-offs on social values we all hold dear -- like between free expression and safety, or between privacy and law enforcement, or between creating open systems and locking down data and access,” he says in rather grandly and remind us that “One way to deal with this, is through regulation, especially on issues with elections, harmful content, privacy and data portability.”

Immediately thereafter he adds: “Another and perhaps even better way to address this is by establishing new ways for communities to govern themselves” which includes an oversight board to hear appeals against decisions made by platforms such as Facebook. Wow! Mark that was the fastest ever U-turn we’ve seen anyone take. You’d make any F-1 driver proud.

While Zuckerberg is comfortable talking law where it suits him, he is making it clear that law has no business butting into his business model in the form of governmental regulation. As for the independent oversight, it is like asking the undertrials and prisoners to run the prison and is hardly worth considering.

So, what exactly is Mark Zuckerberg suggesting in his note? In case you can figure it out, please let us know, for with this post, we believe it is time that he demits office at Facebook and runs for the Senate or Congress so that he can eventually enter the White House. Besides the platform, he seems to have all other qualities that Donald Trump would be proud of.