Foldables Were Big in 2019: They Just Got Bigger | TechTree.com

Foldables Were Big in 2019: They Just Got Bigger Foldable technology has been at the fringes for quite some time though none of the hardware companies seemed to be getting the technology to ensure that the pixels around the folds remained intact for longer periods of time. Then came the Samsung Galaxy Foldable and the Moto Razr in 2019 to set speculation at rest about the folding technology.

With the fear of the pixels playing hooky getting reduced, both Dell and Lenovo have landed their foldables tablets at the CES 2020 with Intel joining the fun by showing off a prototype that has been christened the Horseshoe Bend – whatever the heck that means! Of course, some of us may recall the company’s earlier attempts with Tiger Rapids and Twin Rivers.

The fact though remains that the foldables just grew larger as all the gadget makers came to town with larger bendable screens though Intel took the prize for getting us a 17-inch screen, the biggest yet. Of course, the company isn’t planning to launch it commercially and made it clear that it was part of the same series of experiments that it started with the two imaginatively named prototypes of twin-screen laptops and notebooks. 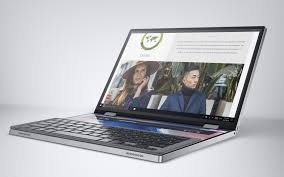 Writing for Engadget.com, Cherlynn Low says the biggest challenge of the Horseshoe Bend was working out how to make a folding screen of this size without breaking, as well as how to get a powerful processor inside with an adequate battery to keep it running all day. “The prototype uses an Intel Tiger Lake UP4 processor to power the 17.3-inch screen though Intel did not share how long it was rated to last,” she says.

Another one on the foldable tablets list is the Lenovo ThinkPad XI Fold which was first announced close to a year ago and which debuted at the CES 2020. The screen is 13.3-inch and smaller than Intel’s product and bends inwards and the two halves of the display fold onto teach other that snaps shut magnetically.

Meanwhile, Dell has showcased two prototypes called the Concept Ori and the Concept Duet, the latter appearing to be a take on Microsoft’s dual-screen Surface Neo with two 13.3-inch screens connected by a hinge.

Looks like the world is folding up, at least when it comes to screens that we as users have gotten addicted to.