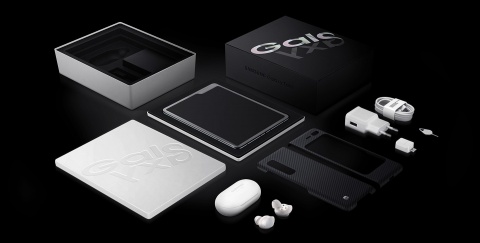 First things first! The smartphone that came into our hands flew in directly from the United States, carried over by a friend who has sworn by the Galaxy ever since Samsung launched the iconic series launched nine years ago. That the owner agreed to part with his phone for a few hours, came about due to my convincing skills and a solemn promise that one won’t write “bad things” about his beloved!

Having set the tone for things to follow, let me first state what is obvious. The world’s first foldable phone is a beauty to behold, though some may say that in its folded state, the Galaxy Fold could remind some of us of the brick-sized monstrosities that passed off as mobile phones in the late 1990s. For the new millennials, suffice to say that the phone looks chunky when wound up.

However, once the initial feeling of holding the world’s most expensive smartphone (it costs a cool 1.65 Lacs) in hand evaporates, what bursts forth is a feeling of awe as a 4.6-inch handset suddenly expands into a 7.3-inch tablet. And when the app (in this case Google maps) suddenly pops into a larger avatar, the wow feeling is involuntary.

Of course, there is also a nagging doubt lurking somewhere in the background, given that Samsung had to withdraw the Galaxy Fold after reports of screen disfiguration upon its aborted pre-launch some months ago. And when the owner states unequivocally that he’s been advised to use the lightest of touches to operate the smartphone, the doubt turns into trepidation. But, what the heck? It isn’t that I am going to cough up 165K. It belongs to someone who can easily afford a few broken screens.

There is another wow waiting to happen when one actually unfolds the phone. The motion is smooth, thanks to the 20-part, dual-axis hinge. The Galaxy Fold opens just like a book without any of the legacy issue that one faced with tablets that turned into laptops and vice-versa. I swear I heard the iconic title track of James Bond playing when I literally flipped open the phone!

Use of plastic around the main display was underwhelming but for those of us who’ve stuck with the Galaxy styling, this was something one did anticipate. Of course, the world may have moved to gorilla glass but Samsung managed to fortify the entire panel with a metal layer beneath the screen, which means it is okay to have plastic on the outside.

Now comes the bizarre part. When folded, the phone stands tall and narrow and chunky at more than half-an-inch in thickness – almost double the Galaxy S10! Which makes it tough to slide it into trouser pockets, especially for those of us who prefer slim-fits. Having said so, it’s easy to slip into a blazer pocket or a lady’s handbag.

From user experience perspective, the first thing that struck me was the button layout where Galaxy has separate buttons for powering the device and opening it with a fingerprint reader. Would it have made sense to combine them? Maybe yes, as it would have allowed for an easier single-motion gesture to switch on the device and unlock it for use. In this case, the fingerprint reader doubles up as a button that allows one to open other apps. By the way, there’s also facial recognition, but one won’t dwell on it, given the challenges Samsung Galaxy S10 and Google Pixel 4 have been facing.

An obvious Apple effect that was visible to an iPhone user like yours truly was the missing headphone jack from the phone. Bummer? Heck no! Because Samsung’s smart looking Galaxy Buds is part of the deal. So, there’s no need to fry your brains over how to charge and listen to music at the same time.

If there was one thing the phone’s owner was peeved about, it was the lack of color options as Samsung only gave us two – Space Silver and Cosmos Black. Whatever happened to that iconic Astro Blue or the bright and chirpy Martian Green that were part of the company’s earlier launches?

Right upfront I had mentioned that the foldability of the Galaxy Fold was truly smooth. This has been achieved by a combination of smart designing and enhanced technology. Having played around with the foldability for over an hour, this is what I realized:

The Galaxy Fold has two screens, but only just so. The front display doesn’t offer users anything more than a glimpse that aids quick interactions. In an era where 5-plus is the normal, a smaller screen doesn’t seem kosher and being narrow, interaction doesn’t happen easily. My guess is that users would limit the front screen to check mail, but not read them, see a message arrive or just look at the weather summary icon. 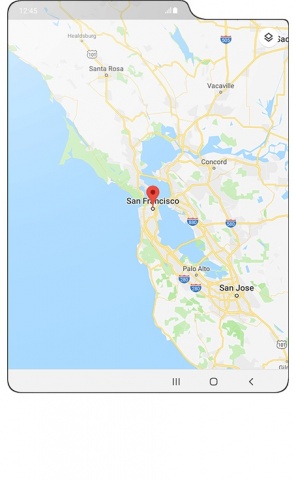 Once you flip to the larger screen, the real action begins as the AMOLED canvas is all that one needs to do one’s thing – be it responding to emails, watching a movie or even editing a document. There is a tablet feel to anything that one does on the Galaxy Fold and this is where the gadget goes beyond the currently available best-in-class smartphones. Though I didn’t get to watch a full movie on the device, whatever time I managed to spend on it gave me a tablet feel with super acoustics.

There is one minor distraction though – the crease where the Galaxy folds is quite evident though it doesn’t exactly distract from one’s viewing pleasure. However, it does throw up a white background with some of the apps one used such as Gmail. Also, while moving across the screen, the crease can be felt, even if one is using super-soft touch.

There’s some super smart stuff that the Galaxy Fold does such as the manner in which it ensures that the app one opens on the front display simply expands while switching to the larger screen. For e.g. Google Maps on the front screen would fill out the bigger screen when one opens the phone as do all the apps that one got time to experiment with. I did come across a minor challenge that when one shut the phone, the same app didn’t run again on the small screen. The owner of the phone had found the solution to this though – merely go to settings and tweak the display settings!

Another swell feature is the phone’s ability to run multiple active windows that allows up to three apps at the same time on the larger screen. All one needs to do is to swipe from the right to open that extra couple of apps, which can also be resized and moved around on the screen. Quite a cool feature for those who love to multi-task – even on the phone.

The keyboard also is tuned to the big screen with thumb typing available to enhance the pace of typing, which by the way can be achieved by simply swiping the keyboard as well. The feature seems quite useful if one is editing a document or writing a long-winding email. Of course, the regular layout is as good as any on competing phones.

When my friend handed over the phone, he was gushing about the fact that the Galaxy Fold had six cameras. I wondered why but upon fiddling around with them, realized that they’re quite a handful and worked quite well in multi-mode photography and as a video camera. For the record, the Galaxy Fold has three cameras on the back – a 12-MPl wide-angle, a 16-MP ultra-wide and a 12-MP telephoto. There’s a 10-MP selfie shooter when folded with a 10-MP main camera and an 8-MP depth one when the phone is opened up. An embarrassment in camera riches!

This is where once again I got the James Bond feeling. In the folded state, the device can click pictures surreptitiously as all one needs to do is double press the power button. Of course, one cannot really frame great pictures on a 4.6-inch screen but who cares as one can catch friends and colleagues unawares with some spy shots!

Once unfolded, I did require two hands to take some pictures, which were lively with saturated color and stunning detail. The wide-angle lens is capable of capturing details and one could easily read shop window signs upon zooming in. All in all, the cameras did excellent work though when it came to portraits, I found my old iPhone XS performing equally well.

The Snapdragon 855 processor really does zip up things in terms of performance and with 12 GM of RAM included under the hood, the multiple apps appear to function without any noticeable lag in the couple of hours that one had to play around with the phone. The phone comes with a 4,380 mAh battery which the owner says lasts long enough for him to work through the day and watch a movie while traveling back home in New York.

The Galaxy Foldable appears to be a phone for the future though there are enough glitches around that makes the gadget feels a bit under-cooked. The design is bulky and the feel is heavy with a front display that is too small to be of any real consequence. However, even with all these faults, one must doff one’s hat to Samsung for launching a new generation of foldables.

Reiterating the caveat that one got to use the smartphone for just about half a day, the thought that popped up when the phone went back to the owner was this: Hey! This is just the right kind of chap who should be owning the Galaxy Fold. Those who can afford the hefty price tag and more importantly a smaller percentage among them who are ready to risk impending disaster around the corner.

As for the rest of us, it would be prudent to stay with the conventional smartphones because the foldable ones are still learning how to fold!