A Week-Long Review Of Apple’s iOS 9

It’s worth a download, but older devices (and even some new ones) are better off with Apple's upcoming iOS 9.1. I will be frank. I have owned an iPhone 6 Plus only since January this year.

But the best iOS version I have used on this device has got to be iOS 8 and in all probability, it may have been the best one ever.

But with every new update comes new features and bug fixes. Apple iOS 8 bought some new features, but none of them where as extensive as the ones on iOS 9.

So without further ado here’s what I have noticed after a week of usage.

It is a much debated topic online, but many will tell you that iOS 8.4.1 did a better job at it. This is disappointing especially when there were plenty of news and rumours that iOS 9 would focus more on performance and less on features. Turns out the exact opposite happened.

While my iPhone 6 Plus hummed along well with no problems whatsoever on iOS 8.4.1, I noticed a lot of problems after switching over to the iOS 9 public betas. But back then I was not worried because I expected Apple to fix all of that in the final release. More importantly the app crashes (especially the ones that connected to external hardware) were forgiveable as those apps were not iOS 9 ready back then.

But after using the Apple iOS 9 for a week (actually just on first boot) I discovered that performance was clearly reserved for a later update (iOS 9.1 arrives in November). So I gathered my guts to prepare for a proper restore to my previous backup iOS 8.4.1. But somehow even with the unstable performance I still have not rolled back. Battery life is a bit lacking, but my iPhone 6 Plus with is 2915 mAh battery still delivers a whole day of usage (12 hours), that includes gaming (Real Racing 3, Infinity Blade etc), making calls, WhatsApp etc. Low Power Mode helps and its not like you are missing out on much by turning it on either (iOS multi-tasking is not as competent as Android multi-tasking anyways).

A week later I found myself using one feature more frequently, Spotlight Search. If you are not aware, the improved search can even search through your apps. Like Searching for a restaurant in Zomato via the universal spotlight search. It is clearly the highlight in iOS 9.0. While Siri has gotten smarter, I still rarely used it. It often has a hard time hooking on to a fast 3G network while travelling so it can barely accomplish or complete a request when you are on the move, which is when you really need it. 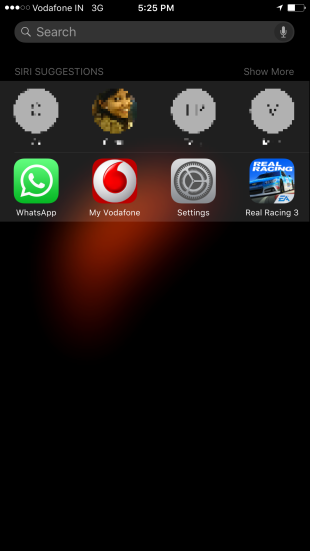 Maps is practically useless as it always was, with no support for navigation. Then there is the News app is clearly not arriving any time soon in India. Both of these apps were the essential elements for Siri’s proactive suggestions to work. So instead of getting points of interest, news and advanced in-app searches, Indian iOS 9 users just have suggested contacts and apps (boring!). It wont even show app suggestions to users in India like it does elsewhere.

Coming to that swank in-app Spotlight Search, it is not as you would like it to be and here’s why.

Spotlight Search will only let you search through recent Spotlight search queries within apps (like inside Zomato or Imdb). The feature does not go on a fresh new search every time you type a query (you can expect your data bills to shoot through the roof with that) instead it will show you a query you have searched in the past or content within the app that you have accessed recently. Before and after Spotlight Search results.

So in short it is impressive, but it still needs a lot of work to make it as awesome as we expected it to be. On a positive note, many apps on the App Store that use Spotlight Search have added support for in-app searches from the home screen. So this a joint effort coming from Apple and its active developer community. Notice the tiny "Back to Mail" button on top (Right Image).

“Back To” that appears instead of the mobile network indicator when you move from one app to another is another great highlight of iOS 9. If you open an email and click on a link that opens Safari to the web page, you will now see a small text with the words “Back to Mail (previous app)”.

Tapping on it will take you back to the previous app, the one that you came from, with no need to double press the home button to access the same. Productivity indeed gets a boost with this tiny little modification. 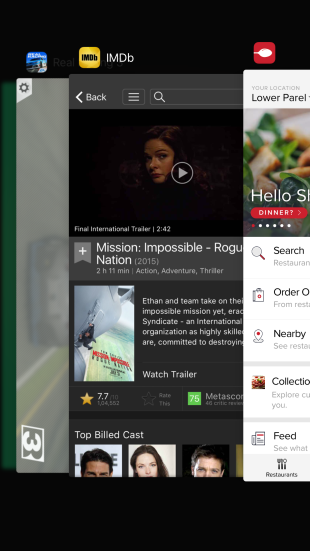 The new tabbed app switcher is great and allows you to view more content at a glance compared to the old card-based one. In fact I found myself glancing at tabs instead of jumping between them, meaning that the new tabbed layout is a hit. One thing that I did notice was a stutter while scrolling through them. This is something that will hopefully disappear in coming updates.

Should you upgrade to iOS 9?

Well, the answer is Yes. If your phone supports the new features, then go for it. There will be a bit of lag initially and performance is clearly not as expected. But we saw the same happen with iOS 8 and iOS 8.4.1 in its last iteration was splendid.

Also I still have iOS 9.0.1 running on my iPhone 6 Plus. More importantly, iOS 9.0.1 will save you from a couple of vulnerabilities as well so you can be sure that at least your phone is secure.

If you own an iPhone 4s, iPhone 5, and the iPhone 5c it would not be advisable, until the OS gets a few more updates that focus on performance. Coming to the iPhone 5s and the iPhone 6 will not see much of difference in performance since the display resolutions are still lower, while you have 1 GB of RAM that plays well with iOS 9.

As for the iPhone 6 Plus, you should switch to iOS 9.0 only if really need to have the flashy Spotlight Search or if you love the new font so much. That 1 GB of RAM clearly shows off the damage that iOS 9.0 and its feature-heavy system has brought about. Else I would recommend holding on for a few months till iOS 9.1 arrives that should fix those performance issues (lag, stuttering, broken transitions) that everyone is complaining about.

If you have already updated to iOS 9 and are facing slowdowns, you could click on the link below for a few tips about speeding things up.

[Related: How To Speed Up Your Apple iPhone on iOS 9]