Home » Mobiles » Apple iPhone 6 Plus Review: The Most Awkward iPhone So Far

Apple iPhone 6 Plus Review: The Most Awkward iPhone So Far | TechTree.com

Apple iPhone 6 Plus Review: The Most Awkward iPhone So Far 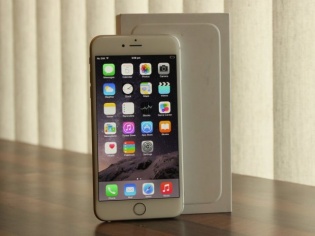 
Steve Jobs used to ridicule large Android devices by saying that "you can't get your hand around it". He even went on to call these large phones "Hummers" (car) of the mobile world. Four years on, and I still think he was right. Unfortunately though, the company he brought on top of the world, has drifted away from Job's ideology. Samsung's successful run with awkwardly big phones is one of the reasons behind that. While the Korean brand first copied the iPhone to build its first GALAXY handset, this time around, Apple is following Samsung's lead in the "phablet" market.

Design And Build
Second year in a rown, Apple rolled out two iPhones in the market. Unlike the last year though, you now get to choose between two sizes instead of materials. The recently reviewed iPhone 6 sports a 4.7-inch screen while the 6 Plus has a 5.5-inch display. Exactly like the smaller variant, the iPhone 6 Plus has a metallic unibody with rounded corners and a slightly curved display glass. The device is available in Space Gray, Silver, and Gold. The Gray one looks good, while Gold version evokes polarised opinions. The Silver iPhone 6 Plus look cheap (like a Samsung phone) due to its white front-panel with visible sensors. Because of the large size, the 6 Plus also loses out on the distinct iPhone look. While commuting in a local train a few people asked me this: "Yeh GELEXY Note 4 hai kya?". Needless to say, such questions can devastate any iPhone user. 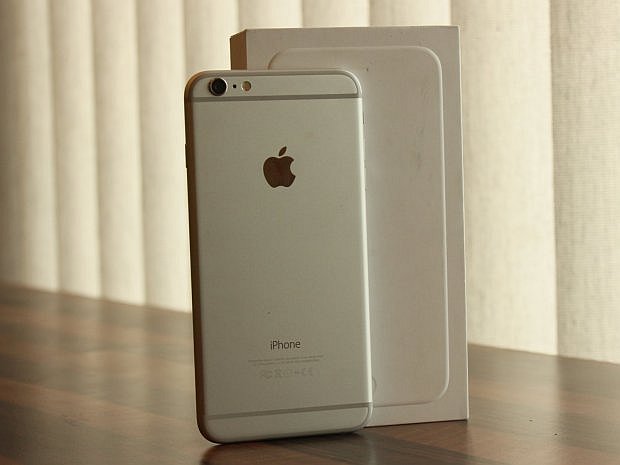 Apart from making it look mass-market, the size also takes a toll on the usability. You simply cannot use the iPhone 6 Plus with one hand. Moreover, slipping it in your Jeans pocket make you feel uncomfortable. Maybe, it's meant to be carried in a purse or bag. It's impressive how Apple has managed to squeeze the high-end hardware in a 7 mm body. Considering its size though, the phone is too thin for its own good. People are reporting bent iPhones, and the number is definitely bigger than nine. Thankfully, my iPhone 6 Plus hasn't bent in the week's usage. But, that's probably because I'm taking every possible precaution to keep it in right shape. The materials used in construction are top-notch. So probably the hollow spaces meant to accommodate the volume buttons could have weakened the frame. In the International media, someone from TheVerge has written a piece explaining why you shouldn't lose sleep over the bent iPhone. Maybe that's fine for Americans, but for us Indians it's a big deal!

As you would expect from the world's biggest tech company, the attention to detail is excellent. No matter how closely you inspect the iPhone 6 Plus, you won't find a rough spot. This is something you don't get to see in the "phablets" from the Android camp. What I did not like here are the plastic stripes on the back of the device. Like its sibling, the iPhone 6 Plus has a camera protrusion on its back. So if you don't want the lens to get scratched, better invest in a bumper case. 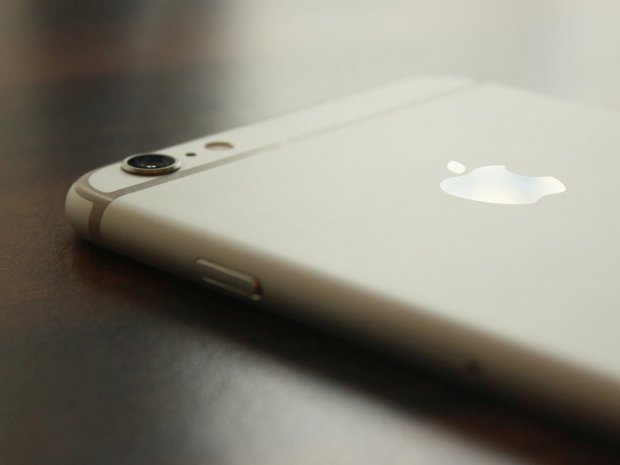 The iconic Home button features a fingerprint scanner. A 3.5 mm jack, lightning port, and speaker grille are placed at the bottom side of the device. The lock button sits besides the Nano-SIM notch on the right hand side. On the opposite side, you get volume buttons and a silent switch.

Display
The 6 Plus is the first iPhone to sport a Full HD screen. The 5.5-inch IPS screen packs-in 1080x1920 pixels, which takes the ppi count to 400. For a user, this means that the screen is sharper than you could have asked for. Android fans, please hold your Quad HD screen horses, as it doesn't make any sense on a mobile screen. The iPhone 6 Plus' display is very bright. For an LCD screen, the colour reproduction is excellent. The viewing angles are wide too. In retaining colours at extreme angles, the iPhone 6 Plus is better than most Nokia handsets with LCD screens.

The iPhone 6 Plus' screen is protected by a shatter proof Ionised glass. Apple has added oleophobic coating to it, which means it is less likely to attract fingerprint smudges.

Key Specifications
To handle Full HD resolution, the iPhone 6 Plus is equipped with a new 1.4 GHz dual-core A8 64-bit chipset along with the M8 motion coprocessor. For gaming, you get the quad-core PowerVR GX6450 GPU. Both the iPhone 6 and 6 Plus sport n 8 megapixel camera. However, the latter comes with Optical Image Stabilisation (first seen on the Lumia 920). Other specs include 1 GB RAM, 16/64/128 GB internal storage, Wi-Fi, NFC (for payments only), A-GPS, lightning port, barometer (to measure elevation), 1.2 megapixel front-facing snapper, and 2950 mAh battery. Like every other iPhone so far, the iPhone 6 Plus lacks the microSD card slot and FM-radio.

Software
Exactly like the iPhone 6, the 6 Plus comes with iOS 8. Apple's latest operating system features flat design. Compared to the iOS 7, the new software features streamlined and feature-packed notification centre. For instance, you can reply a messages right from the pop-up notifications. The control center has also undergone a slight redesign. 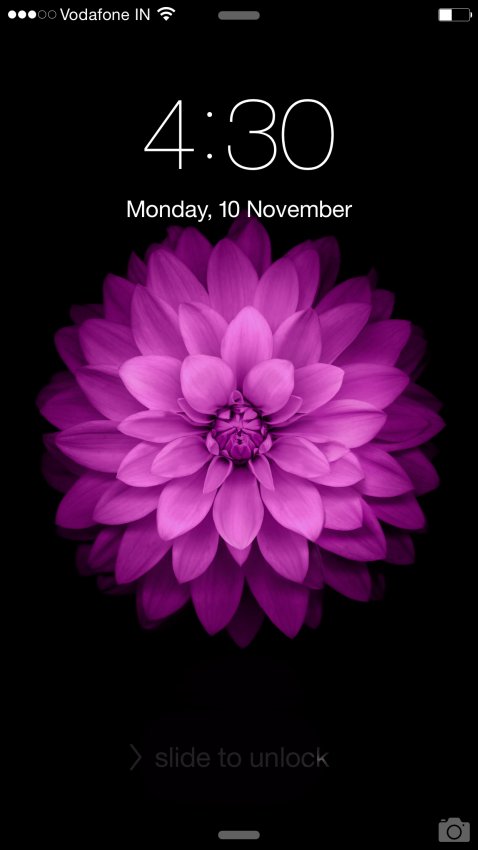 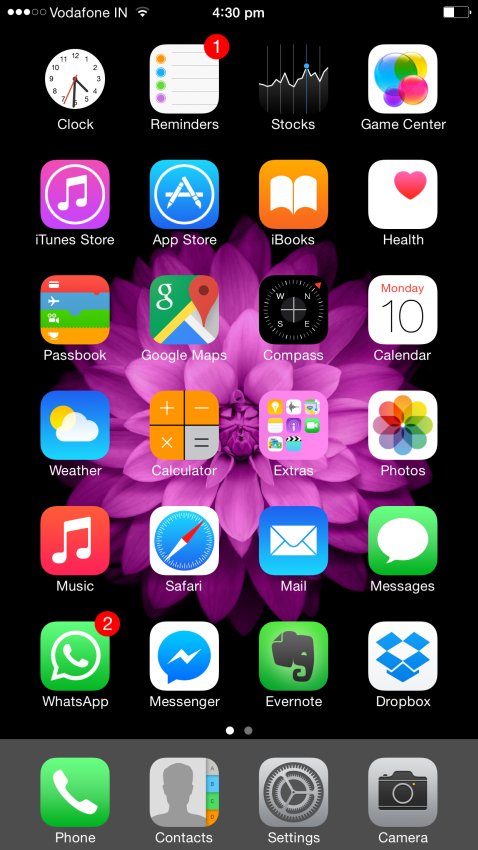 The most notable addition comes in terms of usability. To make most of the big screen, the iOS now supports landscape mode throughout the user interface. It's mostly useful in the Mail client where the emails get listed on the left side while the previews are displayed on the right. As mentioned earlier in this article, the iPhone 6 Plus is too big for one-handed usage. Especially, it's impossible to reach reach the top part of the screen where important buttons such as edit, close, and compose have been placed. If you are hell-bent on using it with one hand though, there's a workaround. You can shift the interface elements down by tapping the Home button twice. While this feature works, it's weird to look at.

The phone runs smooth most of the times. High-end games such as the Real Racing 3 run without a stutter. Despite churning console-grade graphics, the iPhone 6 Plus loads the games faster than any competing Android phone. In terms of gaming performance, the iPhone 6 Plus' is unbeatable. Strangely, it lags while going through the list of wallpapers. I tried it on another iPhone 6 Plus sourced from a dealer, and it too strutters in the 'Choose a new wallpaper' menu. It is good to have a high resolution screen. However, most devs have still not updated their apps with Full HD support. Due to this, many apps including WhatsApp look stretched. Especially, the text looks so big that you feel as if the Accessibility mode is turned on. The Apple Maps are still quite useless in India. Therefore, you still have to rely on Google Maps for navigation.

Multimedia
Going ahead with its flat design, Apple has let go of its iconic cover flow. The albums are shown as flat tiles now. Sonically, the iPhone 6 Plus' output is excellent. Apple's earpods make things even better. What we didn't like here is the iTunes dependability of the iPhone. Unlike Android and Windows Phone, you cannot copy-paste songs on the handset. Everything has to be synced via iTunes. This becomes even more annoying when you have to sit through the painful video conversation process. So while its large screen is great for watching movies, transferring video files via iTunes is a time-consuming process.

Camera
The iPhone 6 Plus features an 8 megapixel camera with dual flash. What separates it from the 4.7-inch iPhone though is the OIS (Optical Image Stabilisation). Little wonder then, the iPhone 6 Plus produces sharper images compared to the iPhone 6. Click here to download and view untouched sample. Especially, in low light conditions, the 6 Plus is miles ahead of the 4.7-inch iPhone 6. 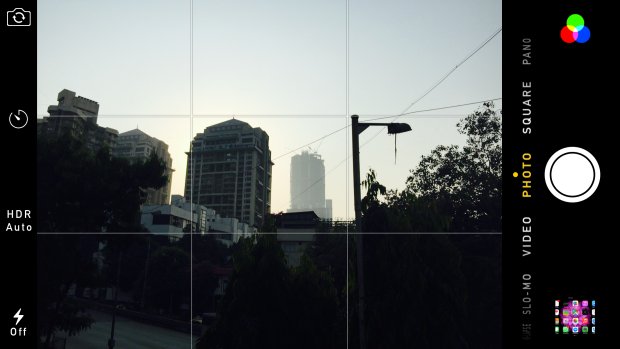 The OIS also does wonder in the video recording mode. It compensates for slight shakes and makes the camera movement smoother. Apart from recording 1080p videos at 30 fps, the iPhone 6 Plus makes HD clips at 240 fps. When played at normal speed, these clips appear 10x slow than the real time. While Apple is not the first company to offer such feature, it is definitely the only one to implement it right.

Since Apple has opened up the keyboard API, you can install third-party keyboards such as Swype and set it as default. The in-build keyboard has got a new text prediction system called QuickType, which does a good job at suggesting you the right words. Battery
The iPhone 6 Plus packs-in a 2915 mAh battery. With normal use, the battery lasts for a day and half. In our video loop test, the iPhone 6 Plus kept-up for over 11 hours on a single charge. That's on-par with most "phablets" from the Android camp.

Verdict
The iPhone 6 Plus is a power-packed device with unbeatable gaming performance. It also features the best screen Apple has to offer. In the camera department, low-light performance and the slow-motion features are amazing. On the other hand, it's the most unwieldy phone the Cupertino company has produced so far. The bigger size has not only hurt the usability of the new iPhone, but also taken away the class and elegance you expect from Apple. In short, if you use a 5.5-inch Android "phablet" for making calls, you are an idiot. And if you use a 5.5-inch iPhone for making calls, then you are an idiot with a lot of money. Possibly, most techies will defend the large screen phones for now. However, a few years from now, we will all look back and laugh at these phones.