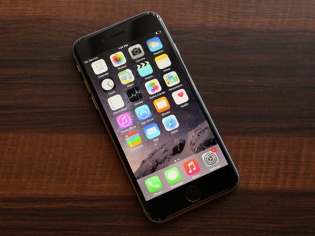 In the iPhone 5 review, I remember writing that, "As Android manufacturers continue to flood the market with absurdly large phones, it's good to see Apple Think Different." Not any more though, as Apple has changed. It's no more a company under Steve Job's leadership, that did things differently. It's not bold enough to tell the world again that the bigger phones are stupid (which is a fact). Apple has increased its flagship phone's screen size to 4.7-inch instead. Moreover, to attract the "phablet" lovers, the Cupertino company went on to unveil the iPhone 6 Plus with a large 5.5-inch screen. So is bigger the better in Apple's case? Aesthetics
iPhone has finally received a long due design overhaul. While the iPhone 5s was all about sharp edges and straight lines, the 6 flaunts rounded corners. The screen glass has a slightly convex curve near the edges. That's similar to what we've seen on the high-end Nokia handsets such as the Lumia 925. Nokia calls it 2.5D screen, while Apple has named it Continuous Surface. This is one of those nice touches that enrich the user experience. As you would expect from Apple, the materials used in construction are top-notch. The unibody is seamless, save for the ports, buttons, and a nano-SIM slot. Be it the curved body or speaker grilles, everything is crafted to perfection. Not many companies in the smartphone business can match Apple's build quality. Despite sporting a bigger screen, the iPhone 6 is thinner than its predecessor. In fact, at 6.9 mm, it's too thin for its own good (*cough* bent-gate *cough*). Undoubtedly, the anorexic body looks impressive, but is quite slippery to hold. If you're still wondering about its footprint, the iPhone 6 is roughly the size of the HTC One.

On Apple's website, You can find a lot of images showing just how amazingly slim the new phone is. However, what they don't show is the camera protrusion. Because of this, the iPhone 6 doesn't rest flat on a table. There's hardly any lens protection, so you better buy a bumper case, unless you want the iSight camera to get scratched. 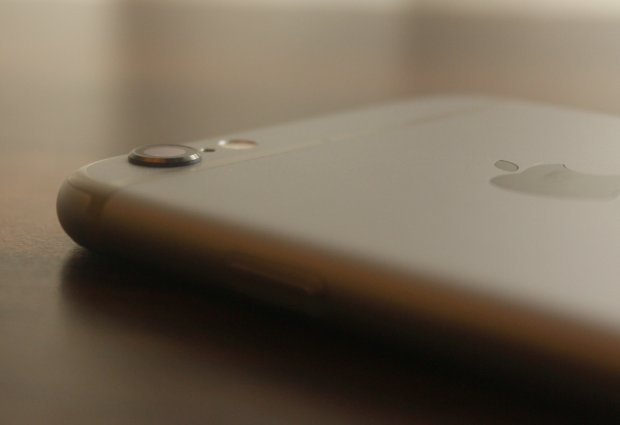 While the iPhone 6 is undoubtedly a great looking phone, many will still find the 5s more elegant. Especially, the HTC One-esque Antenna stripes on the back of the iPhone 6 are a big turn-off. They are eyesores on a beautifully crafted aluminium body.

The iconic Home button features a fingerprint scanner. A 3.5 mm jack, lightning port, and speaker grille are placed at the bottom side of the device. The lock button has been placed on the right hand side. This makes sense considering the iPhone's size has significantly increased in the latest iteration. On the other side, you get volume buttons and a silent switch. Screen
The 4.7-inch IPS screen comes with 1334x750 pixels. Many are complaining about the lack of Full HD screen on the iPhone 6. However, after using it for a few days, I can tell that the iPhone packs in more than enough pixels. The resolution bump keeps the pixel density at 326. To put things in perspective, that's exactly the pixel density of the iPhone 5s. As long as I don't see any stray pixel or jagged edges in the UI, I'm happy with the sharpness offered by the iPhone 6's screen. There's no point in jumping on to the Full HD or Quad HD screen bandwagon, just because some Korean companies are doing it.

Compared to its predecessor, the iPhone 6's screen is a lot brighter. Much like Nokia's ClearBlack tech, the Cupertino-based company has used a polarisation filter to reduce the glare. The only thing we didn't like about this display is its ability to produce blacks. Maybe, Apple will decide to use AMOLED some day to get rid off this issue. Overall though, it's one of the best LCD in the market.

Key Specifications
The iPhone 6 is not just about a big screen. It has got significant hardware upgrade under-the-hood as well. The phone comes with a new 1.4 GHz dual-core A8 64-bit chipset along with the M8 motion coprocessor. For gaming, you get the quad-core PowerVR GX6450 GPU. The 8 megapixel camera features digital image stabilisation. Other specs include 1 GB RAM, 16/64/128 GB internal storage, Wi-Fi, NFC, A-GPS, lightning port, barometer (to measure elevation), 1.2 megapixel front-facing snapper, and 1810 mAh battery. There's no FM-radio and microSD card slot. Apple will probably not add in near future.

Software
The iPhone 6 ships with iOS 8. The latest operating system continues Apple's quest for flat design that begun with the iOS 7. The version 8 does not bring major changes, but looks a lot more refined. Apple has also scaled up the OS for the relatively bigger screen. The colour schemes, icons, and transition animations look exactly like what we have seen in the iOS 7.

The control center that gives access to Bluetooth and Wi-Fi toggles, media controls, and brightness controls has gone under a slight redesign. It still doesn't gel with the rest of the UI design though. 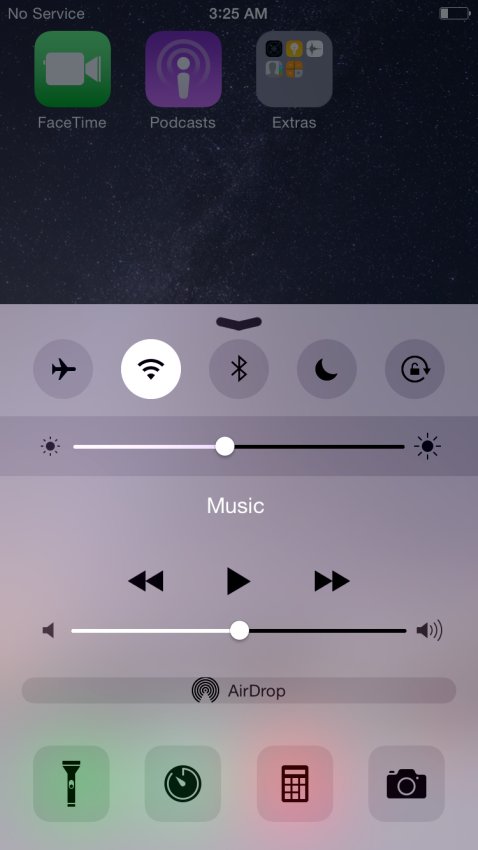 In past, Apple made fun of bigger Android phones. Labelling them not fit for one-handed usage. With this model though, Apple too has lost that edge. Well, you can still use it with one hand, but it's nowhere as convenient as the iPhone 5s.

It's annoying that Apple has kept options such as edit, close, and compose button in top part of the screen. To click them, you either have to use both your hands or double tap the Home button. Doing so, brings the interface elements down, within the reach of your thumb. From the UX point of view, this is a ridiculous workaround. Turning around 40% screen blank, in order to make buttons accessible is not ideal. Since Apple won't go back to making smaller iPhones in the future, a sensible thing to do here would be moving those essential keys to the bottom. 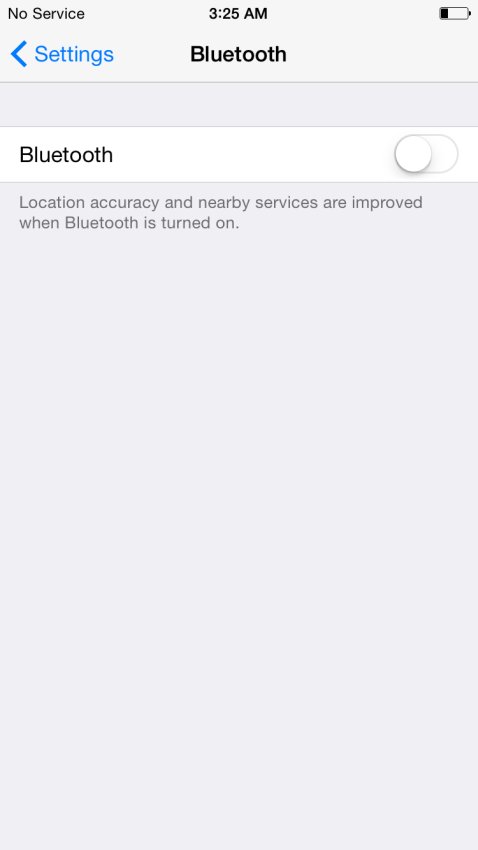 The iOS runs buttery smooth on this phone. Same goes for the games. Even high-end games such as the Modern Combat 5. Even the loading times are faster than that of the competition Android phones. Apple Maps have improved, but they are still no match for the competition. So you're better off using the tried-and-tested Google Maps.

Misc
Similar to its predecessor, the iPhone 6 features a Touch ID sensor in the Home button. Apple's fingerprint recognition is way more accurate than what we have seen on the high-end Android phones. Still, I prefer a passcode rather than using the futuristic (and somehow dystopian) biometrics.

The Touch ID is also an integral part of the new Apple Pay service. The NFC based payment method may become popular in the US, but in India, I don't see this feature to catch-up in near future.

Media
As many would already know, the classic Cover Flow has been let go by Apple. Instead of that you get flat tiles with album art. The phone ships with Apple's EarPods that not only look but sound impressive. In case, you didn't know, the iPhones don't come with the FM radio feature.

Unlike Android and Windows Phone, Apple's mobile operating systems supports limited video formats. Mostly .MOV and certain .MP4 videos up to Full HD are supported by the phone. For anything other than that, you have to sit through the painful video conversation process. You can't even copy-paste your music collection on the iPhone since everything has to be synced via iTunes.

Camera
In the imaging department, you get an 8 megapixel camera. Although the megapixel count hasn't gone up, there are several improvements in the camera assembly. For starters, you get a dual tone LED flash that produces relatively natural light. The interface offers swipe controls to switch between Photo, Video, Time Lapse, and Pano mode. Compared to the competition, it's very easy to produce great Pano shots on the iPhone 6. In the Photo mode, there's even a dedicated button for colourful hipster filters. 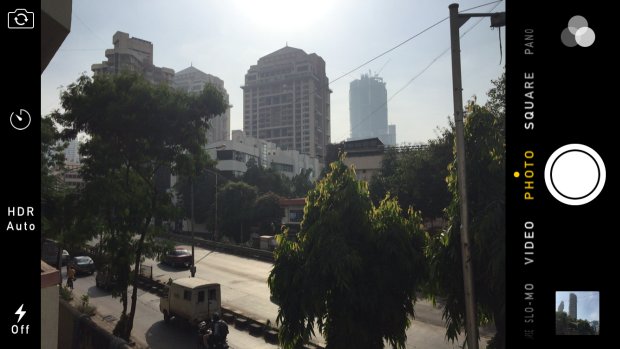 The camera is swift at taking images. If you don't like on-screen shutter, you use Volume + button to snap images. The quality is excellent for an 8 megapixel lens. Don't expect it to compete with the LG G3 and Nokia Lumia 930 though. If you're coming from the iPhone 5s, the improvements are hardly noticeable. Click here to view the camera sample.

The iPhopne 6 captures 1080p videos at 60 fps. The quality of which is very good. Apple has also added a neat slow motion feature. Here, the phone records HD videos at 240 fps and then plays it at a regular frame-rate. While the competition uses noise cancellation mics to achieve stereo audio in video recording, Apple is still stuck on mono channel.

Cellular And Messaging
The latest iPhone is compatible with nano-SIM. The phone's network reception was excellent. We found the earpiece to be loud and clear. The phone's Wi-Fi reception was also spotless. Mostly because it's the first iPhone to support Wi-Fi 802.11 a/b/g/n/ac standard. The first phone to introduce it was Samsung's GALAXY Mega 6.3.

Since Apple has opened up the keyboard API, you can install third-party keyboards such as Swype and set it as default. The in-build keyboard has got a new text prediction system called QuickType, which does a good job at suggesting you the right words. 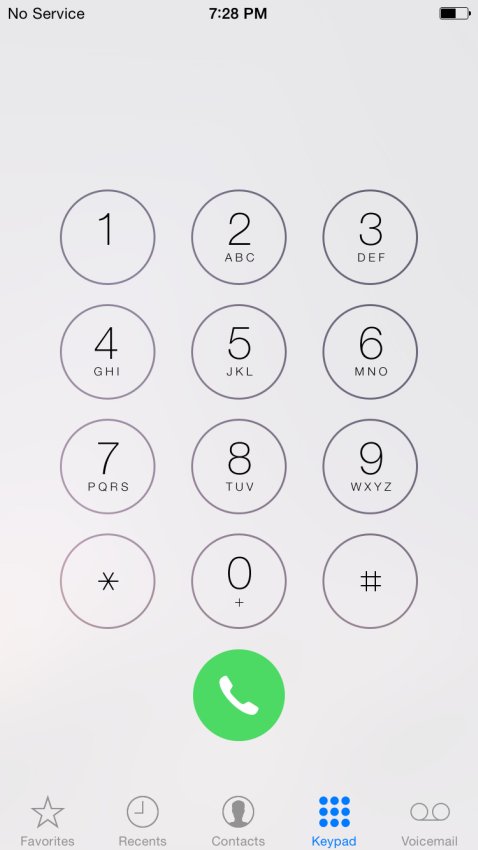 Verdict
Instead of deciding what's right or wrong, Apple is now ready to deliver what users want. The iPhone 6 is bigger, yet thinner than its predecessor. Its design may not surpass the charm of the iPhone 5s, but is still one of the best in the industry. The camera and music quality are also great. So if you're planning to buy a top-end smartphone this Diwali, the iPhone 6 is definitely a great option. However, if you're already using the iPhone 5s, better hold on to it. For those who can't stand Apple's restrictions, the only classy handset we can suggest right now is the HTC One (M8).

(Disclaimer: No iPhones were bent during this review)