Some of the features that come bundled with iOS 9 definitely make it more user friendly than ever.

The latest iOS 9 comes with a handful of innovative and great features which actually make the latest mobile operating system by Apple stand out in the crowd.

However, if we just look at how things have come along the way, we can find many of these new features already existing in Samsung and other smartphones which run on Android Operating System.

However, considering the lineage of Apple's iOS, the iOS 9 seems to be breakthrough and here is a list of 5 features we find to be simply awesome. While iOS 9 comes with a longer battery life, Apple seems to have finally added a power saving mode which the company claims to provide at least 3 hours of extra battery life. On a baseline, the iOS 9 is said to provide at least 40-50 minutes longer battery life than the iOS 8. However, when the iPhone is switched to the Low Power Mode, it is expected to give 40 extra minutes and when the iPhone reaches extreme low power, approximately 3 hours is said to be given as bonus with a few sacrifices. In the power saving mode, the iPhone is said to lower the brightness to 35% and disable a few background tasks to provide 3 hours of extra battery life.

Receiving an iOS update has always been a nightmare to many of its users, especially those who would have bought the iOS device with 16 GB internal storage. But, the new iOS 9 seems to be a sigh of relief to every iPhone, iPad and iPod user. Comparing the iOS 9 with the iOS 8, we can see a drastic improvement in making the latest update as light-weight as possible. While the iOS 8 required at least 4.58 GB of free space to update, the iOS 9 will be needing a mere 1.3 GB of free space. Also, the iOS 9 is pretty much clever in the sense that it can also remove apps temporarily and re-install again to make updates hassle free for those with less than 1.3 GB free space. 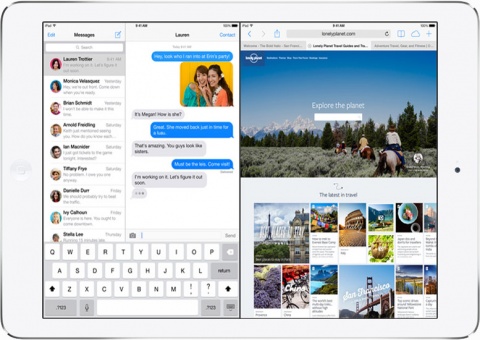 Multitasking is again a massive iOS breakthrough and with iOS 9, Apple allows users to perform two types of multitasking - Side-by-Side and Picture-in-Picture. These multitasking feature is still available only on iPads and not on iPhones and iPods. However, the iPhone users should also not worry about not having this feature as of now because Apple has announced that it would be gradually rolling out this feature to smaller screen devices too. Speaking about this side-by-side multitasking, it would definitely allow iPad users to take their working style a level up. The USP is that, users can also re-size the split screens bigger or smaller and can also slide it to the edge of the screen. iOS 9 comes with an improvised keyboard with slight graphical changes. However, a major update in the keyboard section is that the iPad users will be benefiting more through 'QuickType' which comes with the iOS 9. The new keyboard layout adds a dedicated space for important shortcuts like cut, copy and paste. With this new keyboard, users can also use two-finger touch to operate much like a track-pad which allows you to scroll through the document and highlight text easily. With iOS 9, it looks like Apple has finally brought in a tough competition to the much popular Flipboard news app. It is important to note that Apple has worked with some of the major publishers like The Economist, The Telegraph, Fortune, Time, Vogue, Quartz, CNN, Wired and many more to create some rich and valuable content which Apple users can enjoy. Along with this, the Apple News is also said to offer a vivid experience in full screen and the company has tried to integrate the photos and videos directly into the articles.

While we find these 5 features to be quite spectacular, the freshness of iOS 9 doesn't end here. In-fact, it starts here and the latest iOS version comes with much more features where in we find it really difficult to sum up in the top 5 list.

However, here are some other features we find interesting in iOS 9.