Nikola Tesla would have been proud of this phone. 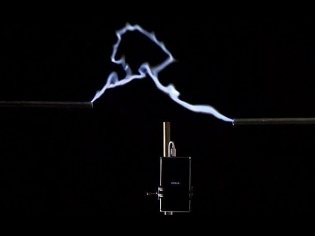 With its last year’s flagship phone — the  Lumia 920, Nokia helped the induction charging (Qi-standards) to become mainstream. If that wasn’t cool enough, some crazy scientists from Nokia have now teamed up with the University of Southampton to figure out if a smartphone can be charged with lightning (yes, you heard that right).

So how do they play with such a deadly phenomenon? Well, the experiments had been carried out in a controlled environment (Faraday’s Cage, to be precise) at the University of Southampton. Using transformers, scientists manage to send alternative current of over 200,000 volts across a 300 mm gap. This is said to generate heat and light similar to that of a lightning bolt. The signal is then stepped into a second controlling transformer, which charges the phone. The experiments turned out to be a success, proves that a device can be charged with electric current passing through air. What surprised even the scientists, is that Lumia 925’s circuitry could withstand the noisy power signal. Here's what Neil Palmer had to say: "We were amazed to see that the Nokia circuitry somehow stabilised the noisy signal, allowing the battery to be charged in only seconds". The setup at University lab.

It's said that Nikola Tesla had demonstrated the illumination of wireless lamps in 1891, but details of that experiment are scarce. He spent the rest of his life completing his dream project — the Wardenclyffe Tower (also known as Tesla Tower). Upon its completion, it was expected to transmit energy across the globe without wires! Unfortunately, due to financial issues, Tesla had to give up on this project. And he didn’t have KickStarter.com back then, to help the genius' mind. Well, let’s get back to the present. Now, this current experiment carried out by Nokia may not be the first of its kind, but is definitely a well documented one. This success doesn’t mean that the upcoming Lumias will automatically charge during a thunderstorm. But you never know where technology will take us in next couple of decades. Take for instance cellphone cameras. Twenty years ago, who would have thought that a 41-megapixel camera phone could be a reality?