A list of handsets that made a big splash this month. 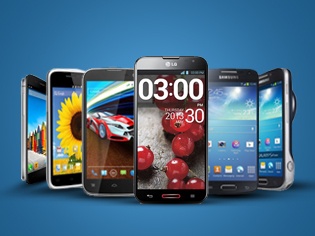 Too busy to keep up with the latest developments in the world of technology? Well, the laptop, camera, and TV market may not change drastically in a month's time, but in the smartphone industry, a lot can happen in 30-odd days. No need to panic though, as we are glad to present to you all the important smartphone launches in India over the past few weeks, right here.

Micromax Canvas 4 A210
Price: Rs 18,000
This was undoubtedly the most anticipated handset in India. Prior to the announcement, Micromax had put this phone on pre-order with a booking amount of Rs 5000. And guess what, without even knowing its specs and price, reportedly 11,500 people took the leap of faith! Now that says a lot about Micromax’s brand power in India. The phone is powered by a 1.2 GHz quad-core processor based on the Mediatek MT6589 SOC. It has 5” IPS screen with 720x1280 pixels, 13 megapixel rear camera, 5 mp front-facing snapper, 1 GB RAM, 16 GB of internal storage, microSD card slot, Wi-Fi, Bluetooth 3.0, Dual-SIM support, 3G, and 2000 mAh battery. The specification are not bad at all, but given the crazy hype surrounding its launch, we were a tad disappointed as we were expecting a lot more than a couple of minor enhancements for the Canvas HD. For more details, check out our hands-on article. Plus, click here to find out whether the Canvas 4 is a rebranded BLUE Life One. XOLO Play T1000
Price: Rs 16,000
XOLO, a domestic brand known for launching the first Intel-based smartphone, has now unveiled the most affordable NVIDIA Tegra 3 device in India. Dubbed as Play T1000, the phone’s quad-core processor is clocked at 1.5 GHz, and is coupled with a 12-Core ULP GeForce GPU. It sports a 4.7” IPS screen with One Glass Solution (OGS) tech. Other key features include an 8 megapixel rear camera, 1 GB RAM, 4 GB internal storage, microSD card slot, and 2000 mAh battery. Unlike most domestic Android phones, the XOLO Play T1000 only supports a single-SIM, which is a relief for those who are not fond of managing multiple SIMs. The phone runs Android 4.1.1 (Jelly Bean) and comes with one-touch access to the NVIDIA TegraZone from where users can access various NVIDIA TEGRA 3 optimized games. Needless to say, this handset can give some serious competition to the Micromax Canvas 4. Expect a detailed review shortly. Spice Pinnacle FHD Mi-525
Price: Rs 17,000
If XOLO Play wasn’t enough, here’s another phone that can give the Canvas 4 a run for its money. Named the Spice Pinnacle FHD Mi-525, this handset is powered by a 1.5 GHz processor, and has 1 GB of RAM. Its 5" full-HD screen beats the Canvas 4’s 720p screen (at least on paper). The FHD-MI-525’s other features include an 8 megapixel autofocus rear camera, 1 GB RAM, 8 GB internal storage, microSD card slot, dual-SIM support (3G), and 2100 mAh battery. It runs Android 4.2 (Jelly Bean), and comes loaded with numerous features including Pop-up Play, Spice Cloud support (2 GB free storage), direct call, intelligent answer, and flip-to-mute. While the FHD Mi-525 betters the Canvas 4 in many departments, the latter still has an edge when it comes to the camera and internal storage. Spice has cleverly pegged this handset at 17,000, making it Rs 1000 cheaper than its key rival, the Canvas 4. LG Optimus G Pro
Price: Rs 42,500
Hoping to take on the GALAXY Note II, the Korean brand LG has finally brought the Optimus G Pro to India. Unlike most LG phones, this one has a Samsung GALAXY-esque design language. The oversized phone sports a 5.5" Full HD IPS screen. It packs in a 1.7 GHz Qualcomm Snapdragon 600 quad-core CPU. For photography, there's a 13 megapixel camera, and a 2.1 mp front-facing snapper to make video calls. Other features include Wi-Fi, Bluetooth, A-GPS, microSD card slot, and 3140 mAh battery. On the software front, you get Android 4.1.2 (Jelly Bean) with LG's customised UI on top of it. Under a limited period offer, LG has thrown in complimentary induction charging accessories worth over Rs 4,000. For more coverage, read our first-impressions of the LG Optimus G Pro. And stay tuned, for the comprehensive review. Samsung GALAXY S4 Mini
Price: Rs 28,000
After launching the unwieldy Mega phones, Samsung has finally rolled out a handset that fits perfectly in your hand. Dubbed the GALAXY S4 Mini, this phone comes with a Super AMOLED screen with 540x960 pixels. Despite having ‘S4’ in its name though, the Mini hardly has anything in common with the original S4 in terms of hardware. It packs in a 1.7 GHz dual-core Krait processor and 1.5 GB RAM. For photography, there's an 8 megapixel camera. Other features include Wi-Fi, A-GPS, Bluetooth 4.0, IR Blaster, and a 1,900 mAh battery. In terms of software, the TouchWiz skin based on the latest Android 4.2.2 offer many of S4's interesting features such as Sound & Shot, WatchON, and Group Play. For Rs 28,000, the handset is surely overpriced considering the good-old GALAXY S III, which comes with a better screen and more powerful hardware, is available for around Rs 25,000. Samsung GALAXY S4 Zoom
Price: Rs 30,000
In an attempt to make a phone with an impressive camera, the Korean giant has ended-up making a camera that tries hard to be a phone. Called the GALAXY S4 Zoom, this device has a 16 Megapixel BSI CMOS sensor, Xenon flash, and a 10X optical zoom with optical image stabilization. The S4 Zoom offers various modes including Beauty face, Best photo, HDR, Panorama, Best face, Drama, Eraser, and Sound & Shot. It comes with a Zoom Ring that can be used to activate the Quick Launch and Shortcut features. For spec junkies, the phone packs in a 1.5 GHz dual-core processor, 1.5 GB RAM, 8 GB of internal storage, and microSD card slot for further expansion. It has a 4.3" Super AMOLED capacitive touch-screen with pixel dimensions of 960x540. The phone runs the latest Android 4.2 (Jelly Bean). That covers most of the major launches for this month. If there are any more, we will certainly let you know once they are out. Also, we will review each of these handsets in depth for you, in case you intend to buy any of these new releases.