Home » Features » Is The Micromax Canvas 4 A Rebranded BLU Life One?

Is The Micromax Canvas 4 A Rebranded BLU Life One? | TechTree.com

Is The Micromax Canvas 4 A Rebranded BLU Life One? 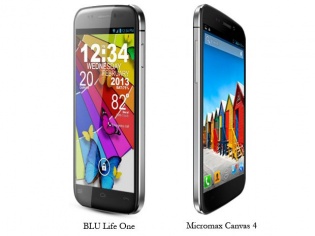 Micromax takes pride in being the biggest Indian phone-maker in terms of market share. With its Canvas series, it has taken the battle to Samsung. According to a report from Strategy Analytics, Micromax is the 12th largest handset manufacturer in the World. The company’s official website states that “Our strategy focus on innovating, designing and using the latest technologies to develop products at affordable prices.” However, this so called strategy goes for a toss, when it comes to product portfolio. For instance, Micromax’s Q55 Bling was inspired by the Nokia 7705 would be an understatement. If you think that Micromax has stopped doing such things after becoming a global company, then you’re in for a disappointment.

This time around, its flagship phone Canvas 4 feels like a carbon copy of BLU’s Life One handset. Before you argue that it could be the other way around, let me tell you that the Life One was launched in March 2013. As mentioned in our Canvas 4’s hands-on article, even the minute design elements are identical. And yes, this also includes the metal frame. Not convinced? Well, check out these images: 'Can' you spot the difference? This doesn’t stop here, even the innards of these two phones are exactly the same. Both the handsets are powered by a 1.2 GHz quad-core processor based on the Mediatek MT6589 SOC. Then, there’s a 5” IPS screen with 720x1280 pixels, 13 megapixel rear camera, 5 mp front-facing snapper, 1 GB RAM, 16 GB of internal storage, microSD card slot, Wi-Fi, Bluetooth 3.0, 3G, and 2000 mAh battery.

BLU is a Miami-based company, which is quite popular in Latin America. In that part of the world, the Life One retails for $300 (approx. Rs 18,000). That’s exactly the price tag Micromax Canvas 4 carries in India. I think it’s safe to assume that both these companies are ordering phones from the same OEM. So it's pretty clear that Micromax’s latest flagship is just another rebranded phone. But does that affect your buying decision? Do let us know in the comments section below.