Apple's iOS 9.1 Is Fast, Faster Than Google And Android

As Apple rushed to fix its bug-ridden iOS 9.0.2 with a stable fix in a little over a month, you can blame Google for being laid back with its upgrade processes. If there is one thing we do appreciate about Apple among other mobile operating systems like Android and Windows Phone, is the speed it takes to deliver updates. And with iOS 9.1 it literally broke a record.

As Forbes’ Gordon Kelly recently reported, Thinky Bits data showed how iOS 9.1 went from a beta 1 to a beta 5, in just 33 days and it was just yesterday, that Apple pushed out iOS 9.1 to iDevices worldwide. No, this was not bug fixing update but a milestone one that came with a number improvements, those that were needed to make iOS usable on an iDevice.

That is pretty quick! And while Apple does control the hardware and software bits (there’s less fragmentation to deal with) on an iPhone/iPad, it did pull off a milestone update in a record 45 days.

Yes, I did rant about how bad iOS 9.0.2 was on an iPhone 6 Plus, but after the iOS 9.1 update, I have never seen my iPhone 6 Plus work smoother. Oddly, some features in third-party apps have also popped up. I have noticed how WhatsApp notifications (without a recent update) now shows a Quick Reply option similar to the Messages app that is native to iOS. 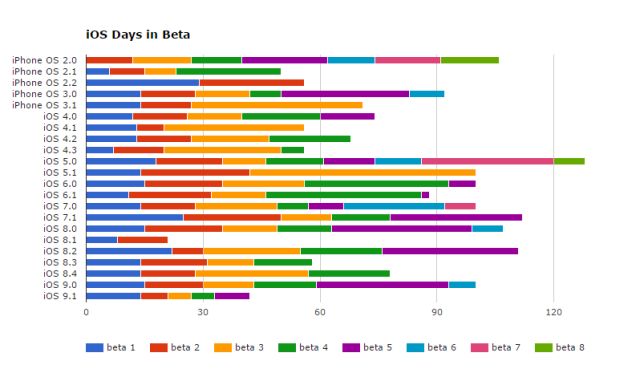 Overall, the update is super smooth and pretty reliable, and more importantly, stable. And all of those qualities were pathetic on iOS 9.0 through 9.0.2. There are no more stutters while scrolling and no lag as well.

And while I was used to the usual iOS update cycles (never update iOS to the first version of a major update), iOS 9.0.2 almost convinced me to replace my iPhone with an Android one.

So yes, it did come on time, soon enough, to bring my faith back into the only Apple product I own. Which made me think about why Android cannot deliver something similar at a quick pace. Moreover, bug fixes aside, vulnerabilities are Android's current problem.

Google has plenty of coders and clearly pushing out an update is not an issue, so is it just Google’s laid back nature with Android?

Why should a consumer pay up to Rs 50,000 for an Android smartphone from a reputed brand, and realise that his/her Android update will arrive just before the next one is announced by Google?

Really, my only option (if I were to switch over) would have been a Nexus 5X or a Nexus 6, as the updates (security or bug fixes) do arrive on time. But for the rest of the branded droids out there, it takes 4 - 6 months.

Google is doing something about security patches. Last we heard at the Black Hat Security Conference, Google was planning monthly security patch roll outs so that its devices remain updated (which is pretty commendable). But what happens to the millions of non-Nexus devices out there? Do we hold Google responsible for the same?

Actually you can. Google should tighten the strings on software customisations (limit them just to 3rd party launchers) by not allowing manufacturers to delve any deeper into Android.

While such a move would throttle innovation and bring all manufacturers to the same plane, it would allow Google to have back door access to Android on all its smartphones. Moreover, manufacturers have already begun issuing updates for their hardware via the Play Store (HTC, ASUS etc) So clearly, the ball is in Google’s court, and yes, you can blame Google for being slower than Apple.