A promising handset let down by Amigo UI and pricing. 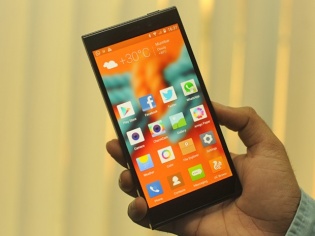 No matter how crowded the Indian smartphone market has become, Chinese brand Gionee is determined to cement its place here. The compnay's Elife E6 was a worthy flagship. To fill in its shoes, the company has rolled out the Elife E7. The new handset packs in some serious hardware. For starters you get the same powerful chipset as that found in the LG Nexus 5. There's 5.5-inch Full HD IPS screen and 16 megapixel camera. This definitely looks good on paper, but should you be buying it over the Nexus 5 and Lumia 925? Design And Build
If the E6 was inspired by iPhone, the E7’s back is reminiscent of the Lumia 1520. Especially the camera protrusion looks very similar. Of course, the E7 is relatively smaller, and feels less premium compared to Nokia's offering. The glossy finish makes it hard to grip. The front of the device is covered by the scratch resistant Gorilla Glass 3. For navigation, you get three capacitive keys — Home, Back, and Menu. Gionee has done a good job at keeping the phone's footprint in check by reducing the size of its bezels. That said, with a 5.5-inch screen, the single-handed operation is out of question.

Like most high-end phones, the E7 features a unibody design. The battery is non-user replaceable. The phone lacks microSD card slot and there's a pop-open tray for a micro-SIM.

Screen
The 5.5-inch Full HD display is impressively sharp. 1080x1920 pixels in 5.5-inches make for the pixel density of 400 ppi! For an IPS screen, the colour reproduction is very good. The display also offers wide-viewing angles. The response to touch was spot on too. All in all, the screen is as good if not better than that of the Nexus 5. Specifications
The Elife E7 is fuelled a Snapdragon 800 chipset clocked at 2.2 GHz. It's complemented by 2 GB RAM. In the 16 GB version (which we have received for the review), only around 8 GB storage is user accessible. That's one major downer considering the phone lacks microSD card slot. The 32 GB variant comes with a 2.5 GHz processor and 3 GB RAM. The phone packs in 2500 mAh battery.

User Interface
The phone runs Android Jelly Bean 4.2. The user interface has been heavily modified by Gionee. It looks a lot like the iOS 7. There's no dedicated menu, so all your apps show up on the homescreens. To reduce the clutter, you can group the apps in folders. Amigo UI does make use of various gestures. You have to swipe up to unlock the phone. Swiping down from the edge of the screen reveals a notification bar, while performing the same gesture from the icons area will result into a screen lock. That's quite confusing for first few days, but nothing you can't get accustomed to. Gionee has done away with widgets, which is good move since it brings some uniformity to homescreens.

Performance
The biggest problem with this phone is that it stutters when navigating between the screens. Well, what's the point in having a quad-core processor when it can't assure smooth user experience?
Moving onto gaming, the E7 does an impressive job. With a 2.2 GHz quad-core processor, 2 GB of RAM, and Adreno 330 GPU inside, you can't expect otherwise. So as fat as the gaming is concerned, the E7 is as good as Nexus 5. To gauge its performance we ran the popular benchmarks on the Elife E7, and here are the results:
AnTuTu — 34,700
Quadrant — 20,857 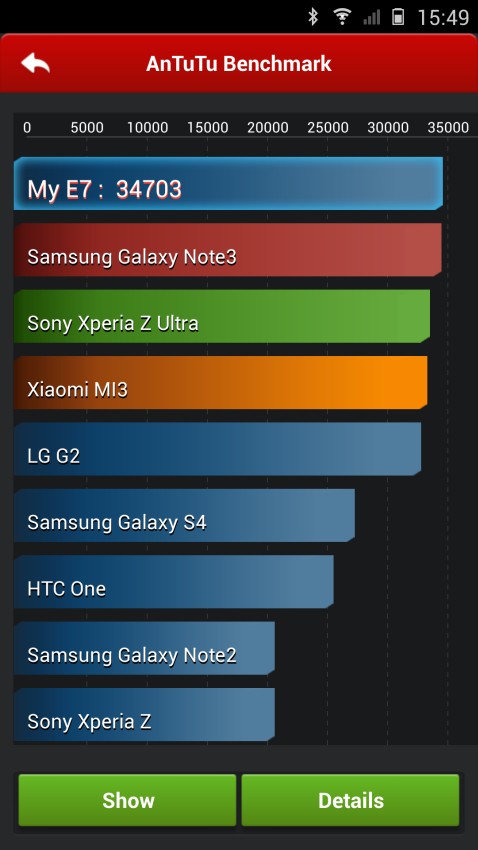 The phone’s music output is decent. It’s not what you expect from a 28k handset though. Moving onto video playback, the phone can handle popular file formats up to 1080p.

The phone’s Wi-Fi and network reception was great. In-call voice was loud and clear too. The only niggle here is that the SIM tray mechanism is erratic.

Camera
The Elife E7 boasts of a 16 megapixel rear camera and 8 MP front-snapper. That's the highest megapixel count you get in Android at this price tag. The images contain plenty of details in daylight. They look sharp on the phone’s screen, but on PC, you can see all the noise that’s there. Moreover, in low-light conditions, the camera tends to introduce purple tint in photographs. Click here to view view the image sample.

The E7 can record Full HD (1080p) videos at 30fps. The camera is good at locking focus. The videos offer smooth playback and good amount of detail. In all, the E7’s camera is better than that of the Nexus 5, but not really a threat to the GALAXY S4 and Lumia 925 in the photography department.

Battery
The phone comes with 2500 mAh battery. With normal usage, the juice lasts easily over a day and half. Looking at the phone’s screen size and processor, the battery performance is quite good.

Verdict
The Elife E7 sports an impressive Full HD display. Its multimedia performance is good too. However, it falters at basic task of providing smooth user experience. The 16 megapixel camera is good, but doesn’t live up to the hoopla surrounding it. The biggest problem with the handset is its Rs 28,000 price tag. For this much money, you can get the Nexus 5, GALAXY S5, and Lumia 925. At least for now, Gionee doesn’t stand a chance against biggies such as Samsung, LG, and Nokia.