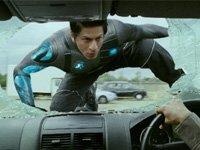 
Ra.One is big — not only due to the crazy amount of money invested, but also the effort put into bringing spectacular special effects to Bollywood movies. This isn't the first Indian superhero flick, but it's certainly the first time anyone has bet 175 crores (estimated) on a genre that does not appeal to many Indians.


Story
The movie starts off with UK-based Barron Industries showcasing a new technology that enables people to interact with virtual objects. Shekhar Subramaniam (Shah Rukh Khan) is a nerd who works in the gaming department of the same company. While Shekhar believes in heroes with values, his son Prateek (Armaan Verma) prefers bad guys since they have the freedom to win by any means. Desperate for his son's approval, Shekhar designs a game with a near-invincible villain who possesses a truckload of powers. Shekhar's team, which includes Jenny (Shahana Goswami) and Akashi (Tom Wu), decides to name the super-baddie Random Access Version 1.0 or Ra.One (phonetically Raavan). Modelled after Shekhar, the hero of the game and Ra.One's enemy is labelled G.One (Jeevan in Hindi), as in the Good One.

The game's launch meets with a positive response, and even Prateek finds it impressive. Logging in as Lucifer, he kicks Ra.One's ass. Furious, Ra.One finds a way to enter the real world using Barron Industries' aforementioned technology. The explanation given is quite vague, so leave your brains at home. However, it still isn't as bad as, say, gaining arachnid-like qualities after a spider bite.

Upon entering the real world, Ra.One kills Akashi and Shekhar in an attempt to hunt down Lucifer. Prateek quickly realizes that only G.One has a chance to defeat Ra.One. He brings G.One into the real world with Jenny's help. What follows then is a fast-paced clash between good and evil.

The movie borrows heavily from Terminator 2, TRON: Legacy, and Iron Man, yet manages to remain desi at heart. The bonding within the Subramaniam family is effectively demonstrated without becoming boring. The tone of the movie is light and tries not to make viewers gloomy. As expected, Shah Rukh keeps the energy flowing throughout. He portrays the stereotypical South Indian dad in a playful, self-mocking style, while his performance as a superhero is also convincing. Full marks to him and JK Tyres for eating curd and noodles without using a fork. Débutant Armaan's performance as Prateek is excellent, coming across as being high on confidence. Fortunately, Kareena Kapoor as Sonia Subramaniam (Prateek's mother) has acted according to the role, without resorting to her usual annoying hyperactivity. On the flip side though, Arjun Rampal as Ra.One is the weakest link in the movie. He never manages to be as menacing as you'd expect of a supervillain.


Special Effects
As you've no doubt figured out by now, the story is hollow. Additionally, at times the plot stoops to being just plain stupid. Having said that, this is how superhero movies are supposed to be. Thankfully, the movie is so fast-paced that you'll hardly get time to think about these things.

On the other hand, the special effects in Ra.One are extremely complex and look excellent. These are not good just by Bollywood standards, but in fact are on par with anything that's come out of Hollywood. Till now, Indian movies have used the streets of London only to film a song or two. This movie, on the other hand, goes on to show a thrilling chase sequence across the city. There's destruction around every corner, and it's generations ahead of what we've been seeing in Hindi movies thus far. Not to mention, the wire work and computer graphics are almost flawless.

Although the entire movie is filled with spectacular effects, the train sequence in the second half deserves special mention. The visually stunning scene was filmed using a record 23 cameras, quite a feat for Indian cinema. The heart-thumping background score makes the experience even more engaging. The destruction of Mumbai CST station's Victorian structure has been brilliantly rendered. I see this as India's answer to Roland Emmerich. Also, Robert Kurtzman of Predator and Hulk fame has designed impressive suits for both characters. What's refreshing is that the superhero isn't forced to put on underwear over his pants.

I don't like songs because they interrupt the story, and I wish this movie had no songs. Still, if I have to mention one, Dildaara is pretty melodious — except for the "Stand by me" part that spoils it every time.


Verdict
Ra.One is not a movie that makes you think, but then Anubhav Sinha never wanted it to be like that. He has simply kept the movie going at the right pace, while awing viewers with stunning visuals. It's a highly polished movie that sets a milestone for the Indian special effects industry. Overall, it's a great superhero flick that has all the elements of a complete family entertainer. If only the story and title character had been strong, the movie could have been even better.