The poor man's N9, currently selling like hot cakes in the market. 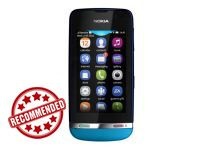 Thanks to Google's Android, the mass-market segment has been flooded with cheap smartphones. Although this is a welcome scenario, the user experience and build quality on offer in most of the handsets leaves a lot to be desired. This is where Nokia's Asha series steps in, with its easy-to-use interface and sturdy design. However, does the latest Asha 311 have enough power and features to fight off the droid army? Let's find out.


Design And Build Quality
The standard package includes the handset, charger, and a pair of earphones. The phone measures 4.2" (l) x 2" (w) x 0.5" (13 mm) (d), and tips the scales at 95 grammes. Although the device is available in decent blue and dark grey colours, the review unit I received was pink (Rose Red). While this shade is definitely not my cup of tea, girls and "some guys" might actually like it. The scratch-resistant glass on the front not only protects the display, but also provides an upmarket feel to the handset. As expected, the build quality is great. However, I didn't quite like Nokia's decision of using an extremely glossy back panel. The handset's 3" capacitive touchscreen (240x400 pixels) is protected by Corning's Gorilla Glass. The display is sharp and bright, while its contrast is better than what you get on similarly-priced handsets. Although Nokia hasn't mentioned it, I guess the company's ClearBlack display technology has been used here to some extent. On the flip side though, there's no way to adjust the screen brightness, which is certainly a strange omission even if it does have an ambient light sensor.

The Asha 311 is powered by a 1 GHz CPU and has 128 MB of RAM. It also packs in a 3.2 mp camera and Wi-Fi connectivity. The handset's detailed specs are as follows: The phone runs the Java-based Series 40 OS. After experiencing the Asha 300's terrible UI, I didn't have high hopes from this handset. However, I was in for a pleasant surprise. The interface has been heavily inspired by Nokia's MeeGo operating system. Right from the lock screen, it doesn't look like a typical S40 at all. The interface lacks a Menu or Home button, while the navigation is accomplished through swipe gestures made popular by the N9. By removing the unnecessary customisation options, Nokia has delivered a clutter-free interface. An Android-inspired status bar provides quick access to calls and messaging notifications. Other than that, it also contains toggle buttons for Wi-Fi, Bluetooth, and mobile data (internet connection). Thanks to its 1 GHz CPU, the UI offers a snappy and pleasant experience. that's far better than laggy Android handsets in the same price range.

The Asha 311 comes with the Nokia Browser (an Opera Mini clone) and dedicated clients for e-mail, Facebook, and Twitter. Since the handset lacks GPS, the Maps 2.0 software uses your Wi-Fi hotspot or 3G cell tower info to zero in on your location. The accuracy of this feature is impressive — it correctly identified my general area, even though my phone didn't have a SIM and I was using only the Wi-Fi connection.

The Nokia Store offers plenty of apps including WhatsApp, Nimbuzz, and Zomato. Pre-installed games include a Java version of Angry Birds, which seems to have become a must-have game for every touchscreen phone. Also, thanks to the Finnish manufacturer's deal with Electronic Arts, you can download up to 40 EA titles for free. Overall, the only thing that separates this handset from smartphones is its lack of true multitasking. Even so, you can minimise the music player to the background and fire up other apps. Like every other entry-level phone, the 311 too comes with terrible earphones. However, coupled with decent aftermarket IEMs, it delivers superb sound quality. The manufacturer has duly covered equaliser settings and FM radio. What's more, Nokia's Internet Radio allows you to tune into thousands of radio stations across the world. Although it works just fine with EDGE, a 3G or broadband Wi-Fi connection is required for higher quality streams. Furthermore, the media player can handle MP4, DivX, XviD, 3GP, and WMV videos up to 480p, and the 3" screen is good enough for watching movies. A great addition is the fact that you can use the 3.5 mm jack to hook up the video to a TV screen, which is another feature rarely found in this price range.

The 3.2 mp fixed-focus camera doesn't disappoint — only if you consider it a bonus feature. It performs badly in low-light scenes, but is quite decent outdoors. The snapper can also record video in 480p, but it's nothing worth writing home about.


Telephony, Messaging, Battery And Verdict
With normal use, the handset's 1110 mAh battery can easily last for a day and a half, with the call quality and reception being excellent throughout. When it comes to messaging, the 3" screen can be quite cumbersome to type on. However, switching to landscape mode makes texting a breeze, as long as you don't have to type a long message.

For Rs 6400, the Asha 311 offers a snappy and clutter-free UI, great sound quality, extensive connectivity options, and a bunch of features that are generally found in smartphones. Considering the gadget's cost, its minor shortcomings that include the lack of a brightness settings aren't a deal-breaker in the least. If you're a looking for an entry-level touch device, the Asha 311 is the way to go. However, die-hard Android fanboys looking for a cheap smartphone will be happiest with the Samsung GALAXY Y.

Incidentally, the 311 is currently sold out in many brick-and-mortar stores, and is quickly becoming unavailable online as well, which is a testament to its popularity with the public. In fact, while Flipkart.com and BuyThePrice.com had the phone in stock when I started writing this review, they ran out by the time the I was finished a few hours later. The store links provided at the top of this review currently have the handset for purchase, but it's not going to stay that way for long, so you'd better act fast if you're planning on buying this gadget. View more images in the gallery below.

At the time of writing the review, we had observed that the phone, which was listed as "In Stock" with several online retailers, changed to "Out of stock" in less than a day. Other online stores reported the inventory as "Last few units remaining". Moreover, as the following links show, there seems to be a heavy demand in mobile shops as well: http://nokiapoweruser.com/2012/08/19/brisk-sales-send-asha-311-out-of-stock-at-oficial-nokia-shop-and-other-online-retailers/ http://nokiapoweruser.com/2012/08/29/more-retailers-confirm-asha-305311-a-big-hit-in-india-selling-twice-as-many-as-all-entry-level-android-phones/ Therefore, the statement made was based not on a "biased" opinion, but on the current market situation. It's possible that the phone had a greater demand in other areas of the country, or that Nokia rushed in additional stocks, which is why you were able to find units in the stores you went to.
Submitted by Badri 'BADJAG' Narayan on Wed, 12/09/2012 - 21:23

Hello Cool Desi Boy, As far as I know, the 311's firmware is quite stable. The Nokia 5130 Xpress Music was a terrible phone, no wonder you had a bad experience with it. The AV cable should work fine, but I'm not sure whether Samsung's OTG cable will be compatible with Nokia. The phone can connect to Wi-Fi WPA-PSK networks. I'm not sure about all the third party apps, but I;m sure that Opera mini works with Wi-Fi. It can handle MP4 videos up to 480p.
Submitted by Chandrakant 'CK' Isi on Tue, 18/09/2012 - 19:57

GPS is not supported in this phone. However, the inbuilt Nokia Maps app can still obtain your location through the cell tower you're connected to, IP address, Wi-Fi connection, etc. Through this, it will still be able to provide you with navigation services. Having said that, the navigation will not be as accurate as a GPS, so you might face some difficulty there.
Submitted by Badri 'BADJAG' Narayan on Sat, 29/09/2012 - 00:17

Yes, you can download apps for this phone from the Nokia Store at http://www.ovistore.com - however, while there are plenty of apps available there, it has to be said that the range is no match for the Android Google Play store.
Submitted by Badri 'BADJAG' Narayan on Sat, 29/09/2012 - 00:15

This is a subjective question. If you want a smartphone and don't mind a slightly sluggish UI, then go for the GALAXY Y. On the other hand, if you want a clutter free interface, the Asha 311 is for you.
Submitted by Chandrakant 'CK' Isi on Mon, 22/10/2012 - 16:38