For someone familiar with the PC versions of the earlier games, the best way to describe playing Max Payne 3 (MP3) on a console is like having ice cream with chopsticks.That doesn't mean the controls are bad. They are great - for a console shooter, that is. However, it's annoying to fumble around with body shots on a gamepad, when you know you could have been capping goons in the head like a boss with the keyboard and mouse.

Although the PC version hasn't been released as of this writing, I still won't hesitate recommending it. That is, unless they really screw the pooch on it, like was the case with Rage and Arkham City.

The video review for Max Payne 3. A Cinematic Affair
Like a typical Rockstar production, MP3 starts off with a long and stylish cutscene depicting Max suffering from one hell of a mid-life crisis. The unluckiest cop in New York has turned in his badge for a full-time position as an alcoholic frequenting seedy pubs in New Jersey. Fate takes him to Sao Paulo (Brazil), where he's assigned as a bodyguard for the rich and famous. Soon enough, the shit hits the fan and his clients' bodies hit the floor faster than you can say, "obvious excuse plot".

Like its contemporaries, Rockstar has woven the plot with elaborate set pieces and UNCHARTED's brand of dizzying cinematic flair. Unfortunately, Payne's next-gen outing has way too many cutscenes interrupting the gameplay far too often. The newer UNCHARTED games do the same thing, but in moderation and also while holding player interest. MP3's car chases, explosions, and plot twists are exciting beyond doubt, but they aren't as cohesively integrated. Trading Snow And Gloom For Sun And Sand
What you have here is an older, bearded, and raggedy-looking Max going through the same motions of being betrayed and outnumbered - problems that he solves with a steady supply of lead and body bags. The similarity to the original ends there, though. You're in for a disappointment if you expect the same film noir treatment. MP3 trades the snow and gloom of New York for the sun, glamour, and printed floral shirts of Brazil.

It's hard not to sense a thematic disjoint when you have Payne narrating how his life's gone down the shitter one too many times. The atmosphere isn't really conducive for that sort of bleak business. This treatment worked well when it was used judiciously in MP2, but the voiceover abuse makes him sound rather whiny here. One could to relate to Max's pain in the last two games, since it was down to circumstances. However, it's hard to feel sorry for him this time around, when you can clearly see that his situation is a fallout of sheer stupidity and bravado. In effect, the narrative may be slick here, but it isn't as engaging as that of MP2. 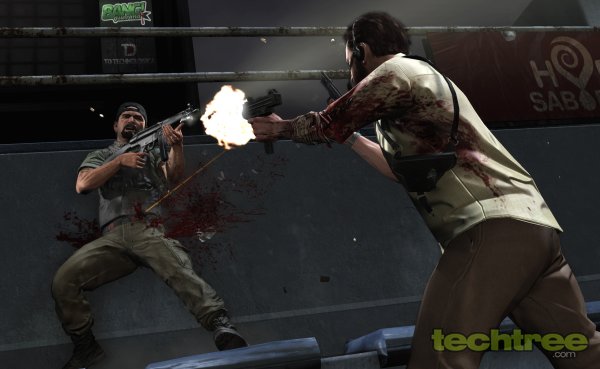 This mode of birth control sure isn't Payneless.

Max McClane
I realised what this game was all about only halfway through it, when Payne transforms into his now famous bald-headed look. The latest instalment may pretend to be Max Payne 3, but it's really a Die Hard 4.0 at heart. Not only does our balding hero look like Bruce Willis, but the whole shebang feels like the movie as well - replete with the quintessential American happy ending. It's definitely out of character. While MP3 may have betrayed the franchise, it's nonetheless exciting as a standalone title.

This is also when other positive aspects of the game come become evident. Everything from the graphics, animation, and physics to gameplay has been improved considerably. The levels look gorgeous and feature a great amount of detail and architectural diversity. Rockstar has done an excellent job of combining physics with a nifty animation system that leverages motion capture for lifelike character animation. A fun and comprehensive multiplayer mode justifies the asking price, as evidenced in the video below.

The Bullet Time and Shootdodge mechanics have been buffed with cosmetic and functional improvements, such as Killcam and Last Man Standing, as well as the ability to stay prone and continue dealing lead long after you're done shootdodging. The former is a fancy slow-motion replay of the last victim in the room, whereas the latter lets you claw back from the dead - provided you can quickly kill the guy who dealt the fatal bullet. It's all fun and games, until your killer's occluded by a wall or a lamp post - and then you're just screwed. But that's just nitpicking. The combat experience overall is quite satisfying.

Not Really Max Payne, But Fun Nonetheless
In a nutshell, what you have here is a modern third-person shooter that builds upon Max Payne's gameplay mechanics rather spectacularly. As a standalone title, the "cinematic narrative" is action-packed and fun, even though it cannot rival the calibre of the last two UNCHARTED games. With a playtime of 10-12 hours, it does feel a bit more long and repetitive than it needs to be. Despite these little blemishes, Rockstar has delivered a thoroughly enjoyable third-person shooter experience. 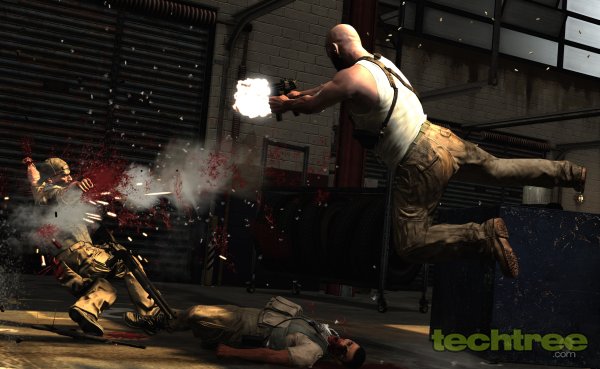 Don't look at it as a Max Payne game and you'll be fine. If the PC version doesn't turn out to be a bug-riddled mess, the joy of scoring headshots with a mouse will easily earn it half a star extra, and thus my recommendation. The console version, however, is best left only for those too familiar with a gamepad to take chances with the keyboard and mouse combo.

While I can't comment on the Indian laws regarding video game rentals, it is legal in the rest of the world. Services like Gamefly do offer games for rent. You can always direct your contextual queries to the comments section, or contact us through Facebook page - http://facebook.com/TechTree Alternatively, you can also send us feedback and suggestions through this link: http://www.techtree.com/content/feedback
Submitted by Nachiket Mhatre on Tue, 22/05/2012 - 13:29

Well, I know only of one Indian video game rental service which was active until recently. However, it was shut down after distributors' complaints. Does that help? As for the legal angle, I can't help you with that, because I'm no lawyer. Speaking of which, you might want to consult one for this query. Although his answer may not be shrouded in bureaucracy, it sure as hell won't be free :)
Submitted by Nachiket Mhatre on Wed, 23/05/2012 - 20:28

Pransh wrote: "You are calling the cut scenes that have always been a part of every Max Payne narrative as repetitive." No, I'm not. Which article have you been reading? More importantly, what have you been smoking while reading that article? Where in this review have I said that the cutscenes are repetitive? Yes, I have said that, and I quote, "Some combat sequences are repetitive", but that's a fact and definitely not what you've misquoted me as. In effect, your sole argument against this article stems from a misquote. It's my humble request that next time please read my articles thoroughly before making a beeline for the comments section.
Submitted by Nachiket Mhatre on Wed, 23/05/2012 - 00:56

interruption (n): something that interrupts, such as a comment, question, or action. repetition (n): the act of repeating; repeated action, performance, production, or presentation. Do you know why these two words have two different definitions in the dictionary? That's because, guess what, they are two different words. Frequent gameplay interruption due to cutscenes isn't the same as repetitive cutscenes. Cutscenes cannot be repetitive. I believe your dissatisfaction with my review stems, for a large part, from your lack of English comprehension skills. Once again, you have blamed me for not pointing out that MP3 has good gameplay, which is an outright lie. Allow me to paste an excerpt from this very review: "In a nutshell, what you have here is a modern third-person shooter that builds upon Max Payne's gameplay mechanics rather spectacularly." Don't get me wrong. I'm not blaming you for commenting, it's just the sheer fallacy of your arguments that bothers me. At any rate, I reserve the right to vindicate myself from false accusations.
Submitted by Nachiket Mhatre on Wed, 23/05/2012 - 10:56

You had originally written: "You are calling the cut scenes that have always been a part of every Max Payne narrative as repetitive." After, I had proven that was incorrect, you now say: "'Far too often' used with a word 'interruptions' often leads a person to believe you were being repeatedly interrupted by cut scenes." You initially accused me of deeming the narrative as being repetitive. Now you go back on your accusation and term it as "frequent interruption by cutscenes" instead. Well, you're not being consistent now, are you? "Repetitive narrative" and "frequent interruption by cutscenes" are two different things. I genuinely can't tell if you're being deliberately obtuse, or do I really have to explain basic semantics to a "well-read consultant" such as yourself.
Submitted by Nachiket Mhatre on Wed, 23/05/2012 - 19:31

It's strange of you to say that when I have been flamed all over the comments section by Max Payne 3 fanboys for writing a review that is critical (and hence different), unlike that of mainstream video game review websites such as Gamespot.com and IGN.com. Don't you think that your copy paste accusation is a bit far fetched considering this fact? Nevertheless, can you please tell me which part of my review has been "copy n paste(ed)" from IGN.com? Or is the while thing "copy n paste(ed)"?
Submitted by Nachiket Mhatre on Mon, 04/06/2012 - 16:09

I suppose you're unaware of the fact that Bruce Willis' character in the Die Hard movie series is called "John McClane". The subheading refers to the fact that Max Payne 3 is more like a generic action game and lacks the style of the earlier titles. Plus, the poster for the game, with a bald-headed and stubbled beard, is an obvious reference to Bruce Willis' look in the posters for Die Hard 4.0. Hope that clears things up. :)
Submitted by Badri 'BADJAG' Narayan on Mon, 03/09/2012 - 20:08
News Corner