Home » Mobiles » Microsoft Cortana To Be Coming To Android In July

Microsoft Cortana To Be Coming To Android In July | TechTree.com

Microsoft Cortana To Be Coming To Android In July

However, there seems to be nothing new for iOS except waiting for an announcement. 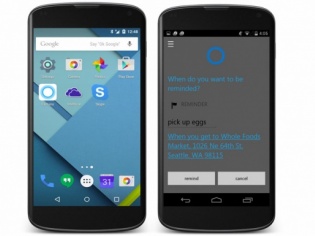 While we had earlier reported that the Microsoft's virtual assistant, Cortana would be making its way to Android and iOS in March, the announcement now is more confirmed and the Cortana companion app will be arriving on Android in July this year.

Having this said, we suspect some features like toggling settings or opening apps won't initially be available in Android.

But, this doesn't mean that the companion app would not be a competitor for Android Now and Apple Siri.

As we had mentioned earlier, while Siri is exclusive to iOS and Google Now available only on Android, Microsoft's Cortana will be available on almost all operating systems including Windows, Android and iOS.

As for iOS, there is still nothing new, except for the earlier announcement which says "later this year".

This move to bring Cortana to Android and iOS is in line with CEO Satya Nadella's mobile-first, cloud-first vision.

To recall, Microsoft has already brought Office and Outlook to Android and iOS.