While BBM isn’t going places, we are delighted to see BlackBerry take an interest in the platform. 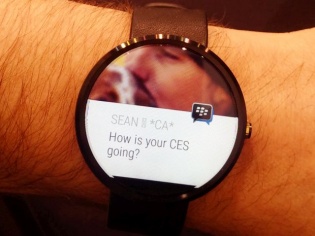 BlackBerry plans to take discreet messaging to the next level with its BlackBerry Messenger companion app for Android Wear-powered smartwatches. The Canadian company announced that it would soon launch the app that seems to be getting polished right now, by early 2015.

Like every other app developer these days that has rolled out support for Android Wear smartwatches, BlackBerry seems to have finally given in an delivered support for the same. The company has now moved a step deeper into the Android platform by introducing BBM for Android Wear.

The app is very similar to the WhatsApp app for Android Wear and will allow you check messages, reply to them and even browse through saved messages with a swipe. BlackBerry takes things a bit further by even letting you review and accept invites while on the move, reducing the need to pull out your smartphone from your pocket.

All-in-all a great companion if your use the BlackBerry Messenger on your Android device.