Home » Mobiles » Autocorrect Leads To Lockdown At US School

Autocorrect Leads To Lockdown At US School | TechTree.com

Autocorrect Leads To Lockdown At US School

Phone corrects "gunna" to "gunman"; prompts police to kick in the doors. 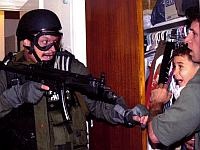 This is a perfect cautionary tale illustrating why it's not just bad etiquette to use SMS lingo, but a catastrophically terrible idea as well. Two schools in Georgia (the one in USA), were locked down by the police after a community member received a rather interesting text message that read, "gunman be at west hall today". The authorities had to secure both West Hall Middle and High schools due to the ambiguous nature of the SMS.

The text message was later traced to a student of the same school. Apparently, the kid wanted to say "I'm going to be at West Hall today", but the syntactically-challenged teen typed "gunna be at west hall today" instead. Since the autocorrect algorithm in the sender's phone was unsullied by the horrors of SMS shorthand, it changed the unrecognised word gunna to the nearest plausible match - gunman. To make matters worse, the message was sent to a wrong number as well, which was promptly reported to the police.

Hilarity ensued, albeit at a great cost to the exchequer and anxiety to the kids and their parents, who are already apprehensive due to the recent shooting in an Ohio school.

That was very fast. I have removed the duplicate word. Thanks for bringing it to our notice.
Submitted by Nachiket Mhatre on Fri, 02/03/2012 - 01:53
News Corner